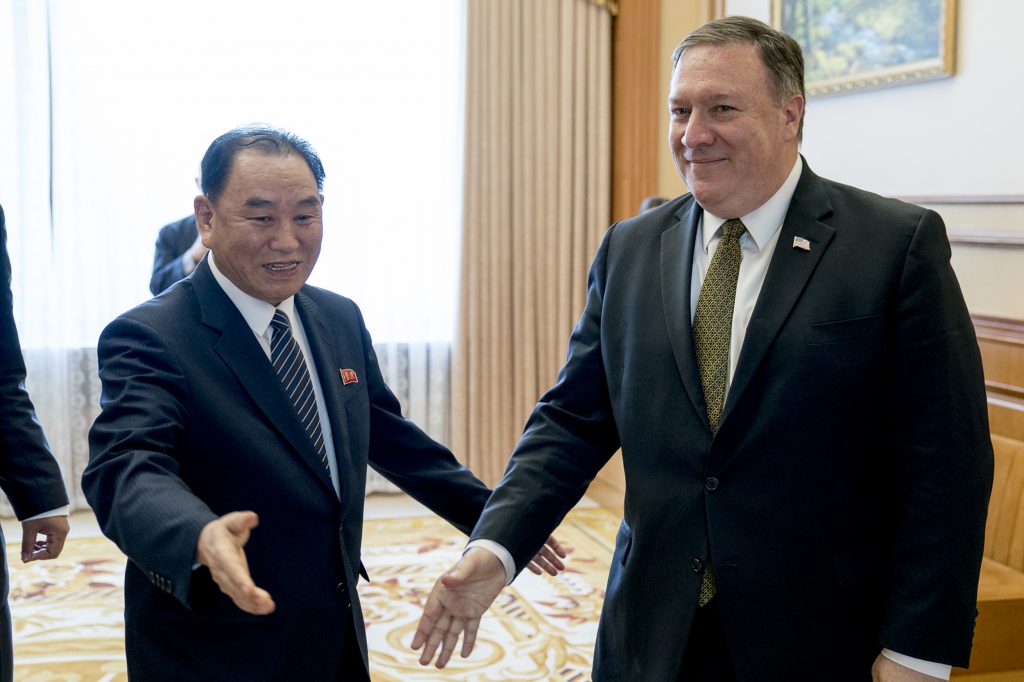 Three North Korean officials, including the top envoy involved in talks with the United States, are booked on a flight to Washington, Yonhap news agency reported on Wednesday, suggesting a possible breakthrough in denuclearization talks.

U.S. Secretary of State Mike Pompeo and senior North Korean official Kim Yong Chol are expected to meet on Thursday or Friday in the U.S. capital to discuss a second summit between their leaders, CNN and South Korean media reported, citing sources familiar with the issue.

A meeting could mean the two sides are nearing a compromise after months of standoff over how to move forward in ending North Korea’s nuclear and missile programs, which it conducted for years in defiance of U.N. sanctions.

A spokesman for the U.S. State Department, asked earlier about the possibility of the top officials from the two sides getting together, said, “We have no meetings to announce.”

North Korean leader Kim Jong Un pledged to work towards denuclearization at a summit with President Donald Trump in Singapore in June, but there has been little significant progress since.

Pompeo planned to meet his counterpart last November, but the talks were called off at the last minute.

Contact was resumed after Kim Jong Un delivered a New Year speech in which he said he was willing to meet Trump “at any time,” South Korea’s ambassador to the United States, Cho Yoon-je, told reporters last week.

The two sides would seek “interim” measures to revitalize the denuclearization process, with North Korea dismissing U.S. demands that it declare all nuclear weapons and facilities, officials in Seoul told Reuters.

If the North took concrete steps toward abandoning its weapons programs, Washington could offer a formal end to the 1950-53 Korean War, humanitarian aid or a permanent bilateral dialogue channel in return, South Korean Foreign Minister Kang Kyung-wha said on Wednesday.

“There are various discussions over U.S. corresponding action, but after all, the United States would have to give something and North Korea take it,” Kang told a news conference.

North and South Korea are technically still at war because their 1950-53 conflict ended in a truce, not a treaty.

Asked whether the United States would accept the North’s dismantling of intercontinental ballistic missiles or a freeze in production of fissile material as an interim step, Kang said denuclearization should be implemented “in stages.”

She also said Seoul was not considering restarting a joint factory park and tours to a mountain resort in the North as a possible concession.

“The North could demand the opening of a liaison office as part of steps to normalize diplomatic ties, a halt of joint military exercises with the South and a resumption of the business and tour ventures,” said Shin Beom-chul, a senior fellow at the Asan Institute for Policy Studies in Seoul.

“For Washington, it would be critical to secure the North’s agreement to collect samples, not just let in experts, which is key to inspection.”

The United States has suspended major joint military exercises with South Korea, though smaller-scale drills continue. Kim Jong Un called for a complete halt to the exercises in his New Year speech.