Israel Israeli Ambassador: Abbas Is No Sadat or Hussein
Israel 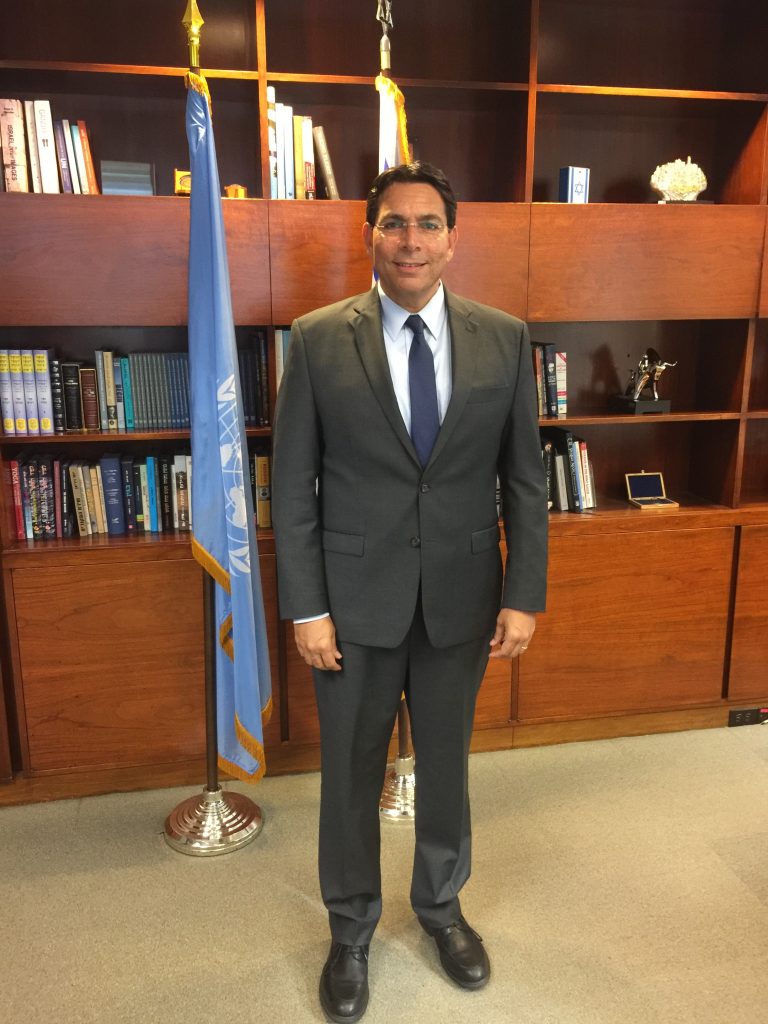 As the United States crafts a long-awaited peace deal between Israel and the Palestinians, Israel’s U.N. ambassador says peace is unachievable until the Palestinians have a leader willing to negotiate a deal with Israel – and Palestinian Authority President Mahmoud Abbas is not that man.

“Anwar Sadat led the Egyptians toward peace; King Hussein did the same [for Jordanians],” said Ambassador Danny Danon, speaking at a briefing for journalists in New York on Wednesday. “We expect one day to find the Anwar Sadat or King Hussein of the Palestinians, who will lead his people to sit down and achieve peace … I think it will take some time until [the Palestinians have] a viable leader, who will tell the people the truth about the future, about the fact [that Israel isn’t] going anywhere, Israel is here to stay, and we need to sit down and negotiate with them. But unfortunately, that is not the case with Abbas.”

The United States’ plan is expected to be released sometime after the Israeli elections in April.

The PA will once again try to gain full recognition at the U.N., which Danon dismisses as a further distraction and attempt to avoid negotiations with Israel.

“We call on the Palestinians to stop with the show, stop with the games, come back to real negotiations and stop with the incitement and the payments for terrorists,” said Danon. “This is the only way to move forward. Coming back to the U.N., they might receive a few headlines, but they will not better the lives of any Palestinian.”

The “state of Palestine,” which has observer status at the United Nations, was elected to chair the U.N.’s Group of 77 developing economies for 2019. Israel is concerned that the Palestinians will use this bully pulpit for purposes other than economics.

The purpose of the G77 is “to promote goals of the developing countries, it is not to take sides in a conflict,” said Danon. “We hope they will not try to take advantage of this position to spread their lies against Israel, [but] I’m not very optimistic about it.”

January 28 is International Holocaust Remembrance Day. The Israeli ambassador will use the opportunity to speak before the General Assembly on that day to highlight a modern-day increase in anti-Semitic incidents.

“Unfortunately, anti-Semitism is on the rise; we cannot ignore it,” said Danon. “And it’s not only in Europe, or the U.S. or Latin America; it’s everywhere. And today, when we have less and less survivors alive that can actually testify and tell their stories, it’s becoming harder. When you have social media, the internet, it is a challenge. It is a challenge for all of us to fight anti-Semitism.”

Referencing this poll, Danon said that in his Jan. 28 speech, he will urge the world body that “it’s not enough to say we condemn anti-Semitism; you have to take sincere action in terms of education,” because “ignorance … leads to hate.”

Shortly after the Holocaust Remembrance events, Danon will fly to Israel with several other U.N. ambassadors, where he will conduct a tour of the Syrian and Lebanese borders, so that the representatives of these countries will better understand the security threats that Israel faces.

Danon said he isn’t overly concerned about President Donald Trump’s decision to withdraw American troops from Syria, as those troops were “not defending Israel,” but protecting other American interests in the region.

“We have never asked … the U.S. to send troops to protect Israel,” said the ambassador. “We are capable of defending ourselves,” and “will continue to take actions that will protect our interests, with or without the presence of the U.S.”

Nikki Haley, who recently stepped down as U.S. ambassador to the U.N., was seen as a great friend of Israel, and Danon said he is confident that President Trump’s new appointee for the position, State Department spokeswoman Heather Nauert, will also be a close ally of the Jewish state.

To those pointing to Nauert’s lack of experience as a diplomat, Danon noted that neither he, a former MK, nor Haley, a former governor of South Carolina, had such experience either, prior to their ambassadorships.

“Heather Nauert served now for two years in the State Department; she was involved in the issues; she visited Israel,” said Danon. “And speaking with my colleagues who hosted her in her trip to Israel, I believe she will be committed to the values of the U.S. and to supporting Israel.”

Danon recently decided to remain in his position rather than return to the Knesset in the April elections. But he made no secret Wednesday of his plans to eventually return to Israeli politics.

“We will have another election in Israel,” said the ambassador, “and I intend to be involved in the public life.”

Asked if he would seek to become prime minister, Danon said, “I plan to be involved. You can write whatever you want, but for me being involved is being active.”

If “you will look at the list of ambassadors who served in this room,” said the ambassador, “one of them became a president [Chaim Herzog], one of them became a minister of foreign affairs [Abba Eban], one became prime minister [Netanyahu]. So, many people in my position, when they go to public life, yes, they seek higher positions in life.”