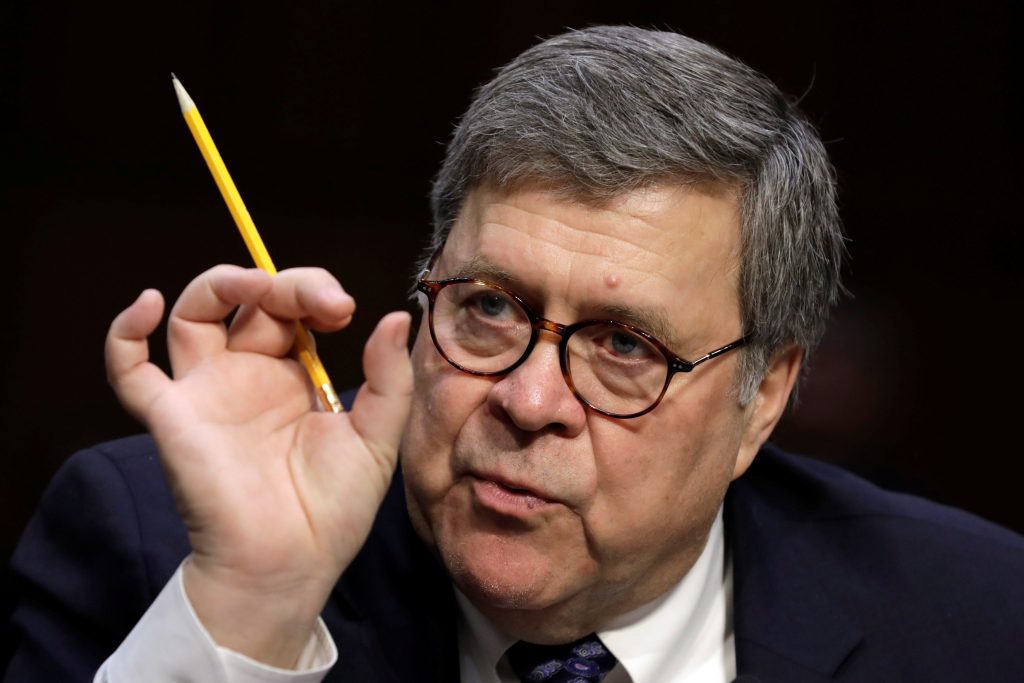 President Donald Trump’s nominee for attorney general asserted independence from the White House on Tuesday, saying he believed that Russia had tried to interfere in the 2016 presidential election, that the special counsel investigation shadowing Trump is not a witch hunt and that his predecessor was right to recuse himself from the probe.

Those comments by William Barr at his Senate confirmation hearing pointedly departed from Trump’s own views and underscored Barr’s efforts to reassure Democrats that he will not be a loyalist to a president who has appeared to demand this from law enforcement.

Some Democrats are concerned about that very possibility, citing a memo Barr wrote to the Justice Department before his nomination in which he criticized special counsel Robert Mueller’s Russia investigation for the way it was presumably looking into whether Trump had obstructed justice.

Sen. Dianne Feinstein of California, top Democrat on the Senate Judiciary Committee, told Barr the memo showed “a determined effort, I thought, to undermine Bob Mueller.” The nominee told senators he was merely trying to warn Justice Department officials against “stretching a statute” to conclude that the president had obstructed justice.

Trump has repeatedly castigated Mueller’s investigation, calling it a “witch hunt,” and lambasted and ultimately pushed out his first attorney general, Jeff Sessions, for removing himself from the matter because of his work with the 2016 Trump campaign.

“I will not be bullied into doing anything that I think is wrong, whether it be by editorial boards, Congress or the president,” Barr told senators on the Judiciary Committee. He said that, at 68 years old and partially retired, “I feel that I’m in a position in life where I can do the right thing and not really care about the consequences.”

Barr repeatedly praised Mueller, who has been investigating whether the Trump campaign coordinated with the Kremlin to sway the election, and said he would not undermine his work. He called him a friend of 30 years and said he couldn’t imagine that Mueller would do anything that would justify his firing.

“I don’t believe Mr. Mueller would be involved in a witch hunt,” he said when asked by the Republican chairman of the committee, Sen. Lindsey Graham of South Carolina.

At issue for Democratic senators is whether Barr can oversee without bias or interference the final stages of Mueller’s probe into potential ties between Russia and the 2016 Trump campaign. Feinstein said the nominee’s past rhetoric in support of expansive presidential powers “raises a number of serious questions about your views on executive authority and whether the president is, in fact, above the law.”

Barr would oversee the final stages of the investigation. He said he would consult with ethics officials on whether he would need to recuse because of a critical unsolicited memo to the Justice Department last year, but the decision would be ultimately his.

He also disclosed having discussed Mueller with Trump during a meeting in 2017 when Barr declined to join his legal team. Trump wanted to know what Mueller, who worked for Barr when he led the Justice Department between 1991 and 1993, was like.

“He was interested in that, wanted to know what I thought about Mueller’s integrity and so forth and so on,” Barr told senators. “I said Bob is a straight shooter and should be dealt with as such.”

Barr also said “it is vitally important” that Mueller be allowed to complete his investigation and that Congress and the public should learn the results. He also insisted that Trump never sought any promises, assurances or commitments before selecting him to be the country’s chief law enforcement officer.

“I believe it is in the best interest of everyone — the president, Congress, and, most importantly, the American people — that this matter be resolved by allowing the special counsel to complete his work,” Barr said.

He also defended his decision to send an unsolicited memo to the Justice Department criticizing Mueller’s investigation into whether the president had sought to obstruct justice. He said he raised his concerns at a lunch last year with the deputy attorney general, Rod Rosenstein, who appointed Mueller and oversees his work. Rosenstein did not respond and was “sphinx-like,” Barr recalled.

He said he followed up with a memo to Rosenstein in June that argued that Mueller should not be able to interview the president about his decision to fire James Comey as FBI director. He said there were other instances in which he had given advice to the Justice Department, such as cautioning against a prosecution of Democratic Sen. Robert Menendez.

The special counsel is required to report his findings confidentially to the Justice Department. Barr stopped short of directly pledging to release Mueller’s report, but he expressed general support for disclosing the findings.

“For that reason, my goal will be to provide as much transparency as I can consistent with the law,” Barr said. “I can assure you that, where judgments are to be made by me, I will make those judgments based solely on the law and will let no personal, political, or other improper interests influence my decisions.”

Barr’s supervisory role in the Russia probe may be especially important because Rosenstein, who appointed Mueller and has overseen his day-to-day work, expects to leave the Justice Department soon after Barr is confirmed. It is not clear how much of the investigation will be left by then.

Barr would replace acting Attorney General Matthew Whitaker, who declined to recuse himself from the investigation.

Barr’s June memo to top Justice Department officials criticized as “fatally misconceived” the theory of obstruction that Mueller appeared to be pursuing. He said presidents cannot be criminally investigated for actions they are permitted to take under the Constitution, such as firing officials who work for them, just because of a subjective determination that they may have had a corrupt state of mind.

Barr said the memo was narrowly focused on a single theory of obstruction that media reports suggested Mueller might be considering. Barr said he wrote it himself “as a former attorney general who has often weighed in on legal issues of public importance.”

“The memo did not address — or in any way question — the special counsel’s core investigation into Russian interference in the 2016 election,” Barr said.