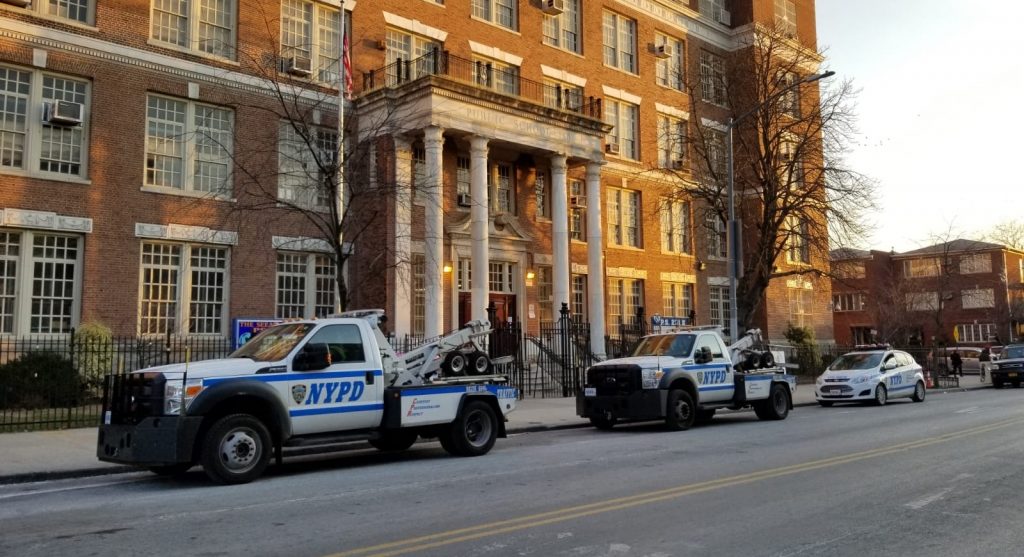 An Open Letter From Community Leaders

Much has been said about the widely publicized incident that took place last week when community members removed an about-to-be towed car from an NYPD tow truck and urged the driver to flee the scene before making disparaging comments to an NYPD tow truck operator who was just doing his job. Over the last few days, police tow trucks have been out in force in Boro Park, but the idea that the NYPD is exacting revenge for what happened this past Thursday is a very grave error.

We have been in close contact with the NYPD who is very much aware of a massive scam that is taking place in various communities involving bogus inspection stickers and doctored registration decals. There are vehicles on our streets that have these fake stickers and the NYPD is out there looking for them and for their owners, many of whom owe thousands of dollars in fines on their cars.

In Boro Park alone, the NYPD is combing the streets looking for many of these vehicles and their owners, whose identities are known to them. An SUV that was towed today in Boro Park, whose picture has been circulating on social media and elsewhere, had no registration sticker in the window, its license plate revealing $3,025 in accrued violations. Another person who was arrested after police towed his car had accumulated over $16,000 in fines.

The NYPD and its tow trucks have their eyes on Boro Park, but they are not retaliating for last week’s disaster. They are here because of problems of our own making – people in our community who are deliberately and flagrantly violating the law, producing fake inspection stickers on high tech machinery, and creating counterfeit registration stickers. And once police are already out with their tow trucks because of this scam, they are coming down hard on illegally parked cars, which instead of just being issued summonses, are also being towed. Those fraudsters who think they are pulling a quick one with those fake decals? They are the the primary reason for the rash of towing in the last few days and not anyone else.

Cars parked illegally, in front of or near fire hydrants, are another cause of the recent crackdown. By law, a 15 foot clearance is required on either side of a hydrant and parking any closer than that to a pump, on either side, is illegal. There is no question that parking is difficult in our area, but the law exists to save lives, not to create emergency spots for private vehicles. It is not lost on the NYPD that people have been parking in front of hydrants overnight, assuming that no one will be writing tickets at that time of the day, and they have every intention of issuing summonses and towing any car they find 24/7 that is parked less than 15 feet from a fire hydrant.

These practices of bending or breaking the law to suit our own purposes create an enormous chilul Hashem and they need to stop immediately.

If you are in possession of any doctored inspection or registration stickers, we strongly suggest that you clean up your act now, before the NYPD comes after you and, make no mistake about it, they know who you are. Get your car legally inspected and registered. Pay any outstanding fines you owe. And for those responsible for these unethical and immoral schemes, we need you to wake up and realize that what you are doing is unacceptable and the entire community is paying the price for your unmitigated greed and incredible foolishness.

Finally, know that if you park in front of, or too close to a fire hydrant, your car may not be there when you come back and that not only may you be facing a hefty fine, you could also be responsible for loss of life in case of a fire.

We are here in this world to be a light unto the nations.