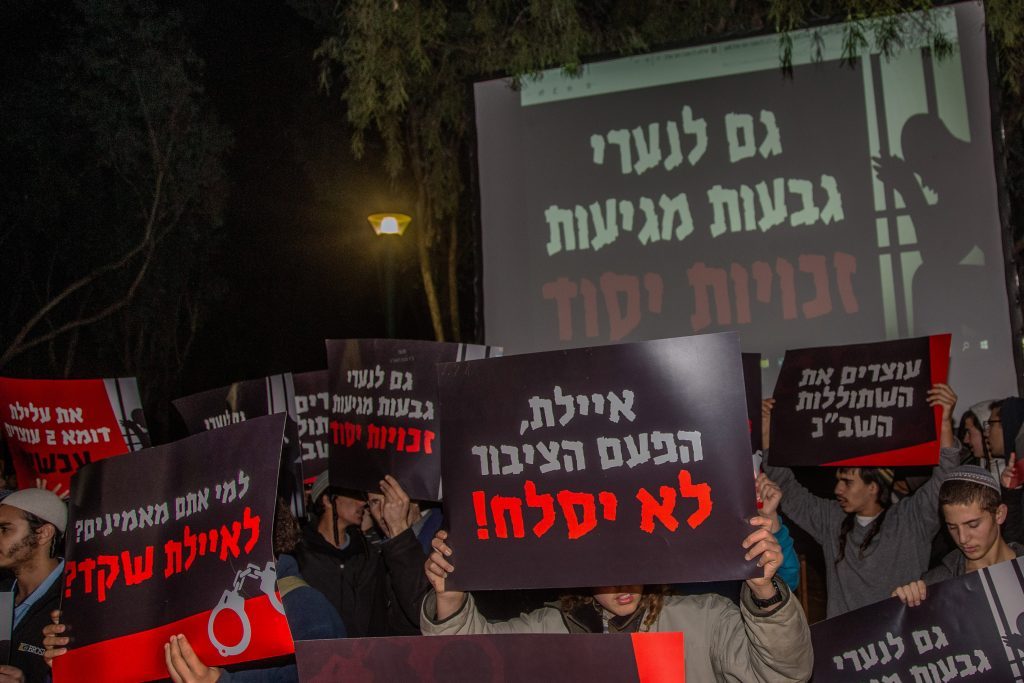 It was Friday night, Parashas Noach, three months ago. The Alrabi family car was traveling on Highway 60 in the heart of the Shomron when suddenly a large rock struck the windshield and killed the mother of the family.

The town nearest to the road was a tranquil place named Rechelim. The police did not suspect that the religious Jews of the town would throw stones on Shabbos, and therefore, they focused their initial investigation on the more distant Arab town, Yatma. But upon deeper thought, the police realized that due to the tense situation in the region — that very week two Jews had been murdered in the Barkan industrial zone — it was apparently an act of retaliation.

The GSS remembered that Jewish youths had arrived that week at the Tapuach Junction, blocked the road and threw stones. The GSS, which followed them, discovered that they belonged to Yeshivat Pri Ha’aretz located in Rechelim. A quick calculation reached the conclusion that those youngsters were apparently the perpetrators. By Shabbos morning, security forces appeared at the yeshivah, but when they saw that the students were all still sleeping they promised to return on Motzoei Shabbos.

However, this is where the story takes an interesting turn. A few hours after the GSS visit, a car was seen leaving the town of Yitzhar, some 15 kilometers to the north. On Shabbos, the car drove up to the yeshivah and a few radical right-wing activists emerged, including the person known as the “leader of the hilltop youth,” Meir Ettinger. This development changed the whole picture of the suspicions. From that point on, the claim that they “don’t desecrate Shabbos by throwing stones” lost its validity.

Ettinger is a grandson of the right-wing leader Rabbi Meir Kahana, Hy”d. He became famous during the murder in the village of Duma four years ago, when, in a retaliatory act, firebombs were thrown at homes in Duma, killing a set of parents and their baby son. The GSS claimed then that even if Ettinger was not directly involved in the event, the ideology he disseminates and his interpretation of the vision of his grandfather encourages acts of terror against Arabs.

Ettinger’s Rav is Rav Yitzchak Ginsburg, Rosh Yeshivat Od Yosef Chai in Yitzhar, who developed a unique path that combines an emphasis on settlement of Eretz Yisrael with opposition to the state and its institutions. Rabbi Ginsburg explicitly disagrees with violence against Arabs by individuals, but some interpret his words otherwise. Yeshivat Pri Ha’aretz in Rechelim is also under the aegis of Rav Ginsburg.

From the time it became known in Yitzhar that the GSS had visited the yeshivah, the leaders of the hilltop youth decided to take action. “We know that the GSS treats its Jewish detainees with a lot of cruelty,” these leaders would explain afterwards. “In the past, they have put youths in solitary confinement and interrogated them so harshly that they wanted to take their own lives. It’s pikuach nefesh. Those people asked one of the Rabbanim of the yishuv and he permitted them to travel on Shabbos to provide chizuk to the boys and to prepare them for the interrogation.”

When the GSS returned to the yeshivah on Motzoei Shabbos, they found a lawyer waiting there. The lawyer prevented the interrogation and told the GSS they had to leave until they had a search warrant from a judge and the agreement of the parents. The GSS said that when they asked for videos from the security cameras of the yishuv from the night of the incident, they found that the footage had been erased.

The GSS decided to delve into this incident. Seventy members of the yeshivah were interrogated over three months; most were not even allowed to meet with a lawyer. Ultimately, five of them were arrested on suspicion of throwing stones. This week, four were released and one remains in detention.

Alongside the overzealousness of the hilltop youth, we have to remember that the second side is not clear of wrongdoing by any stretch. The GSS behaves obsessively, in an overly authoritarian and harsh fashion towards the settlers. Ettinger, who was in administrative detention, was not allowed out for his oldest son’s bris, and in the end, when it was all over, he was released for lack of evidence.

The hilltop youth are certainly not free of blame, but neither are the GSS investigators.