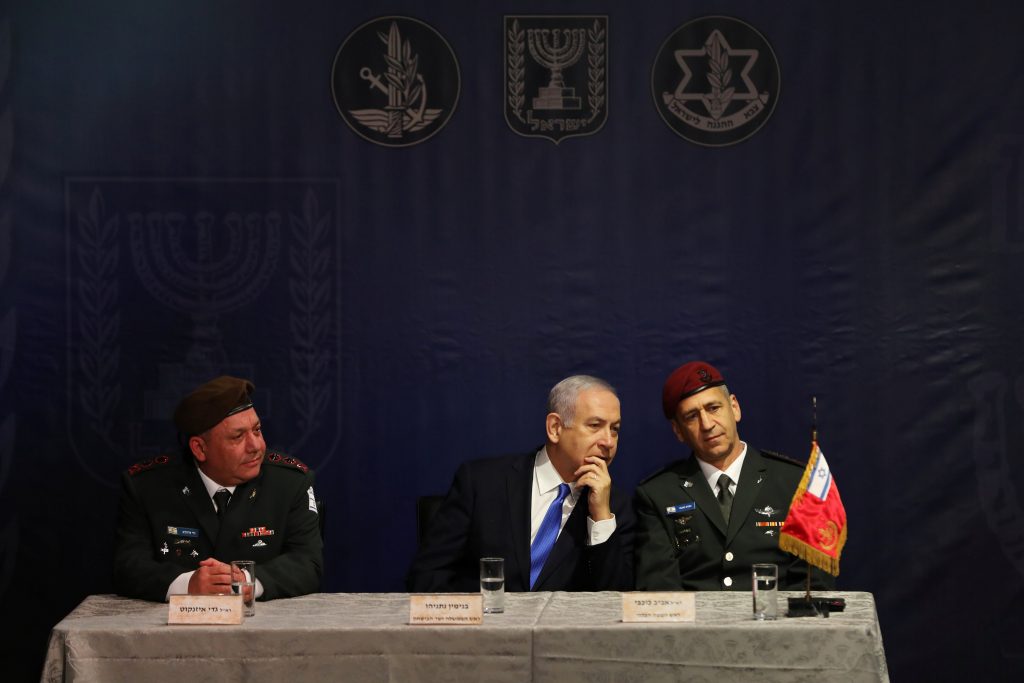 At a gala ceremony Tuesday at the Defense Ministry in Tel Aviv, the IDF’s new Chief of Staff, Aviv Kochavi, was promoted to the rank of general, in the first part of the installation ceremony that by the end of the day will see him as commander of the Israel Defense Forces.

Speaking at the ceremony, Kochavi said that he saw the job “as a holy responsibility and a privilege, a privilege for which I owe thanks to many.”

The incoming chief of staff promised to “dedicate my entire being to strengthen the defenses of Israel and to ensure that they match the challenges we face. I love the IDF and its soldiers, and I intend to lead it together with the rest of the General Staff with a view to our national responsibility.”

Outgoing IDF Chief of Staff Gadi Eisenkott said that he was leaving Kochavi a good-functioning army that was capable of meeting the challenges facing the country. “Over the years I have seen it as my responsibility to fulfill many missions, with an overarching need to bring soldiers home safely. I look back at the army I leave behind and I see one that operates on numerous fronts, and that has proven that its desire to emerge victorious is a supreme value. The most important thing is to ensure that the IDF remains something that all Israelis can agree upon and see as representing them. We have shown that the IDF is responsive to the concerns of the people, we accepted all criticism that was useful and acted upon it.”

Prime Minister Binyamin Netanyahu also welcomed Kochavi at the ceremony, taking the opportunity to lay out some of the challenges Kochavi will face. “Over the past four years we have face many great challenges,” Netanyahu said. “The challenges we face in Syria, Gaza, Lebanon, and other places are changing, but we face one great central challenge – Iran, and its terrorist satellites. I would recommend to Iran that they quickly leave Syria, because we intend to continually implement our tough policies on the situation there without hesitation.”

On Sunday, Netanyahu confirmed that Israeli planes had attacked Iranian warehouses in southern Syria over the weekend. Speaking at the start of Sunday’s Cabinet meeting, Netanyahu, during an official farewell to Eisenkott, said that he and the CoS “have worked together to prevent the establishment of Iranian military forces in Syria. In the framework of that effort the IDF has hit targets there hundreds of times. Under your leadership, we have achieved many goals. Just in the past 36 hours the IDF hit Iranian targets in Damascus.”