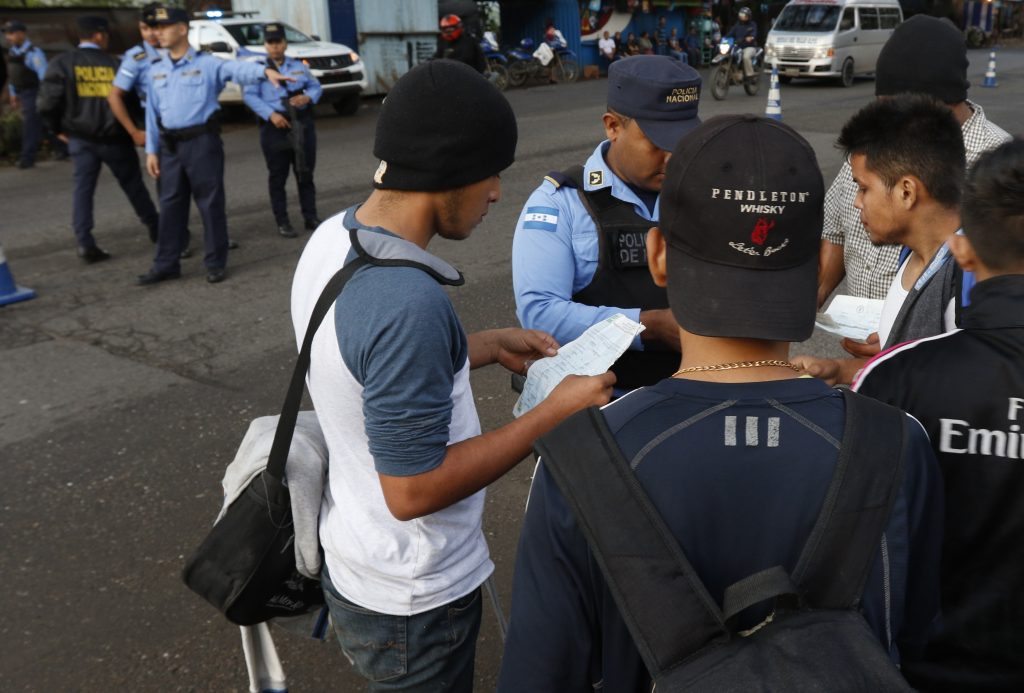 An estimated 2,000 migrants formed a caravan in this northern Honduran city late Monday and early Tuesday and set off toward the U.S.-Mexico border, where thousands of migrants from last year’s caravans continue to wait to apply for asylum in the United States.

The migrants departed amid intense debate over immigration and a wall on the United States’ southern border that has prompted a partial government shutdown. The caravan that left Honduras in October drew the ire of President Donald Trump, who used the 7,000 migrants traveling north as a key rallying point in his push for wall funding. He has used similar rhetoric with the new caravan.

Hondurans traveled from all over the country to the bus terminal in San Pedro Sula this week after learning about the journey from a flier circulating on social media and local news reports.

The announcement called for a 5 a.m. departure Tuesday morning, but a crowd that had started gathering Monday afternoon abruptly departed by 8:30 p.m. and headed toward the Guatemalan border. Honduran aid workers estimated that the initial group numbered around 2,000, with several hundred more departing early Tuesday.

In the crowd Monday evening was Jimmy Senteno, who carried a small red backpack, and his 5-year-old daughter on his hip. As the 23-year-old wiped sweat from his forehead, he said, “I want to apply for asylum in the U.S., but I would stay in Mexico if I had to.” Unable to find work or leave his house due to gangs in his hometown of Comayagua, Senteno said he saw no other option but to leave. “I know only some in the last caravan made it, but I have to try.”

Soon after the caravan departed, it began to rain, continuing for hours and dampening the once-euphoric mood. Some hitched rides or got on buses headed toward towns closer to the border. Others stopped by the side of the road, unsure of their next move.

As late as 1 a.m., clusters of migrants were still scattered along the dark highway. Entire families, women holding babies, mothers and fathers pushing strollers, teenage boys and others held their thumbs out for a ride. Most were confused about why the group left when it did or where they were going to spend the night.

Lilian Palmera, 46, left Olancho, in eastern Honduras, the day before with 11 members of her family, the youngest her 8-month-old granddaughter.

“The last caravan was only good for some people, but we want to try our luck because it’s impossible to live where we are from with crime and poverty,” she said, sitting by the side of the dark road under a dim light about 15 miles outside of San Pedro Sula. “I don’t know where we are going right now, but we’ll get to the Guatemalan border and then north to the United States, for a better life.”

“There’s no organization, but we are just trying to accompany them so they have a bit of protection,” said Luis Rivera, a lawyer who works for the commission.

For migrants like Palmera, caravans offer a cheaper and safer alternative to trekking north with expensive and unreliable smugglers or on their own, which leaves them vulnerable to organized criminal groups who often prey on those traversing Mexico.

An announced U.S. policy change that would require asylum seekers to remain in Mexico while their claims are being processed has yet to be implemented, and word of the potential shift had not reached many in the group. While aware that thousands of Hondurans have been held up for months in Tijuana, many said their plan was to reach the United States, but that they were willing to wait, or stay and work in Mexico.

The Mexican government has been preparing for the group’s arrival. Late last week, Mexican immigration officials, including agency head Tonatiuh Guillen, traveled to Tegucigalpa, Honduras, to meet with Honduran academics and organizations working on migration issues.

Mexico’s Interior Minister Olga Sanchez Cordero at a news conference last week said the government planned to deploy guards to 370 illegal crossing points at the border with Guatemala, and official points of entry would be “controlled to prevent the entry of undocumented people.” She said those who registered would be offered visas to stay and work in the country or travel toward the U.S. border with migration officials.

In October, Mexico closed the main border crossing when the caravan arrived, causing a scuffle between authorities and migrants. Authorities then allowed thousands to swim across the river separating the country from Guatemala and travel north.