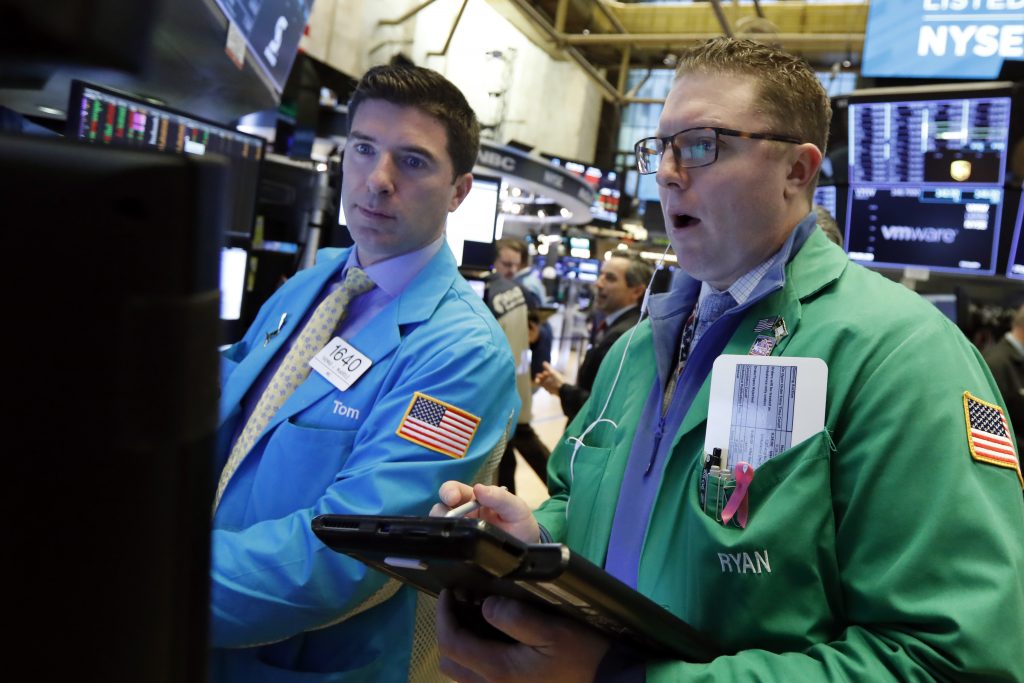 Stock markets around the world are down Monday after China reported a drop in exports in December. Fears about the health of China’s economy and the global economy overall were a major contributor to the stock market’s plunge in late 2018.

Newmont Mining fell after agreeing to buy Canada’s Goldcorp in a $10 billion deal that will create the world’s largest gold mining company, and Citigroup rose after a strong quarterly report. USA Today publisher Gannett soared after getting an unsolicited takeover offer.

The S&P 500 dropped almost 20 percent from late September until Dec. 24, partly because investors were worried that the global economy was slowing down dramatically and could go into a recession soon. Since Dec. 26, stocks have regained about half of what they lost in the downturn, but investors remain sensitive to signs of economic trouble.

CHINA TRADE: China’s exports slipped in December, and exports to the U.S. fell 3.5 percent as rising tariffs and broader weakness affected the world’s second-largest economy. Negotiators from the U.S. and China met earlier this month for three days of trade talks, but it’s not clear how much progress was made or when the two sides will meet again.

Apple fell 1.5 percent to $149.99. The company’s shares tumbled last month after it said sales in China were falling. Wynn Resorts, which runs casinos in Macau, slumped 4.4 percent to $108.56.

The Trump administration is pursuing its own plan to lower drug prices by approving more generic medications and trying to do away with industry practices that allow manufacturers, insurers and pharmacy benefit managers to profit at the consumer’s expense.

BREXIT: British lawmakers prepared to vote on Prime Minister Theresa May’s deal covering Britain’s planned departure from the European Union. All indications are that she will lose Tuesday’s vote heavily. The debate and vote could lead to volatility for U.K. markets, particularly the pound.

POWERING DOWN: PG&E, the parent of Pacific Gas and Electric, said it will file for Chapter 11 bankruptcy protection and its stock plunged almost 50 percent. It faces potentially colossal liabilities over deadly wildfires in 2017 and 2018 and had announced the resignation of CEO Geisha Williams on Sunday. The company says deliveries of natural gas and electricity shouldn’t be affected.

PG&E stock dropped 47.3 percent to $9.27 in heavy trading, leaving the company’s market value at about $4.8 billion. Its value has tumbled by $20 billion since November, when reports indicated PG&E had a power outage around the time and place the deadly Camp Fire began. That blaze killed at least 86 people and destroyed 15,000 homes.

ALL MINE: Newmont Mining will buy Canada’s Goldcorp for $10 billion, creating the world’s biggest gold miner. Miners are consolidating as gold becomes more expensive to procure. Barrick Gold said it would buy Randgold for more than $6 billion four months ago. Goldcorp rallied 7.7 percent to $10.43 while Newmont fell 8.2 percent to $32.02.

EXTRA, EXTRA: Gannett, the publisher of USA Today, rocketed 19.6 percent to $11.67 after a media group said it offered to buy the company for $1.36 billion. Gannett said will review the proposal from MNG Enterprises, better known as Digital First Media.

The Wall Street Journal was first to report that the hedge-fund backed MNG has built up a 7.5 percent stake in Gannett, and that it has been rebuffed repeatedly by the company about a sale.

BONDS: Bond prices were little changed. The yield on the 10-year Treasury note remained at 2.69 percent.