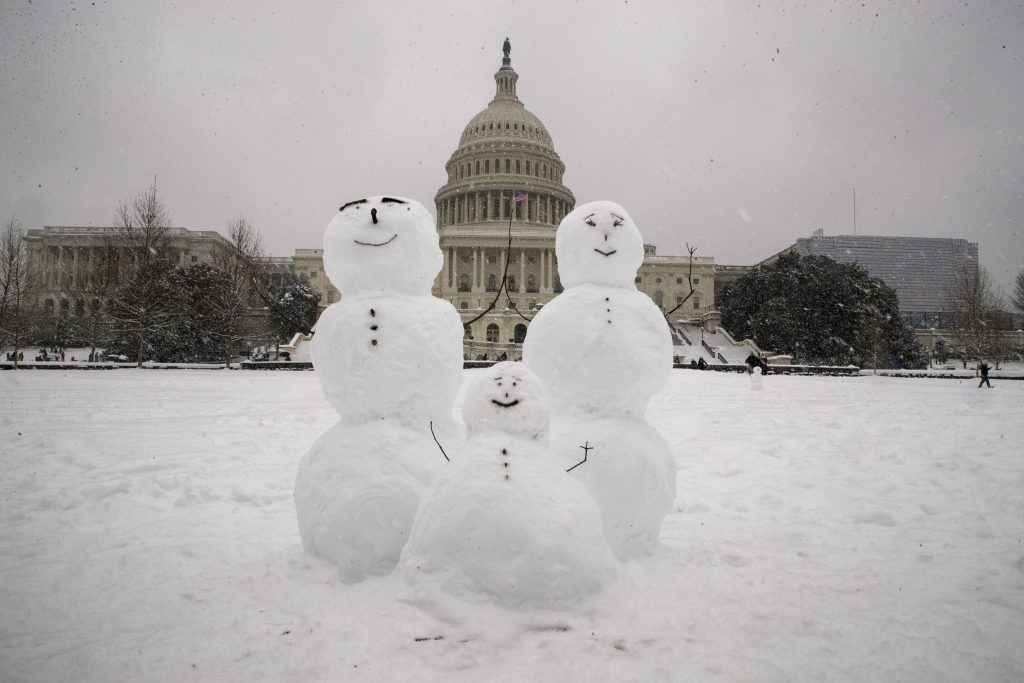 At least nine people, including a state trooper who was responding to a crash, have been killed amid a winter storm that has battered the Midwest and continues to dump several inches of snow in the Washington, D.C., metro area.

The storm that began in parts of the Midwest on Friday snarled traffic on highways with a deadly mix of sleet and slush, left thousands without power and canceled dozens of flights. It has left dozens of casualties in its trail as it moved eastward, dropping six to seven inches of snow in parts of Maryland and Virginia.

Missouri took the brunt of the damage, logging more than 800 snow-related crashes that injured 57 and killed four, according to the Missouri State Highway Patrol. Among those killed were a 53-year-old woman and a 14-year-old relative. Authorities say the woman lost control while driving on a snow-covered road in rural Missouri on Friday and drifted into the path of an oncoming vehicle.

In a suburb of Chicago, Illinois State Police Trooper Christopher Lambert was standing outside his patrol car Saturday at the scene of a three-car crash when a driver struck him, authorities say. Lambert, a five-year veteran of the state police who previously served in the army, died later at a hospital. The state police said earlier Saturday that they have responded to more than 200 snow-related crashes, including one other fatality.

“Trooper Lambert deliberately placed his vehicle in a position to protect the lives of the victims of the previous crash, and took on the danger himself,” Illinois State Police Director Leo P. Schmitz said in a statement. “He will be remembered for his dedication to the Illinois State Police and for giving the ultimate sacrifice to protect and serve the citizens of Illinois.”

Three storm-related deaths have been reported in Kansas, including a crash involving a 62-year-old man who lost control along the Kansas Turnpike. His vehicle rotated counterclockwise before crashing into a barrier wall, according to the Kansas Highway Patrol.

The storm barreled through parts of the Midwest on Friday night, with eastern Kansas and western Missouri seeing their highest snow totals in several years, according to the National Weather Service. The storm dumped more than a foot of snow in several parts of Missouri and nearly two feet in one city.

In Columbia, Missouri, University of Missouri officials shut down the campus ahead of the storm Friday.

The Midwest appeared to be out of the woods as of Sunday afternoon. But conditions are expected to worsen in the evening in the Washington, D.C., area, which is experiencing its first major snowfall of 2019.