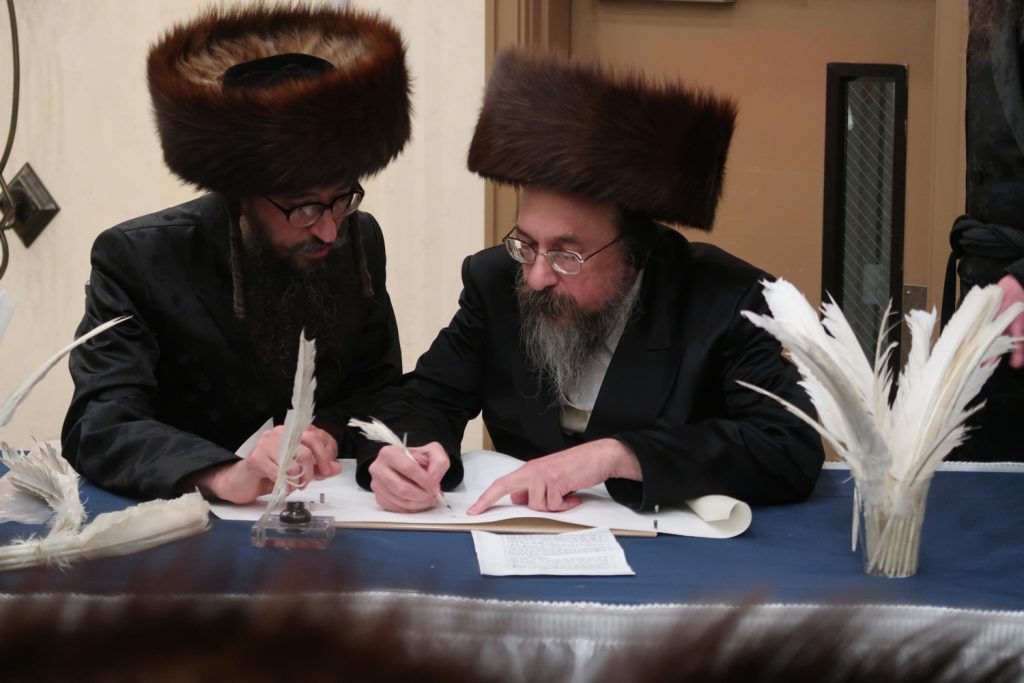 Harav Asher Zelig Greenberg, zt”l, Rosh Yeshivah, Yeshivas Shaarei Ephraim of Monsey, was niftar on Shabbos. He was 65 years old and had been suffering from an illness for several years.

In the decades that Rav Greenberg led Shaarei Ephraim, he served as a Rebbi and mentor to hundreds — if not thousands — of talmidim, building generations of chassidishe bnei Torah.

A master of Shas and Poskim, who served Hashem with a simple and complete dedication, he was the model of a talmid chacham and an oved Hashem, whose harbotzas haTorah made a mark not only on his many talmidim, but on the Monsey community and well beyond.
“He was a real yerei Shamayim who lived with pure emunah,” said a relative of Rav Greenberg. “A baki b’Shas and Poskim, with a unique chein that made him beloved by all.”
Rav Asher Zelig was born in 1953 and grew up on New York’s Lower East Side. His father, Reb Leibish, z”l, was a Belzer chassid who hailed from the Galician town of Lantzut. A model of the “chassidishe Yid” of old, Reb Leibush was a fixture of his local Belzer shtiebel and served as the gabbai for Reb Meir Baal Haness Kollel Chibas Yerushalayim. His mother was a daughter of the Lifsha Rav, Harav Moshe Greensweig, Hy”d, a son of Harav Asher Zelig Greensweig, Hy”d, Rav of the Romanian town of Dalha, who became known by the name of his sefer, Bais Asher.
Recognized for his sharp mind and tremendous hasmadah from his youth, young Asher Zelig spend several years studying in Yeshivas Shaarei Yosher under its Rosh Yeshivah, Harav Yosef Rosenblum, zt”l.
In the mid-1970s Rav Asher Zelig married Chayah Oshry, the daughter of Harav Ephriam Oshry, zt”l, Rav of Beis Medrash Hagadol and author of She’eilos U’Teshuvos Mimaamakim. Prior to the marriage, Rav Oshry, a talmid of the pre-war Slabodka Yeshivah, was taken by the bachur’s thorough knowledge of masechtos in Shas, and until the end of his life took great pride in his son-in-law.
For the many years of their marriage, Rebbetzin Greenberg supported her husband with great dedication, tended to their growing family and saw to it that he could remain dedicated to Torah and avodah with as few distractions as possible.
The couple spent the first year after their marriage in Eretz Yisrael, where Rav Asher Zelig studied in the Belzer Kollel. Upon their return to America, the Greenbergs settled in Monsey, where Rav Asher Zelig joined the elite group that comprised the kollel of Beis Medrash Elyon.
He would later study in the kollel of Machon l’Horaah and would play a key role in the founding and early direction of Monsey’s Belzer cheder.
In the mid-1980s, Rav Greenberg was chosen by, ybl”c, Harav Ezriel Tauber, shlita, to lead a yeshivah that he had opened in tandem with Machon l’Horaah for select bachurim, aimed at training them to master large sections of Shas, as well as training them in analyzing sugyos b’iyun.
After several years, direction of the yeshivah was given over entirely to Rav Greenberg, who eventually renamed the mosad as a tribute to his father-in-law, Shaarei Ephriam.
In his years as Rosh Yeshivah, Rav Greenbaum delivered shiurim that delved into sugyos and focused on reaching clarity in the approaches of various Rishonim, understanding the depth of each and the differences between them. In keeping with the original goal of the yeshivah, he personally administered regular exams on large tracts of blatt Gemara that were learned in the demanding bekius program of the beis medrash.
In addition to the high standards he set in limud haTorah, the Rosh Yeshivah in word and far more in deed, demanded the yiras Shamayim, kedushah and taharah that he himself exemplified.
Rav Greenberg maintained a close bond to his many talmidim, carrying their needs and challenges on his shoulders and making himself available to offer his sage advice. Many kept a close connection to him long after leaving yeshivah, and as witness to the unique culture created in the beis medrash, shuls of alumni exist in both Boro Park and Williamsburg.
Though Rav Greenberg suffered from a serious illness for the last five years, it did little to slow his avodas Hashem, as he maintained his many regular sedarim and continued to place the same emphasis on earnest tefillah and mitzvos.
The Rosh Yeshivah was niftar on Shabbos morning and the levayah was held Motzoei Shabbos at Yeshivas Shaarei Ephriam. Kevurah took place in the beis hachaim of Shikun Skver.
Rav Greenberg is survived by, ybl”c, his wife, Rebbetzin Chayah Greenberg; sons, Harav Moshe, Harav Yaakov Aharon, Harav Shalom Pesach and Harav Yisrael Chaim; daughters, Mrs. Reizel Leah Wagschal, Mrs. Rochel Hager and Mrs. Sarah Laufer, as well as by many grandchildren and several great-grandchildren.
Yehi zichro baruch.