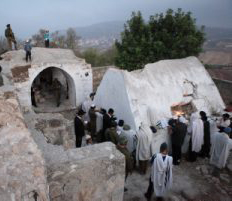 Nearly 500 Jews, accompanied by IDF soldiers, entered the village of Awarta, outside Shechem, on Thursday night, in order to daven at the kevarim of several luminaries interred there – among them Elazar and Itamar, sons of Aharon Hacohen, and the Shiv’im haZekeinim. 5 Shevat is the hilula for the Shiv’im Zekeinim.

Commenting on the event, Shomron Council head Yossi Dagan said that it attracted people from all religious backgrounds, and was a unifying event. “We have come to the site where the great leaders of Israel are interred, the spiritual and national leaders who were partners in raising the Jewish people. From here we embrace and grow closer to our roots, and these are the things that give us the strength to build our land.”

Overnight Thursday, security officials said they arrested four wanted security suspects in other areas in Yehudah and Shomron. The suspects were wanted for participating in rioting and throwing stones and firebombs that endangered Israeli civilians and IDF soldiers. Several of the suspects were also charged with belonging to Hamas. All were being questioned on their activities by security forces.