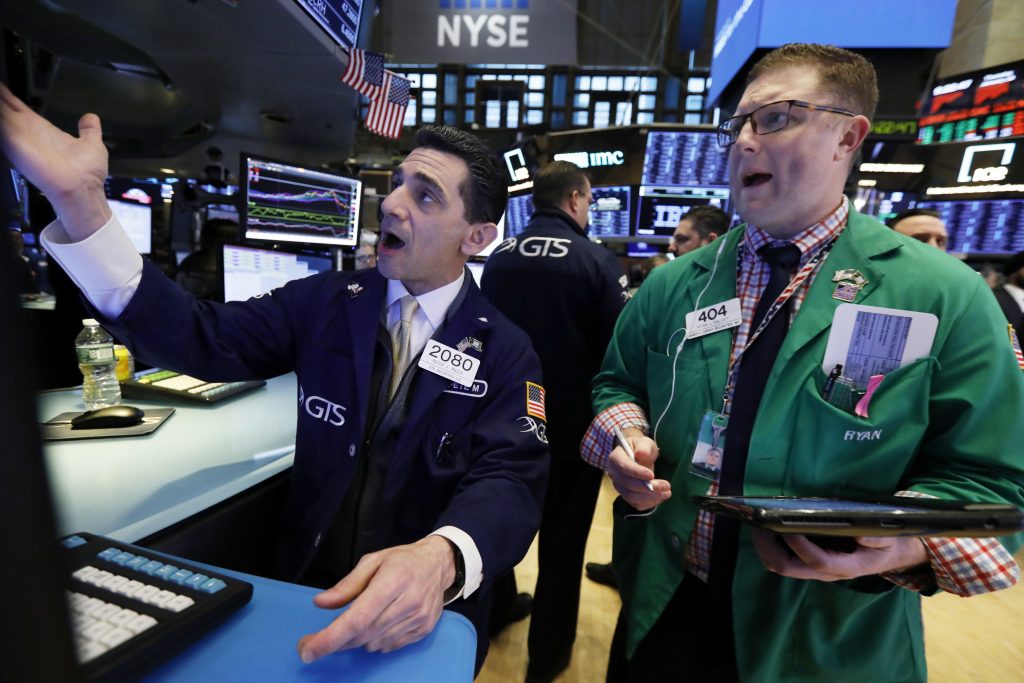 After a shaky start, U.S. stocks are mostly higher at midday Thursday as industrial companies, utilities and household goods makers rise. The S&P 500 is on track for its fifth consecutive gain.

U.S. and Chinese officials wrapped trade talks in Beijing without a significant breakthrough. Retailers sank after Macy’s said its sales over the year-end shopping season were worse than expected, and airlines slumped after American gave a disappointing revenue forecast.

BLACK EYE-DAY: Macy’s said year-end sales slowed in the middle of December and the department store cut its annual profit and sales forecasts. Its stock plunged 18.2 percent to $25.94 in heavy trading. Kohl’s sank 6.8 percent to $65.16 after it said sales grew at a slower pace than they did a year ago.

Macy’s announcement came as a surprise because investor expectations for the shopping season have been high. Unemployment is the lowest it’s been in decades, wages are rising and consumer confidence is high, while gas prices dropped late last year. In late December, stocks rallied after Mastercard SpendingPulse said shoppers spent $850 billion between Nov. 1 and Dec. 24, an increase of 5 percent from the same time a year earlier.

But the stock market fell sharply in October and then took a dramatic plunge over the first three weeks of December. Shortly afterward the federal government went into a partial shutdown that is still ongoing. All of that may have made shoppers less willing to spend.

THE QUOTE: “High-end consumers, even though they’re making decent money (and) the economy is going on relatively strong, it may have affected their willingness to splurge over the holidays,” said Ken Perkins, president of the research firm Retail Metrics. “It was not good timing at all.”

While retailers took steep losses Thursday, Perkins said the market turmoil is a much bigger problem for companies like Macy’s because most stocks are owned by relatively wealthy people. That means big box stores and companies that sell less expensive goods won’t be affected as much, as shown by Target’s stronger sales report. Perkins added that Amazon likely had a “stellar” year-end shopping season.

STUCK ON THE RUNWAY: Airlines skidded after American said its fourth-quarter revenue growth was at the low end of its projections. Delta gave a similarly disappointing forecast a week ago. American fell 6.8 percent to $31.16 while Delta slid 2.2 percent to $47.40 and United dropped 4.8 percent to $79.71.

U.S.-CHINA TALKS: Stock markets have jumped over the last two weeks as investors grew more hopeful that the U.S. and China will resolve the trade tensions that have been brewing over the past year. The just-concluded talks in Beijing helped the U.S. market rally for four days in a row, its longest streak since mid-September. But as those talks ended, it’s not clear what the next steps will be or when they will talk next.

The U.S. Trade Representative said topics at the meeting included China’s pledge to buy more energy and agricultural products and manufactured goods from the U.S. But that’s a relatively minor area of disagreement. The U.S. wants China to change its technology policy to reduce cybertheft of trade secrets as well as allow more access to the Chinese market for non-Chinese companies and increased protection for foreign patents and copyrights. The U.S. Trade Representative gave no hint of progress on those issues.

ENERGY: Oil prices dipped after hitting their highest levels in almost a month. U.S. crude fell 0.2 percent to $52.23 a barrel in New York and Brent crude slid 0.3 percent to $61.25 a barrel in London.