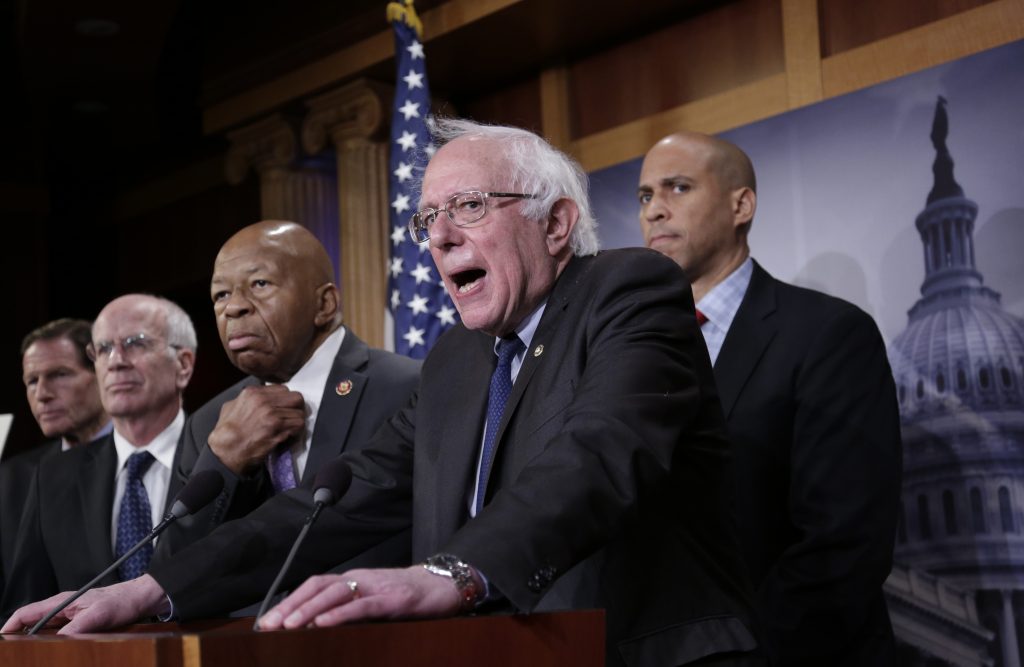 Challenging President Donald Trump to make good on his pledge to cut prescription drug prices, congressional liberals proposed legislation Thursday to bring U.S. prices in line with the much lower costs in other countries.

The Democratic bills stand little chance of becoming law in a divided government. But the effort could put Republicans on the defensive by echoing Trump’s pledge to force drugmakers to cut prices.

Democrats and Trump agree that people in the United States shouldn’t have to pay more for their medications than do those in other economically advanced countries.

The Trump administration has put forward its own plan for reducing drug prices, but industry analysts have seen little impact so far. The pharmaceutical industry said the Democratic bills would “wreak havoc on the U.S. healthcare system.”

The new legislation was offered by Sen. Bernie Sanders, (I-Vt.), Rep. Elijah Cummings, (D-Md.), and others. Cummings leads the House Oversight and Government Reform Committee, which is expected to take a major role on drug pricing.

The lawmakers want to:

There was no immediate response from the administration.

“Today I say to President Trump, if you are serious about lowering the cost of prescription drugs in this country, support our legislation and get your Republican colleagues on board,” Sanders said at a Capitol Hill press conference.

Holly Campbell, a spokeswoman for the Pharmaceutical Research and Manufacturers of America, said Sanders’ plan would harm U.S. patients. The industry argues that government price regulation could limit access to some medicines, undermine financial incentives for research, and compromise safety standards. Sanders says drugmakers are primarily interested in protecting profits.

But Medicare negotiation is a political nonstarter for most Republicans, who favor a free-market approach to the U.S. pharmaceutical industry and prize its capacity for innovation.

As president, Trump has come out with a plan to lower drug costs that relies on dozens of regulatory actions. The goal is to eliminate incentives for drugmakers, pharmacy benefit managers and insurers to stifle competition at the expense of consumers. Independent experts say the administration proposals would have an impact, but not limit the ability of drug companies to set high prices.

Time and again, Trump has complained that other countries where governments set drug prices are taking advantage of Americans. Indeed, one of his ideas would shift Medicare payments for drugs administered in doctors’ offices to a level based on international prices.

“We are taking aim at the global freeloading that forces American consumers to subsidize lower prices in foreign countries through higher prices in our country,” the president said when he made that proposal shortly before last year’s congressional elections.

The Democratic bills would go far beyond Trump’s approach.

The newest idea would essentially apply to any U.S. patent-protected brand-name drug, whether or not government programs are bearing the cost. By comparison, Trump’s international pricing proposal would not apply to retail pharmacy drugs purchased by Medicare beneficiaries or to medications for privately insured people. It’s the result of a joint effort between Sanders and Rep. Ro Khanna, (D-Calif).

Drugs found to be “excessively priced” by the government could face generic competition. A medication’s cost would be deemed “excessive” if its price in the U.S. was higher than the median, or midpoint, price in Canada, the United Kingdom, Germany, France and Japan.

If the manufacturer was unwilling to cut its U.S. price, then the government could allow generic companies to make a more affordable version of the medication. Generic drugmakers would have to pay “reasonable” royalties to the company holding the patent.