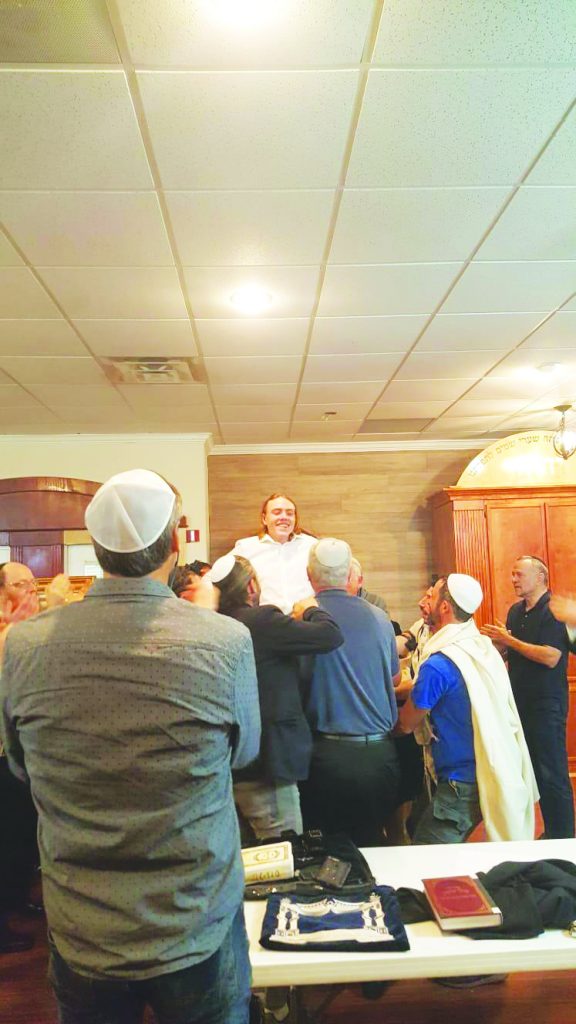 A very special siyum was held in Houston, at Congregation Torah VaChesed, as Joel Pennington, a 15-year-old deaf boy, who attends the Texas School for the Deaf, completed learning Pirkei Avos.

Joel’s story is quite a fascinating one. His introduction to Torah learning began about four and a half years ago, when his mother, Mrs. Orit Pennington, attended a pidyon haben for the son of some good friends, who had waited over 20 years to have a child.

The pidyon haben was held at Congregation Torah VaChesed in Houston, a vibrant congregation under the leadership of Rabbi Avraham Yaghobian. Before the pidyon haben, Rabbi Yaghobian reminded the attendees that this was an opportune moment for special requests, as the Gates of Heaven are open at this auspicious time.

Around that time, the Penningtons had been trying unsuccessfully to find a Jewish teacher for their son. Joel was attending the Texas School for the Deaf in Austin, and only coming home for the weekends, but they were anxious for him to receive some sort of Jewish education.

The Penningtons were trying to provide for him whatever they could, but they knew that it was insufficient. Of course, Mrs. Pennington prayed during the pidyon haben.

Later, during the meal that followed, Mrs. Pennington met a man, whom she told about her plight. He immediately replied, “I know a man in New York who may be able to help you. Can I send you his name?”

When she returned home, Mrs. Pennington found an email message with the name of Rabbi Eliezer Lederfiend, director of Our Way, a Jewish outreach program for the hearing-impaired.

Mrs. Pennington contacted Rabbi Lederfiend, who connected her with Rabbi David Kastor, a deaf Rabbi in Baltimore, who began learning with Joel over video phone, a special phone system which can be used for people who are deaf.

Joel and Rabbi Kastor began learning together every Sunday, and as Joel’s bar mitzvah approached, Rabbi Kastor prepared him for that special occasion.

When the time came, Rabbi Kastor flew to Houston to participate personally in the bar mitzvah, which was held in Torah VaChesed.

After the bar mitzvah, Joel wanted to continue learning with Rabbi Kastor, so they began studying Pirkei Avos. Joel always strove to understand each Mishnah in depth, and discussed it thoroughly with Rabbi Kastor, trying to apply it to his own life.

Finally, after two years, they completed the entire Pirkei Avos, and Rabbi Kastor insisted on celebrating with a siyum. Once again, Rabbi Kastor flew to Houston, to participate in person.

Rabbi Yaghobian addressed the gathering and asserted that we all have to make time for learning Torah and set aside specific times to do so. He explained that Joel is an inspiration to everyone. He has many challenges and is only home on the weekends, yet nevertheless, he gets up early on Sunday morning to make time to learn Torah.

Rabbi Kastor described the siyum celebration. “Joel spoke about what he learned from the sefer, explaining how he used the lessons to help him solve problems in his life. He felt good that he used the applications from the sefer for the real world.

“Then, the men danced and lifted Joel on the chair like a chassan. The atmosphere was so beautiful, and I really enjoyed that feeling of warmth and unity.”

Mrs. Pennington relates, “What was amazing to me was the number of people who were there for Shacharis at 8:00 in the morning. People came to us afterward and told us that they were brought to tears by Joel’s speech. We never know how we influence other people with our actions. Joel did not do this to impress anyone. He truly does not understand why he made a celebration, as he said, ‘Why are you making such a big deal? I need to study; we only have so many years on this world…’”

Rabbi Yaghobian remarked, “Yoel is truly a remarkable young man and an example to everyone else that no matter what, one can toil and attain a level of Torah learning despite hardships.

“Yoel prevailed despite all odds and he is truly an asset to Klal Yisrael and a tremendous nachas to Hashem.”