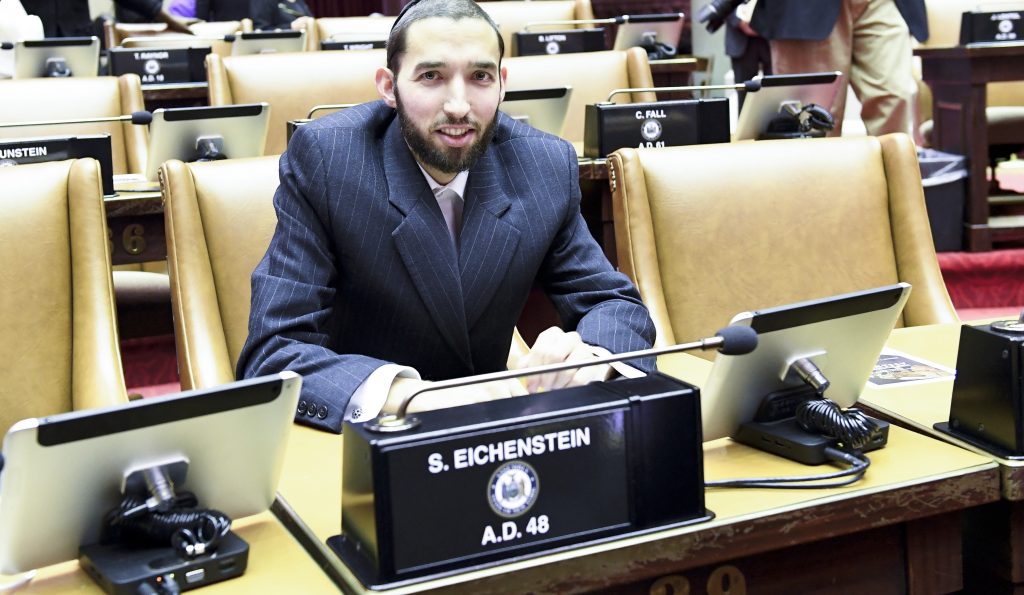 The New York state Legislature gaveled into its 2019 session Wednesday in historic fashion as Democrat Andrea Stewart-Cousins became the first woman to lead the state Senate.

Stewart-Cousins, of Yonkers, takes over the Senate as a record-high 70 women are serving in the 213-seat Legislature. The veteran lawmaker, first elected in 2006, was tapped to lead the Senate after Democrats wrested control of the chamber from Republicans in the November elections.

“We are going to tell the rest of the country that New York is about opportunities — not barriers, not walls, not divisions,” she told a packed Senate chamber before ticking off several legislative priorities for the year, such as early voting, new campaign finance limits, the elimination of cash bail and the new rules giving child abuse victims more time to file lawsuits or seek charges against their abusers.

Carl Heastie, a Bronx Democrat, was elected speaker of the Assembly for a third time. Like Stewart-Cousins, Heastie is black, making 2019 the first time in state history in which both chambers have been led by African-American legislators.

Following their victory in the Senate, Democrats now control both chambers and hold the governor’s office for the first time in a decade. One-party rule is expected to ease the way for liberal priorities that the Senate’s former Republican leaders had held back.

Other top issues for 2019 include the legalization of marijuana, and possible congestion tolls for Manhattan.

Republicans say they’ll look to push back on Democratic proposals that they think would hurt the economy or negatively impact upstate and rural areas, while acknowledging that their reduced numbers will make it difficult.

“We want to partner with Sen. Stewart-Cousins,” said Sen. Joe Griffo, a Rome Republican, “but we can and we will and we must speak out when things occur.”

Griffo is standing in as the GOP’s Senate minority leader in the absence of Sen. John Flanagan, of Long Island, who is seeking treatment for alcohol dependency.

Wednesday saw the session’s first kerfuffle as Republicans unsuccessfully pushed back on a Democratic plan to create a new ethics committee — led by Democrats — that would have the power to investigate allegations of misconduct by lawmakers. Republicans demanded even representation on the panel but were rebuffed.

The Democrats’ lock on power won’t guarantee success, however, on a long list of proposals they hope to advance. First they’ll have to reach agreement on the details with each other and with Gov. Andrew Cuomo.

On marijuana, lawmakers will have to decide how many retail shops should be allowed, how they should be licensed and regulated and the appropriate tax rate for the product.

On congestion tolls, they’ll need to figure out which vehicles to toll, whether discounts should be given to local businesses or low-income commuters, and how to best use the revenue to support upgrades to New York City’s aging subways.

The GOP had controlled the Senate for the past decade thanks to a faction of renegade Democrats who worked with the GOP conference. The November elections put Democrats back in power, giving them 40 seats compared to 23 for Republicans. In the Assembly, Democrats hold 107 of 150 seats.

The six-month session includes 61 scheduled days of legislative activity. Cuomo is expected to deliver his State of the State address and his state budget proposal before the end of the month. The state budget is due by April 1.