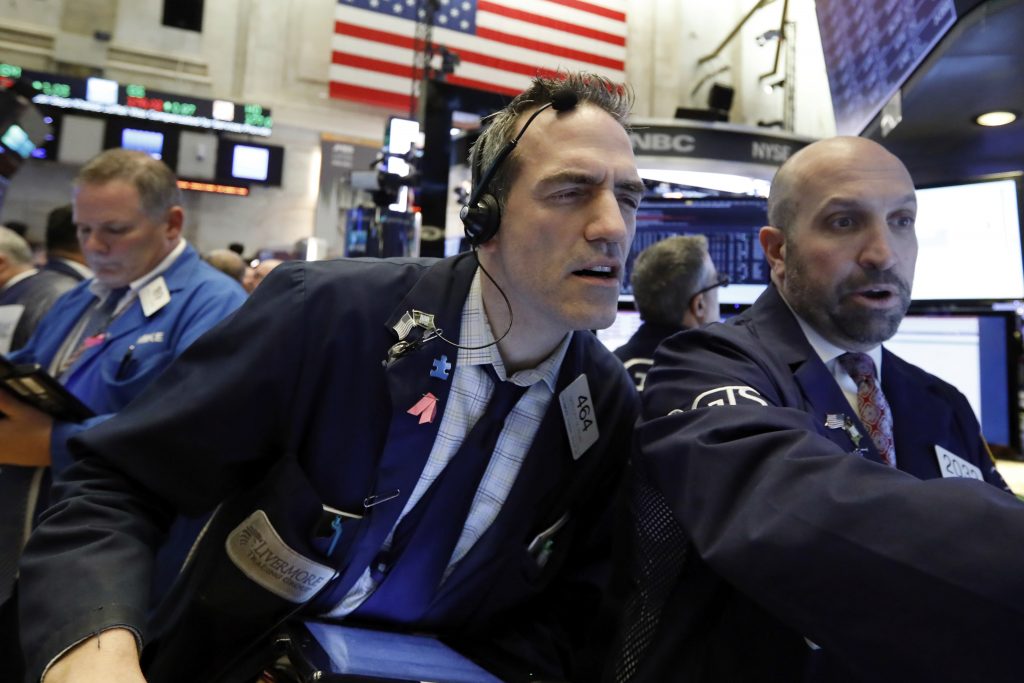 The latest round of trade talks between the U.S. and China ended without word of progress, but with no signs of setbacks either.

Railroad operator Union Pacific made the largest gain in the S&P 500 index after it named an industry veteran to a top executive position. AutoNation fell after predicting a weak year for auto sales.

Trading has been extremely volatile for the last few months, but if Tuesday’s early gain endures, it will be the third in a row for the S&P 500. The index hasn’t had a three-day winning streak since late November.

TRADE TALKS: There was no evidence Tuesday morning that the U.S. and China made significant progress in their latest round of trade talks, and experts say it will take months for them to resolve the causes of the trade war, which include disagreements over Beijing’s handling of technology and intellectual property. But after the market’s plunges in October and December, investors have become notably more optimistic about an eventual deal. An agreement between the two biggest economic powers in the world could remove a major obstacle to global economic growth.

THE QUOTE: Kate Warne, an investment strategist for Edward Jones, said the market’s large moves reflect investors’ questions about major issues including economic growth, the threats of recession and trade tensions, and rising interest rates. She said it’s normal for stocks to change course as traders grapple with those issues on a day-to-day basis.

“You have new information that’s driving stock prices both higher and lower, and that’s pretty typical when there’s uncertainty and there’s a lot of new information coming into the market,” she said.

Warne added that trading on Wall Street is typically light during the holidays, and that can exaggerate market moves up or down.

ALL THE LIVE-LONG DAY: Union Pacific surged 8.6 percent to $150.53 after it hired longtime Canadian National railroad executive Jim Vena as its chief operating officer. Vena will oversee the company’s effort to implement a new scheduling program based on what other railroads including Canadian National have been doing for years.

ENERGY: Like stocks, oil prices continued their recent rally. U.S. crude was on track to rise for the eighth day in the last nine as it jumped 2.7 percent to $49.83 per barrel in New York. Brent crude, used to price international oils, was up 1.7 percent to $58.33 a barrel in London.

U.S. crude dropped from about $76 a barrel in early October to a low of $42 a barrel on Dec. 24 as investors worried about slowing economic growth and a supply glut. The modest recovery in oil prices has sent energy companies higher, and the S&P 500 index of energy companies has risen 7 percent so far in 2019.

CRACKED SCREEN: South Korean smartphone and computer chip maker Samsung said demand for chips is weak because the global economy is slowing. The company expects its fourth-quarter sales to drop 11 percent compared to a year ago and said its operating profit will fall as well. Samsung also said its phones are facing stiffer competition, and its stock fell 1.7 percent in Seoul.

Tech stocks were roiled on Thursday after Apple said iPhone sales in China were falling.

CHECK ENGINE: Car retailer AutoNation said 2019 will be a challenging year for sales, and its stock lost 2.9 percent to $36.55. The company also said it is restructuring its business, and several top executives including its chief operating officer are departing. Used car dealership CarMax gave up 3.5 percent to $64.09 while auto parts retailer AutoZone dropped 2.7 percent to $80.22.

POWER DOWN: California utility PG&E slumped another 8 percent to $17.43 after S&P Global Ratings slashed the company’s credit rating to non-investment grade or “junk” status. The stock had plunged 22 percent Monday on reports PG&E was considering filing for bankruptcy, as it faces huge potential legal liabilities related to deadly wildfires in 2017 and 2018.