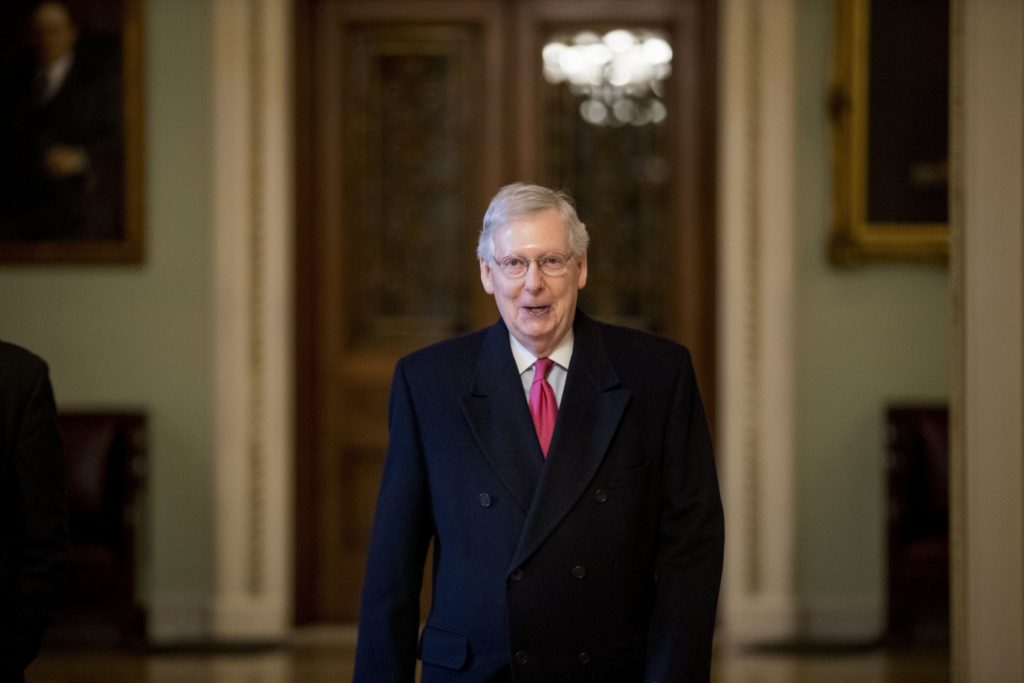 Senate Republicans’ first bill of the new Congress aims to insert the legislative branch into President Donald Trump’s Middle East policy — but also tries to drive a wedge between centrist and liberal Democrats over attitudes toward Israel.

The bipartisan package backed by Senate Majority Leader Mitch McConnell, R-Ky., had initially drawn widespread support ahead of Tuesday’s vote. It includes measures supporting Israel and Jordan and slapping sanctions on Syrians involved in war crimes. But Democrats are split over the addition of Republican Sen. Marco Rubio’s “Combatting BDS Act,” which seeks to counter the global Boycott, Divest and Sanctions (BDS) movement against Israel over its treatment of Palestinians and the Jewish communities in Yehudah and Shomron.

For now, the package will almost certainly stall. The bill comes amid the partial government shutdown, and Democrats say they will block it until government is reopened.

Senate Minority Leader Chuck Schumer will oppose proceeding to the legislation, according to a senior aide who was unauthorized to speak publicly about the vote and spoke on condition of anonymity. Other Democratic senators who also support the bills will likely follow suit.

Sen. Ben Cardin, D-Md., tweeted that the Senate “should not take up any bills unrelated to reopening the government” until the shutdown is resolved.

But Republicans see an opening to focus on newly elected House Democrats, including the country’s first Palestinian American woman in Congress, Michigan Rep. Rashida Tlaib, who has spoken about the rights of Americans to support the BDS issue.

“This is the U.S. where boycotting is a right & part of our historical fight for freedom & equality,” Tlaib said in a weekend tweet. “Maybe a refresher on our U.S. Constitution is in order, then get back to opening up our government instead of taking our rights away.”

Israel sees a growing threat from the BDS movement, which has led to increased boycotts of Israel in support of the Palestinians. Some companies stopped offering services in Yehudah and Shomron communities. That has led to a “boycott of the boycotts” as Israel pushes back against those aligned with BDS.

In support of Israel, Rubio’s bills would affirm the legal authority of state and local governments to restrict contracts and take other actions against those “engaged in BDS conduct.” Several states are facing lawsuits after taking action against workers supporting BDS boycotts of Israel.

Both sides are squaring off ahead of Tuesday’s votes.

Republicans hold a slim majority in the Senate and would need Democratic votes to advance the measure over the 60-vote threshold.