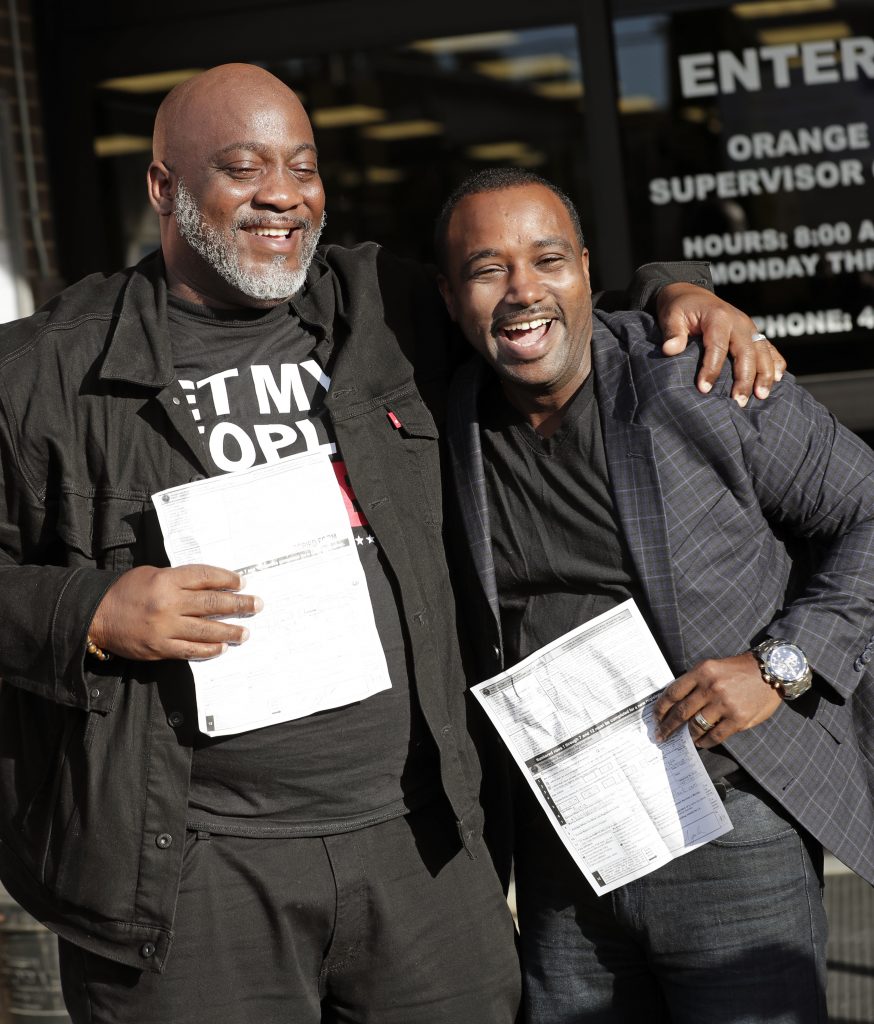 Confetti,and party horns marked voter registration in county elections offices across Florida on Tuesday as ex-felons long denied the right to vote began applying to have that right restored.

It was an emotional day for many of the returned citizens, as they call themselves: People who have completed all requirements of their sentences and so are now eligible to vote because of an amendment to the state constitution that passed in November. Many brought spouses, children, friends and co-workers to witness their moment.

“I feel validated, I feel like it’s redemption. I know I now have a voice,” said Desmond Meade, president of the Florida Rights Restoration Coalition. “It’s something I’ve wanted for so long. It’s almost overwhelming, the feeling.”

He fought back tears, then gave up and let them roll.

“Don’t start me crying,” responded his wife, Sheena, as she and their 15-year-old daughter helped with his application at the Orange County Supervisor of Elections office. Their 17-year-old son shared the experience with his dad by also registering to vote.

Meade was showered with multicolored confetti as he walked out, voter registration held high.

“In the civil rights era, fathers would take their sons with them to register,” said Meade, 47, who was convicted of drug and firearms charges. “I’ve never been able to do that until today.”

Across the state, scores of individuals whose pasts had kept them from voting showed up at their local elections offices. The amendment overturned an 1868 requirement that blocked automatic restoration of voting rights after a felony sentence was served – a hurdle that now remains in just three states. In Florida, only people with a record of specific serious offenses still must seek special permission from the state clemency board.

It’s unclear how many former felons will sign up in coming weeks and months, if they will follow through and vote, and which party they will favor. Marc Meredith of the University of Pennsylvania, who studies the voting habits of ex-felons, says there is little indication that this sweeping enfranchisement will significantly change Florida politics. Historically, few of these men and women turn out at the polls.

“They vote at substantially lower rates than the typical voter. So the political impact is muted,” he said.