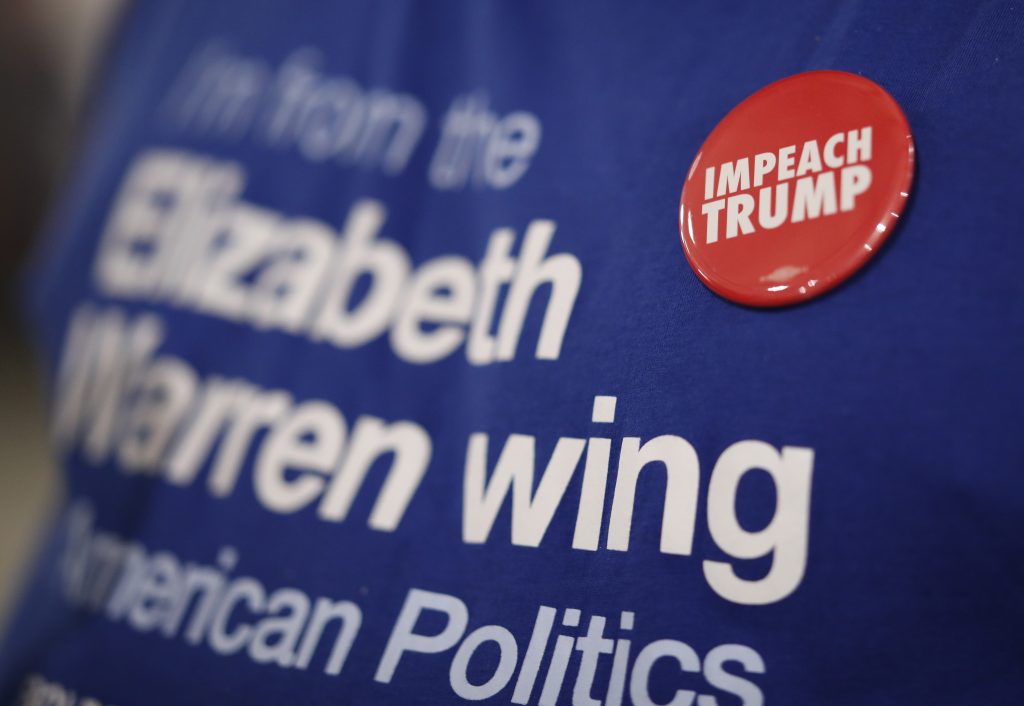 Sen. Elizabeth Warren’s first trip to Iowa as a likely presidential candidate highlighted her fiery anti-Wall Street populism and could set the tone for the sprawling field of Democrats expected to jockey for the right to challenge President Donald Trump in 2020.

In a weekend swing that saw overflow crowds at every stop, the Massachusetts liberal harshly critiqued a Washington political culture she called “corrupt” and “beholden to giant corporations.”

Warren’s critiques of Wall Street’s political influence struck a chord with many of the Iowans who came to see her, 13 months ahead of the Iowa caucuses that formally kick off the nomination race.

“Trump says Make America Great Again, but he’s making corporations great — he doesn’t give a … about us, and his flunkies don’t care either,” said Dana Evans, 69, of Aurelia, Iowa, president of Vietnam Veterans of Northwest Iowa.

More than two dozen Democrats are believed to be seriously contemplating bids for the party’s 2020 nomination, although none — with the possible exception of former Vice President Joe Biden — are obvious front-runners. Biden is nearing a decision on whether to run, the New York Times reported on Sunday.

Cory Booker of New Jersey and Kamala Harris of California are some of Warren’s Senate colleagues likely to join her soon as either preliminary or full-on candidates. Both made trips to Iowa to help Democrats ahead of November’s election, where the party won three of the state’s four Congressional seats.

Pledging to forsake corporate contributions if she runs for president, Warren challenged her Democratic competitors to do likewise. She also repeatedly criticized the idea that wealthy presidential hopefuls might use their personal fortunes to fund campaigns, a notion she said Democrats should find offensive.

“Campaigns should not be for sale,” she said at a stop in western Iowa. “As Democrats in a Democratic primary, we ought to be building grassroots support. We ought to be building a movement [and] not having billionaires buy these campaigns, whether we’re talking about super PACs or self-funders.”

Although Warren didn’t mention them by name, billionaires Tom Steyer and Michael Bloomberg have indicated they’re considering joining the Democratic fray and have the resources to finance their own campaigns if they wanted to do so.

Bloomberg, a former New York City mayor who’s the founder and majority owner of Bloomberg LP, the parent company of Bloomberg News, made a trip to Iowa in early December to showcase the climate change issue. During a Dec. 30 appearance on NBC’s “Meet the Press,” Bloomberg said he expects to make a decision about a presidential run in the next month or so.

While much of Wall Street despises her, Warren’s advocacy has endeared her to a progressive base whose voters are hungry for a more liberal Democratic Party.

While most voters who attended her rallies say they remain undecided about which Democrat they’ll support, others sounded ready to commit. “She made me proud to be a Democrat,” said Lorene Bliss, 74, a retired scientist from Council Bluffs. “I could follow a lady like that. I’m an Indian, not a chief. She could wind up being the one for me.”

Warren has long been a favorite target of President Trump, who frequently calls her “Pocahontas” in reference to her claims of Native American ancestry. But even some Democrats have mocked her handling of the release in October of a DNA test meant to bolster her claims that showed she likely has distant Native American heritage from six to 10 generations ago.

Some of the weekend stops took Warren to conservative parts of the state, as she sought to prove her comfort outside urban America and show stamina for what promises to be a long slog. By Saturday evening, she was losing her voice.

“The bad news is I’ve got a cold,” she said. “The good news is, nevertheless, I persist.”