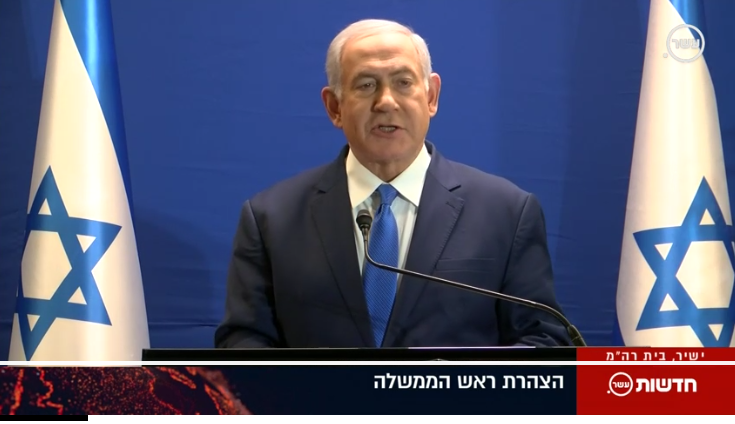 In a nationwide broadcast pre-empting the beginning of the prime-time news, Israeli Prime Minister Binyamin Netanyahu demanded that he be given the opportunity to personally confront the state’s state’s witnesses who have testified against him in three corruption cases.

“Today I reveal to you that during my investigations, I demanded a face to face confrontation with states witnesses. I was refused. I asked again. I was refused again,” he said.

“What are they afraid of?” he asked.

“Today I repeat that demand, and as far as I am concerned it should be on live TV.”

The prime minister derided the most serious of the charges against him, that of bribery. “What was the bribery? Did money change hands? Was money deposited in bank accounts?”

No, he said. They accuse him of receiving favorable media coverage in return for favors. “How absurd!” he exclaimed. “I, who have been attacked in the media without stop” during this entire period.

Netanyahu accused the Israeli left of attempting to bring him down through the investigations since they could not defeat him at the ballot box, saying that he “won’t make the concessions” the left wants from him.

“There is nonstop pressure on the Attorney-General to indict me,” Netanyahu said. “Maybe if I proposed a new disengagement or divided Yerushalayim or abandoned our security they would leave me alone, but I will never do that.”

“If you’re going to say there’s a bribe, why don’t you do a complete job?” the prime minister asked. “Lapid met with [Yediot Aharonot publisher] Noni Mozes dozens of times and deleted all documentation of the meetings, and supported Noni’s law to close Israel Hayom and got positive media coverage.”

Netanyahu has been accused of trying to make a similar deal with Mozes for favorable coverage.

Netanyahu alleged that besides being denied the right to confront his accusers, police have failed to summon other possible witnesses who could have testified in his favor.

The person he described as potentially the single most important figure in one of the cases, head of the anti-trust authority, David Eilat, who backed a regulatory decision considered suspicions by police, was not questioned. Netanyahu stated that he had almost nothing to do with the decision himself.

“I know the truth, I am confident in the truth,” he said, saying he was only asking to be treated fairly and given a hearing.

Responding to Netanyahu’s central demand, for a confrontation with state witnesses, senior police officials explained on Monday night, that it would not have made any difference.

“A confrontation would not have facilitated the investigation. We are talking about events that took place over years,” Ynet quotes police officials as saying.

“We have enough evidence and documents to strengthen the evidence in the case. We are not talking about a specific incident at a given time, in a given place, or something similar to someone’s word versus somebody else’s word. A confrontation would not have changed the general picture in this case,” they asserted.

“The prime minister is no longer fit to fulfill his position,” she contended. “We saw a cynical and pathetic elections speech of someone who is trying with all his might to escape the law.”

“It is my intention to appeal to the Central Elections Committee to prevent a recurrence of this performance,” she said. “It is a gross and blatant intervention of Netanyahu in his legal process, creating fake drama full of nothing, and taking over the screen time as the last of the dictators.”

The Justice Ministry responded to Netanyahu’s speech as well: “All the investigation activities carried out in the investigation files relating to the prime minister have been done professionally and thoroughly, accompanied by the Tel Aviv District Attorney (taxation and economics) and under the supervision of the State Attorney and the Attorney General, all according to professional considerations.”

“It is inappropriate for the law enforcement authorities to relate to the investigative actions and the testimonies in the media, certainly at this stage,” a spokesman said.

Meretz leader Tamar Zandberg objected to the notion of free air time for a legal defense speech in the first place:

She mocked what had been billed as a ‘dramatic announcement’—you can really say, ‘there’s nothing because nothing happened,’” using the premier’s longtime protestation of innocence regarding his corruption probes.

“The only dramatic thing here is a prime minister who continues to serve with a [police] recommendation of three bribery trials,” Zandberg said in a statement. “Until Netanyahu resigns, this is election propaganda that shouldn’t be broadcast.”