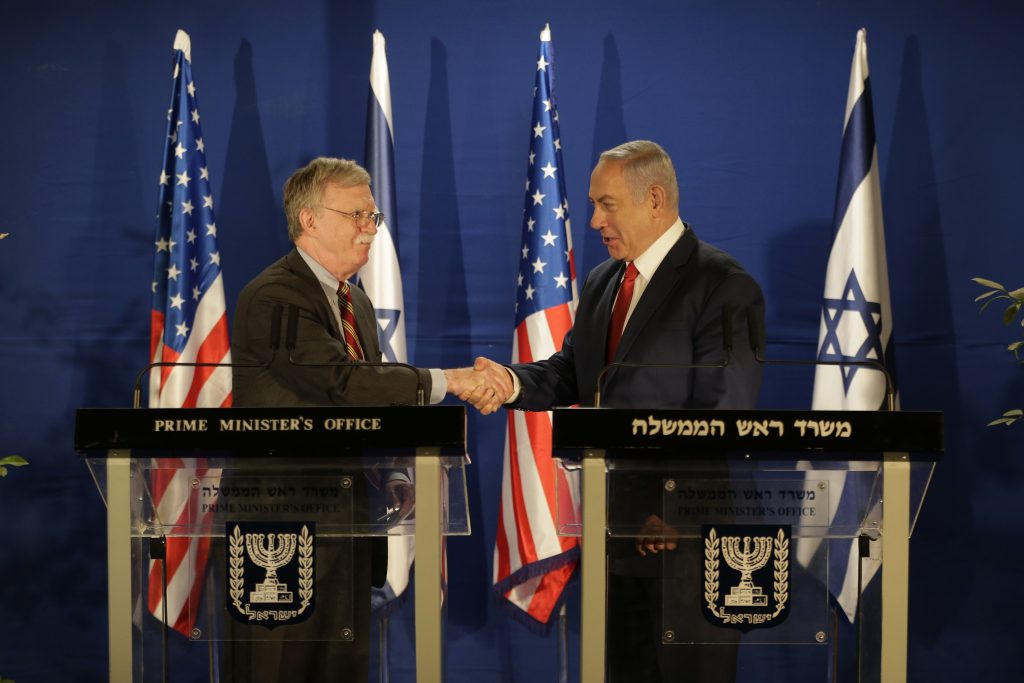 The U.S. pullout from Syria was not the only topic on the agenda of the meeting between Israeli Prime Minister Binyamin Netanyahu and President Donald Trump’s National Security Advisor John Bolton; Israeli sovereignty over the Golan Heights took center stage on Sunday night.

“The Golan Heights is tremendously important for our security,” Netanyahu told Bolton during a joint statement after their meeting at the Prime Minister’s residence in Yerushalayim.

Netanyahu is to take Bolton on a tour of the Golan Heights Monday (it was stormy on Sunday), to better understand the Israeli perspective.

“When you’re there, you’ll be able to understand perfectly why we’ll never leave the Golan Heights and why it’s important that all countries recognize Israel’s sovereignty over the Golan Heights,” he said. “I’ve discussed this with the president, and I hope I have a chance to show it to you directly tomorrow on our visit.”

Netanyahu has been asking the White House in recent days to recognize Israeli sovereignty over the area as a form of compensation for the Syria withdrawal, Channel 10 reported on Sunday.

It further said that Netanyahu sent a letter to the White House requesting the recognition, and that he raised the subject with Secretary of State Mike Pompeo last week in Brazil, and again on Sunday with Bolton.

Otherwise, the press conference contained the usual declarations of bilateral harmony, albeit more in need than usual in light of Trump’s abrupt decision to pull out of Syria. Netanyahu has reportedly been urging the president to agree to a gradual withdrawal, so as not to jeopardize Israeli security. Bolton was in Yerushalayim to reassure the Israelis that the administration was standing by them.

“You have backed, both in word and deed, Israel’s right to defend itself, which we exercise constantly,” the prime minister said. “It’s important to know that we have the backing of our great friend and ally, the United States of America.”

Bolton, speaking after Netanyahu, reassured Israel of Washington’s abiding support for Israel’s security, seeking to allay fears of increasing Iranian aggression after U.S. troops are pulled out of Syria.

For the U.S., a sovereign nation’s ability to defend itself is the “ultimate mark of sovereignty,” Bolton said, and Trump’s commitment to Israel’s right to self-defense has not diminished.

“He says it proudly and unequivocally,” Bolton declared. “And I would just say to any nation, whether in this region or not in this region, that has any doubt about America’s support for Israel’s right to self-defense, they better think about it again.”

Another item on their agenda was the Chinese takeover of Haifa port. Bolton was to raise the subject with Netanyahu, according to Bloomberg, quoting an unnamed U.S. official.

Shanghai International Port Group (SIPG) won the 2014 bidding to build and operate for 25 years the new port in Haifa. The project is scheduled for completion in 2021. Israel has been seeking in recent weeks to allay Pentagon fears that the Chinese will use their port control to spy on the U.S. Navy, whose ships often dock in Haifa.

If Israel cannot satisfy the U.S. that the Haifa will continue to be a secure location, the Navy may have to cease using it, according to reports.

In the meantime, there has been no change in policy.