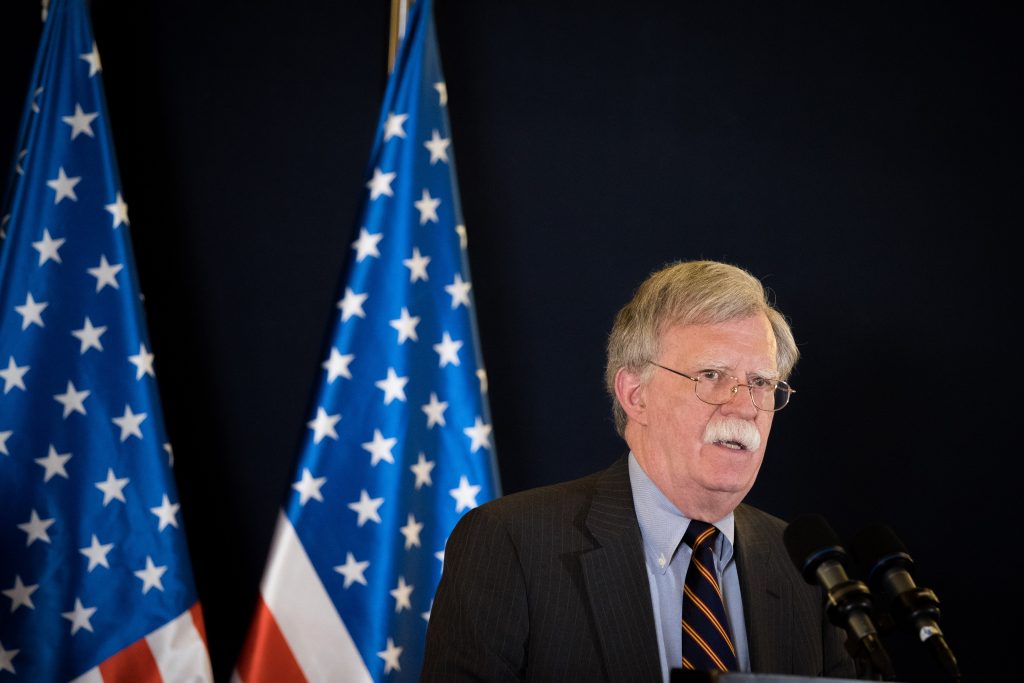 The pullout announced in December was initially expected to be completed within weeks, but the timetable has slowed as the president acceded to requests from aides, allies and members of Congress for a more orderly drawdown.

Bolton planned to meet with Prime Minister Binyamin Netanyahu and other officials on Sunday before traveling to Turkey. Israeli officials have expressed alarm that a swift withdrawal of the roughly 2,000 troops could enable Iran to expand its influence and presence in Syria, wracked by a years-long civil war and the Islamic State terrorism.

Trump’s move has raised fears about clearing the way for a Turkish assault on Kurdish fighters in Syria who have fought alongside American troops against IS terrorists. Turkey considers the Kurdish People’s Protection Units, or YPG, a terrorist group linked to an insurgency within its own borders.

A Trump administration official told reporters traveling with Bolton that Bolton intended to discuss the pace of the drawdown, as well as American troop levels in the region. Bolton was expected to explain that some U.S. troops based in Syria to fight IS will shift to Iraq with the same mission and that some American forces may remain at a key military outpost in al-Tanf, in southern Syria, to counter growing Iranian activity in the region.

Bolton also was to convey the message that the United States will be “very supportive” of Israeli strikes against Iranian targets in Syria, according to the official, who was not authorized to publicly discuss Bolton’s plans before the meetings and spoke on condition of anonymity to preview the talks.

Bolton warned Syria’s president, Bashar al-Assad, not to use the U.S. drawdown as a pretext to use chemical weapons against Syrians, saying there is “no change” to the U.S. position that their use is a “red line.” Trump has twice carried out airstrikes in Syria in response to apparent chemical attacks, with the intention of deterring Assad.

“We’ve tried twice through the use of military force to demonstrate to the Assad regime the use of chemical weapons is not acceptable,” Bolton said while en route to Israel. “And if they don’t heed the lessons of those two strikes, the next one will be more telling.”

Trump’s announcement about the intended troop withdrawal was greeted by surprise and condemnation from many U.S. lawmakers and allies, and prompted the resignation of Defense Secretary Jim Mattis and the U.S. special envoy for the anti-IS coalition in protest.

Secretary of State Mike Pompeo is following Bolton to the Mideast this coming week for an eight-country tour of Arab allies to shore up support for the administration’s partners in the region.

While in Israel, Bolton planned to encourage officials to take a tougher stance against Chinese electronics manufacturers ZTE and Huawei. The U.S. has expressed concerns about potential cyber-penetration by those companies.

Joining Bolton in Turkey will be the chairman of the Joint Chiefs of Staff, Gen. Joseph Dunford. In meetings with Turkey’s president, Recep Tayyip Erdogan, and other officials, they are expected to warn against an offensive targeting the Kurdish fighters in Syria.