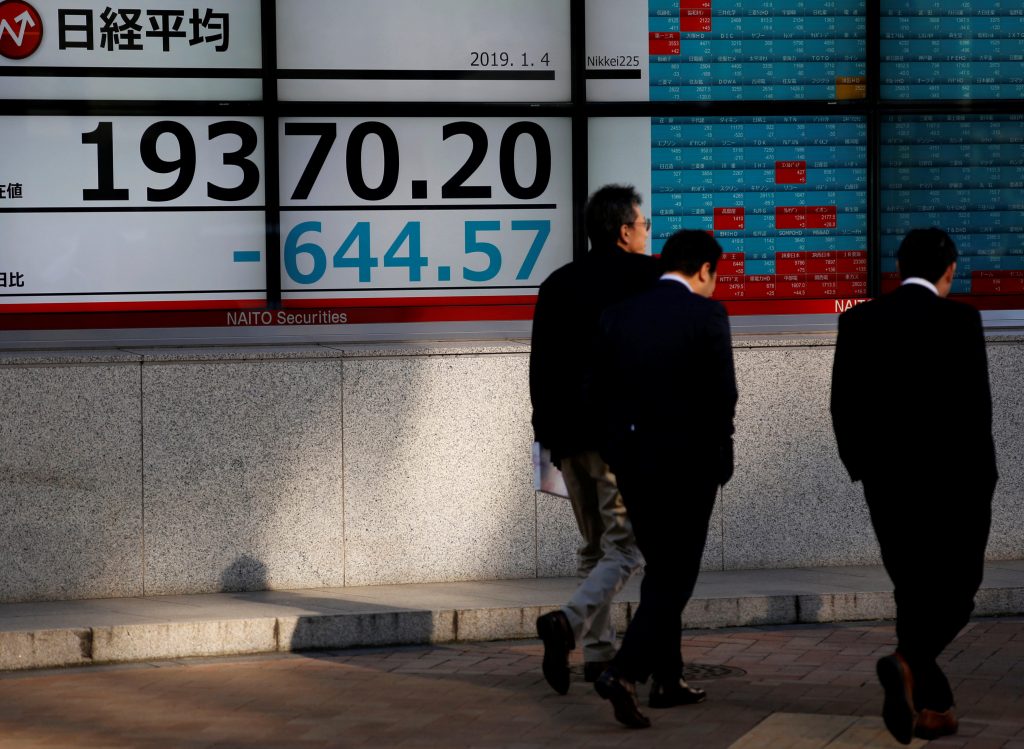 Asian shares found a crumb of comfort on Friday as Beijing announced a new round of trade talks with Washington, though recession fears still had markets betting the next move in U.S. interest rates might be down.

Despite past disappointments, investors cheered news that the U.S. and China would hold vice-ministerial level talks next week on their year-long trade dispute.

The overall mood was still fragile as Japan’s Nikkei skidded 2.75 percent on its first trading day of the year, weighted by growth worries and the strength of the yen.

MSCI’s index of Asia-Pacific shares outside Japan edged up 0.4 percent, but was still down 1.8 percent at the end of another rough week.

Fears that the Sino-U.S. trade war would sap world growth roiled risk-sensitive assets in 2018, driving a surge in volatility and sending major stock markets deep into the red.

Analysts now expect the two economic giants to find some common ground in their dispute, with impetus possibly coming from weak stock markets on both sides.

However, there are fewer than two months left in a short negotiating window and recent data suggests the standoff is taking an ever-greater economic toll.

A survey from the Institute for Supply Management (ISM) on Thursday showed U.S. factory activity hit the brakes in December as new orders slowed sharply.

The dismal report came after Chinese data on Monday showed its manufacturing activity contracted in December for the first time in more than two years.

“This is more proof, if needed, that U.S. President [Donald] Trump’s trade actions against China are now hurting the U.S. as much as they are China, rather than being, as Trump would have us believe, a zero-sum game where the U.S. takes the spoils at all others’ expense,” said Ray Attrill, head of forex strategy at National Australia Bank.

There is “more reason to think a Sino-U.S. trade deal is in the offing in coming weeks.”

Concerns about a U.S. recession had battered Wall Street overnight. The Dow shed 2.8 percent, while the S&P 500 lost 2.5 percent and the Nasdaq 3 percent.

The risk of a U.S. economic downturn, or even a recession, has caused a tectonic shift in expectations for interest rates with investors now pricing in the possibility of a cut.

While the Fed is still projecting two more hikes this year, the futures market implies that the next move will be down, with around a 40-percent probability of a move by year end.

The mounting speculation sent yields on two-year U.S. Treasuries as low as 2.37 percent, taking them under the effective federal funds rate for the first time since 2008. They were last trading at 2.42 percent.

Three- and five-year yields were even lower, an inversion that has sometimes heralded recessions in the past.

Yields on 10-year benchmark paper dropped to 2.55 percent overnight, a staggering turnaround from the highs of 3.25 percent seen as recently as November.

The decline has been a drag on the dollar, especially against the low-yielding yen. The greenback plumbed a more than nine-month low of 105.25 against the yen on Thursday, driven partly by technical factors.