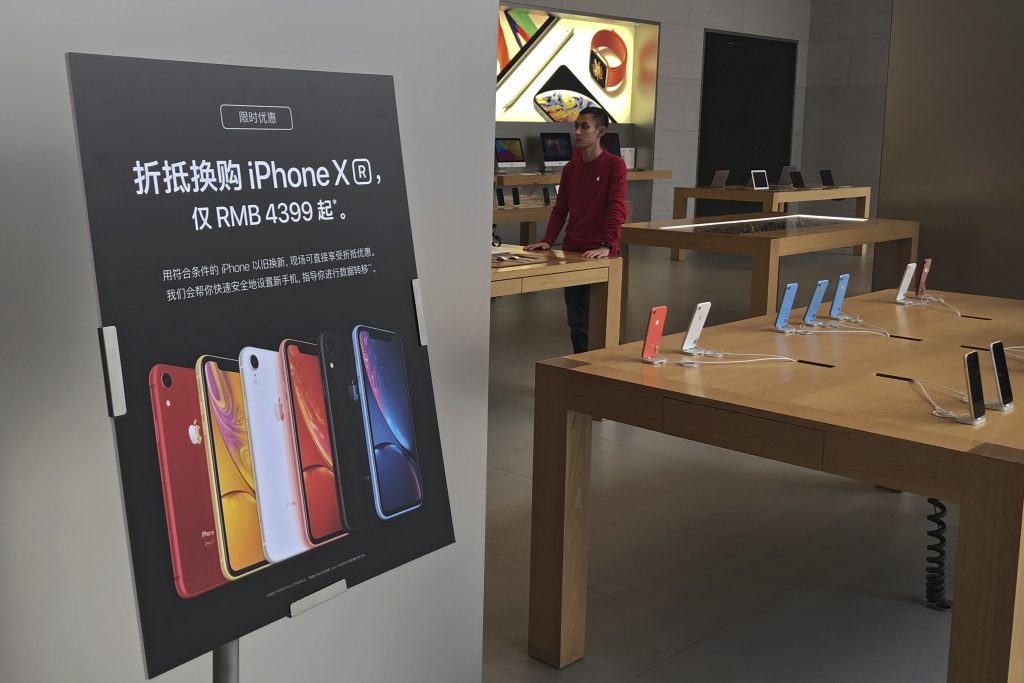 Apple Inc.’s $1,000 iPhone is a tough sell to consumers in China unnerved by an economic slump and the trade war with the U.S.

CEO Tim Cook said in a letter to shareholders Wednesday that demand for iPhones is waning and revenue for the last quarter of 2018 will fall well below projections, a decrease he traced mainly to China.

The iPhone is Apple’s biggest product, accounting for about 60 percent of its revenue in the July-September quarter, the latest reported. Its stock fell 9 percent in early trading Thursday.

Apple is the latest company grappling with increasing Chinese consumer anxiety. Other brand names such as Ford Motor Co. and jeweler Tiffany & Co. already have reported abrupt declines in sales to Chinese buyers.

China still is one of the fastest-growing economies, with 2018’s expansion forecast at about 6.5 percent. But China’s tariff fight with the U.S. and an avalanche of bad news about tumbling auto and real estate sales are undermining consumer confidence after two decades of almost unbroken rapid growth.

Emily Li, a 37-year-old advertising designer in Beijing, said she is putting off replacing her car or making other major purchases. “People are worried about losing jobs,” she said.

Weakness in Chinese demand is especially painful for Apple and other smartphone makers. China accounts for one-third of the industry’s global handset shipments.

Shipments in China fell 10 percent from a year earlier to 103 million handsets in the quarter ending in September, according to research firm IDC. It expects last year’s total Chinese purchases to shrink by 8 percent to 9 percent compared with 2016.

The belt-tightening in the world’s second-largest economy is bedeviling global industries, including autos and designer clothing, that count on China to drive sales growth.

The trade war with Washington has shaken a “sense of China’s invincibility,” said Mark Natkin, managing director of Marbridge Consulting, a research firm in Beijing. Chinese are waking up to the fact that their economy is vulnerable to the uncertainties of the global economy, he said.

The slump is a setback for the ruling Communist Party’s efforts to nurture self-sustaining, consumer-driven economic growth and wean China from its reliance on exports and investment.

China’s third-quarter economic growth of 6.5 percent was stronger than most other major economies, but the country’s lowest since the 2008 global crisis. The deceleration partly reflects a deliberate government campaign to rein in China’s high debt levels. At the same time, Beijing has sought to relieve the economic pain with higher government spending.

“They’re trying to aim at a very fine target,” said Dollar, a former World Bank and U.S. Treasury Department official. “They want to see the economy slow down, but they don’t want to see it slow down too much.”

China reported this week that factory activity shrank in December for the first time in more than two years. And auto sales in the biggest global market are on track for their first annual decline in three decades after plunging 16 percent in November. Soft real estate sales have forced developers to cut prices.

Overall, export growth decelerated to 5.4 percent over a year earlier, less than half October’s 12.6 percent rate.

Sales to the U.S. market have held up despite President Donald Trump’s punitive tariffs on $250 billion of Chinese goods, rising 12.9 percent in November over a year earlier. But that was thanks partly to exporters rushing to beat further American duty increases — a trend that is starting to fade.

In smartphones, that includes Huawei, Oppo, Vivo and Xiaomi. Some are priced as low as 500 yuan ($70). Others have beaten the American giant to market with features Chinese users want, such as phones that can use separate carriers for voice and data.

That has eroded the iPhone’s cachet and customers’ willingness to pay premium prices.

Apple’s third-quarter shipments in China fell 13 percent from a year earlier to 7.5 million units, according to IDC. Its market share of 7.5 percent put it in fifth place at less than one-third Huawei’s 24.6 percent share.

In his letter to Apple shareholders, Cook gave no China sales figures for the final quarter of the year but said traffic to retailers declined as “mounting uncertainty” fueled by the trade fight weighed on demand.

Worldwide, Apple fell behind Huawei to become the No. 3 brand by number of handsets sold in the third quarter, according to IDC. South Korea’s Samsung Electronics was in first place.

Yuan Yuan, a 26-year-old employee of a social media company in Beijing, reflects the pressures on urban professionals squeezed by rising living costs and job uncertainty.

As a university student, Yuan had an iPhone paid for by his parents. But once he had to buy his own, he switched to a lower-priced Xiaomi.

“I have no plans to buy an apartment, a car or any other major items,” Yuan said.