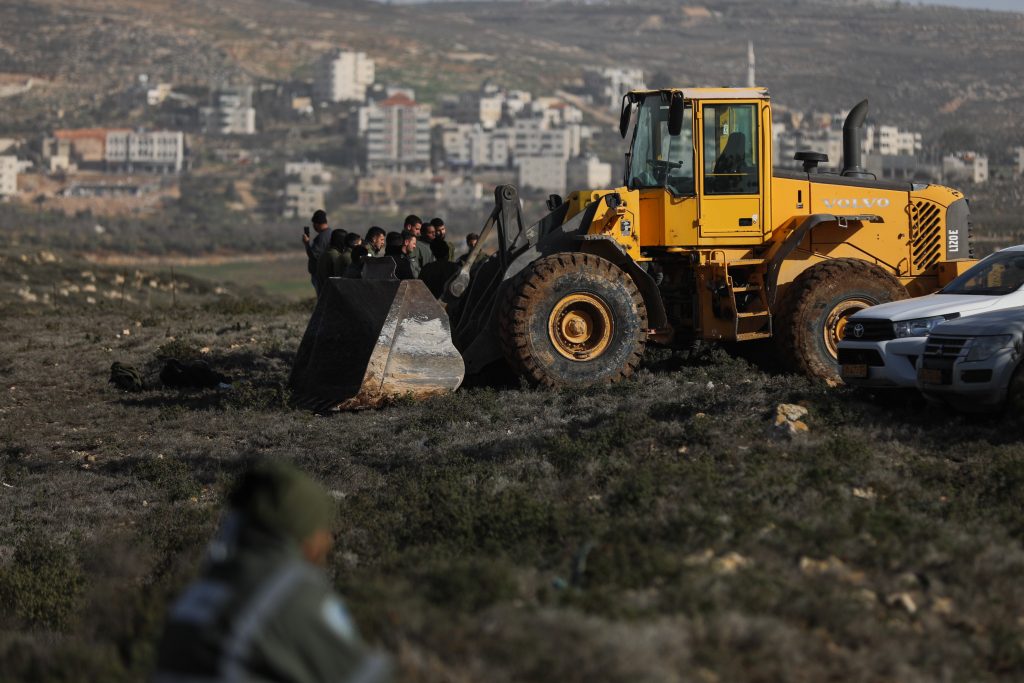 Right-wing MKs and officials expressed outrage Thursday at what they called the violent removal of protesters from the site of the Amona outpost, as Border Guards forcibly evacuated two families and hundreds of youths who had gathered at the site. Seven protesters were arrested. Officials said that 23 Border Guard officers were injured in a melee that developed as forces broke into two caravans in which some 200 youths were barricaded.

The new structures at the site replaced others that have been demolished in the past. After years of legal wrangling, several dozen families who had been living at the site finally left in 2017, with the government building them new homes in the nearby Binyamin town of Shilo. However, the original residents had pledged to come back – and several weeks ago, they announced that they had acquired the land where the old Amona community stood from its purported Arab owners.

The families acquired two caravans and set them up at the site several weeks ago. Earlier this week, the Civil Administration demanded that the families leave the site until all legal issues were resolved – and until the construction was approved by the defense minister, Binyamin Netanyahu.

Police said that officers who came to execute the eviction orders were met with a violent response, with protesters burning tires and throwing rocks at them. Representatives of the protesters told the media that it was police who acted with violence, ramming crowds of youths who were passively resisting arrest, beating them with nightsticks and firing tear gas at them. Two protesters were arrested.

The incident was quickly harvested for political capital on both the right and the left. The fact that the latest incident at Amona came under the watch of Binyamin Netanyahu as defense minister ripped the mask off the purported right-wing views of the prime minister, the New Right party said. If Amona was demolished because it was illegally built, the same should apply to Arab “settlements” – including Khan al-Ahmar, an Arab village with dozens of structures that was built near Maaleh Adumim. “We call on the prime minister to immediately enforce the law at Khan al-Ahmar. The law is the law. The selective enforcement of the law against Jews alone, because of fear of what the Arabs will do, broadcasts the weakness of the government in its dealings with the Palestinians, and harms the deterrence of Israel.”

The Otzma Yehudit movement, led by former MK Michael Ben-Ari, said that “the old right – Netanyahu, Bennett and Shaked – carried out a disgusting act last night. Evicting Jews from their homes is a red line, and the use of beatings, tear gas and rubber bullets by police against Jewish youths shows that the government has lost its way. This is the same government that refuses to evacuate Khan al-Ahmar, but when it comes to Jewish kids, they are very tough.”

MK Betzalel Smotrich (Jewish Home) said that “no diplomatic accomplishments by Netanyahu in Brazil can outweigh the harm that Netanyahu is doing to settlements. If he wanted to, Netanyahu could legalize the site in five minutes, but he would rather evict the residents. But he won’t evacuate Khan al-Ahmar – he is weak against the Arabs but tough on the Jews.”

The left also found ways to blame Netanyahu for the violence. “The violence by the Amona protesters is the result of their believing that they have backing for their path from the coalition,” said Yesh Atid head Yair Lapid. “There can be no such thing as support for violence against the IDF or police.” Labor MK Eitan Cabel said “there is a clear connection between Netanyahu’s attacks on the rule of law and the attacks on police by Israelis. I expect the prime minister and his ministers to back police and to act against those who raise a hand against them.”