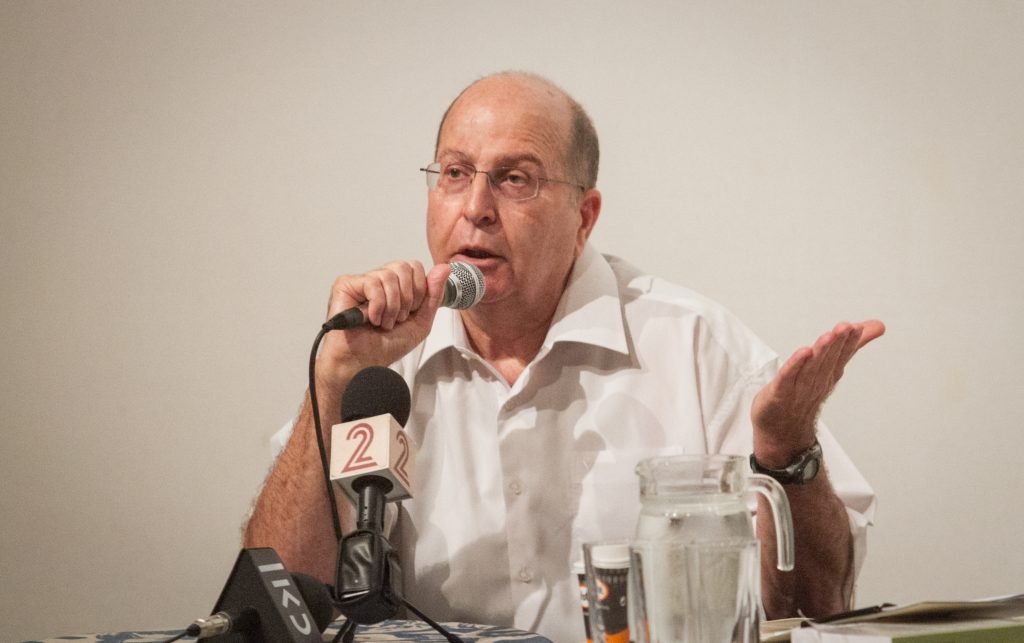 After announcing his entry into politics several weeks ago, former IDF Chief of Staff  and Defense Minister Moshe Yaalon announced the formation of his new party – Telem, an acronym in Hebrew for “National State Movement,” using a Hebrew term for proper government, without the aura of corruption or negative politicking. “This is a holiday and a wonderful day for Israelis,” Yaalon said after filing his paperwork. “It’s a day of hope mixed with great responsibility for myself and my colleagues. I have dedicated my whole life to ensuring a secure Israel. I was taught, and I teach that it is important to take responsibility, in a modest manner, to lead by example, and to do everything to ensure the security of Israel.”

Yaalon said that the time had come “for a new leadership, one that we can rely on. I am doing this out of responsibility to future generations, out of respect to the memories of my friends, commanders, and others who fell in war, and out of sense of a higher mission. I am proud to stand at the head of Telem, where the good of Israelis will be paramount.”

In a weekend speech, Yaalon slammed Prime Minister Binyamin Netanyahu, saying that he would not join a Netanyahu-led government. “Once, ‘right’ and ‘left’ referred to economic policies, with the two sides differing on social policy. Today, anyone who doesn’t agree with Netanyahu politically is called a ‘leftist’ – like President Reuven Rivlin, who believes in integrating the Arab population.

“Our greatest strategic threat is not Iran, Hezbollah, or Islamic State, but our internal disagreements. We can find ways to work together, for the left and right parties who believe in Zionism to collaborate,” said Yaalon, adding that “based on this I see an opportunity to work with Benny Gantz.”

The name chosen by Yaalon has been used in the past: After leaving Labor in 1981, Moshe Dayan established the Telem party, together with Zalman Shoval and Yigal Hurvitz. The party won two seats in the 1981 election, joining the government of Menachem Begin. Dayan passed away a short time after the election, and his seat was taken by Hurvitz, who was later appointed Finance Minister, presiding over an economy in which inflation grew by hundreds of percent.

Yaalon was the Defense Minister who pursued charges against IDF soldier Elor Azaria, after he killed a terrorist who had attacked IDF soldiers in Chevron in 2016. Commenting on the Yaalon announcement, outgoing Science and Technology Minister Ofir Akunis said Wednesday that Yaalon was “a true leftist. He group up in the Labor Zionist movement, and tried to fool the Likud by claiming he was a right-winger. After the Azaria incident, his political career is over, in my opinion. His party will not pass the electoral threshold.”