Community Slapping the Yetzer Hara Back: A Unique Look at the Challenges of Technology
Community 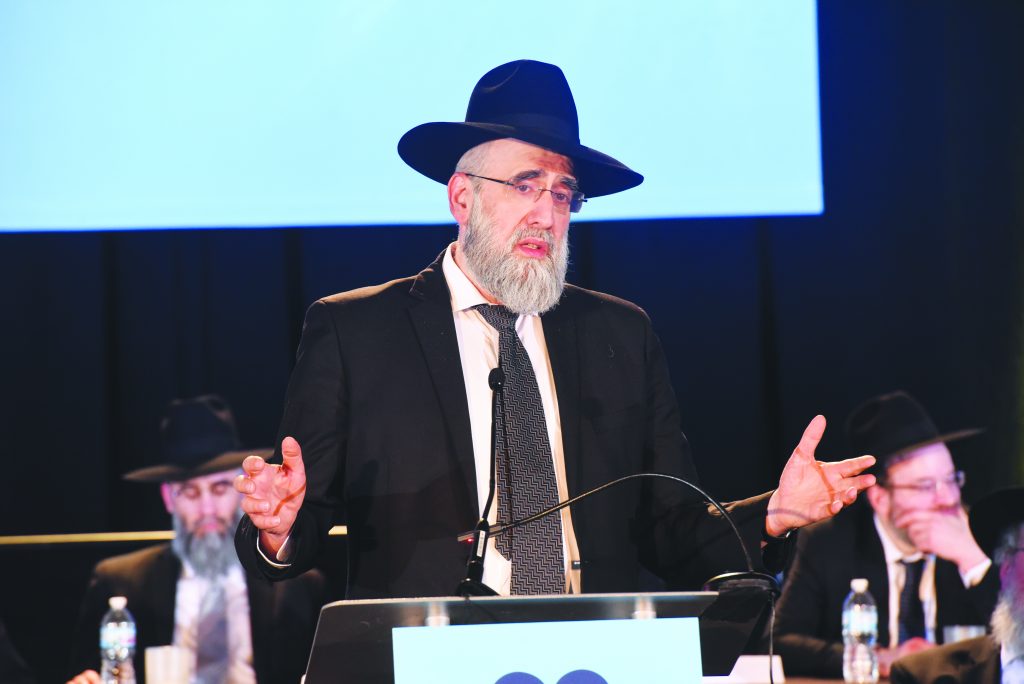 In an event focused on the theme of “clarity,” it was most appropriate that one of the Midwest Agudah Convention featured sessions was dedicated to what is arguably the cause, or at least enabler, of the largest amount of confusion about the fundamentals of life and Torah values in today’s generation — the challenge of technology.

The session’s featured speaker, Harav Yosef Elefant, Maggid Shiur, Yeshivas Mir, Yerushalayim, opened his remarks saying that in his extensive dealings with talmidim and others who have gravitated to him for advice on their lives, there is a common cry for help as to how to deal with the risks and challenges of internet access in all its many forms.

“There’s a tzaakah of what to do,” he said. “Some of this has to do with inappropriate material, but it goes well beyond that and I wanted to speak about some things that are less spoken about.”

The event was billed as a follow-up to a monumental event in Chicago’s community held two days before this past Yom Kippur. At a mass gathering of the community, addressed by several Gedolei Yisrael, men and women of all ages accepted on themselves various kabbalos aimed at taking greater control of the effects of technology on their lives. It was the kickoff of what was titled Project Focus and has had a major effect on the kehillah since.

Rabbi Ephraim Goldman, director of Community Education for TAG Chicago and S’gan Menahel of the Fasman Yeshivah High School, addressed the session and discussed the unique nature of the challenge at hand.

“The yetzer hara has fought with Klal Yisrael for generations, but there’s something about the phones that’s different; we’ve become attached to them on a personal level,” he said.

Rabbi Goldman explained his point by saying that by nature if a person is constantly involved with a given thing, he cannot help but become emotionally attached to it on some level.

“We are so physically attached to our phones, that we’ve become emotionally attached to them,” he said. Building on this point, he expounded on the advantages of not carrying one’s phone into a beis medrash or around one’s home as a means of not only minimizing their use, but of creating a sense of emotional distance. Rabbi Goldman noted that in this regard the need to separate is equal whether one uses a smartphone or “flip” model and said that many families had introduced a box to their homes, where all cellphones are to be deposited within the house. In this manner, they can be used when needed, but do not become a permanent part of us as human beings.

“It changes your phone from something you are emotionally attached to, to a tool that you use,” he said. “Children [come to] see it as something that I don’t always need, something I can put away.”

Rav Elefant said that over the years internet access has become an increasing part of life. The approaches that families have taken is coming to define what he described as a cultural divide in the Orthodox community at large.

“We’re seeing a dichotomy … in big communities. There are those who are largely unexposed, which is a big tzibbur. Every group has its challenges, but, in this regard, they’re doing very well and their kids are packing the batei medrash. But there is another group which has not done such a good job, and their kids never really learned [Torah] properly; they just don’t know how to do it,” he said.

A subject which Rav Elefant expanded on was that, in addition to exposure to information and images that might be objectionable, internet culture, video games, and the like hamper a boy’s ability to develop his mind into a tool that can learn Torah in a serious way.

“For boys who have to learn Gemara, it’s a deathblow,” he said. “The best Rebbi can’t compete with a mind that’s dull and a seichel that’s been downgraded. He [a child] can’t play video games for hours and then use his mind to learn a Tosafos. That’s why we’re seeing kids who don’t have ADD and yet who are having serious problems [learning].”

Examining the phenomenon of one’s mundane daily events, thoughts, jokes, and the like being passed around by way of social media, Rav Elefant said that the trend has led to a culture of shallowness affecting chinuch, shalom bayis and the very nature of people’s personalities.

“Ninety-nine percent of the information being passed around is that nothing happened. What we are giving over to our children is [a sense of importance] for nonsense and stupidity. Events that have no meaning are given importance,” he said. “There’s a new shalom bayis problem that I never heard about before, that couples don’t have what to talk about. There is a breakdown of intimacy; if I share everything with the whole world, what’s special about our spouses?”

Quoting Rabbeinu Yonah that the characteristic of tznius and chachmah are interconnected, Rav Elefant explained that by constantly “sending out” whatever information comes a person’s way, he never absorbs it or is able to incorporate it properly into his consciousness.

Despite the daunting challenges discussed, Rav Elefant said that the shallow nature of the dangers of technology can be seen as a blessing of sorts.

“If two people have an ideological fight and then one slaps the other one, who won? Obviously the one that got slapped — because it means the other one ran out of things to say,” he said. “Klal Yisrael went through much bigger challenges: Zionism, communism; in the United States [the lure of unrestrained] capitalism. Now the yetzer hara is just slapping us.”