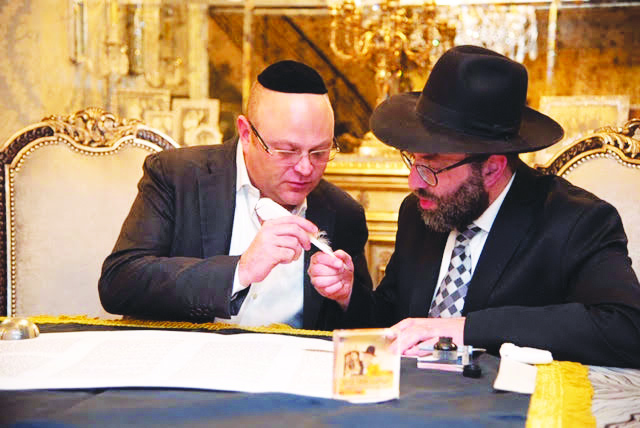 It has been almost a year since the petirah of Harav Raphael Wachsman, zt”l, the beloved founder and Rosh Yeshivah of WITS yeshivah in Milwaukee.

For almost 40 years, Rav Wachsman was moser lev v’nefesh to build a yeshivah and nurture the students that passed through its doors.

A talmid of Harav Henoch Leibowitz, zt”l, Rosh Yeshivah of Yeshivas Chofetz Chaim, Rav Wachsman was imbued with a mission and life’s purpose to be a marbitz Torah.

Growing up in such a home inspired his son, Rabbi Avraham Wachsman, also a musmach of Yeshiva Chofetz Chaim, to pursue his own mission of harbotzas haTorah.

Eight years ago, in 2010, Rabbi Avraham Wachsman founded Orlando Torah Academy, with 12 children. With great siyatta diShmaya, OTA has blossomed and grown to almost 100 students from preschool through eighth grade.

After the petirah of his father, Rabbi Avraham Wachsman embarked on a mission to write a sefer Torah as a zechus for his father’s neshamah. This Torah will be the first for Orlando’s Torah community and a symbol of the continuity of Torah.

Rav Raphael Wachsman’s influence is felt strongly in Chicago, and many of his talmidim live in the community. Consequently, on Tuesday, December 25, a kesivas osiyos event was held in Chicago. Talmidim of Rav Wachsman, Mr. and Mrs. Benjy Israel and Mr. and Mrs. David Hartman co-hosted the event at the Israel’s home. Rabbanim, friends, talmidim and their children came to participate and write a letter in this monumental sefer Torah. It was a kiddush Hashem and a kavod for the niftar. It should be an aliyah for the neshamah of someone who truly lived a life of Torah. Yehi zichro baruch.

For more information on this special project, please contact rabbiaw@orlandotorah.com.