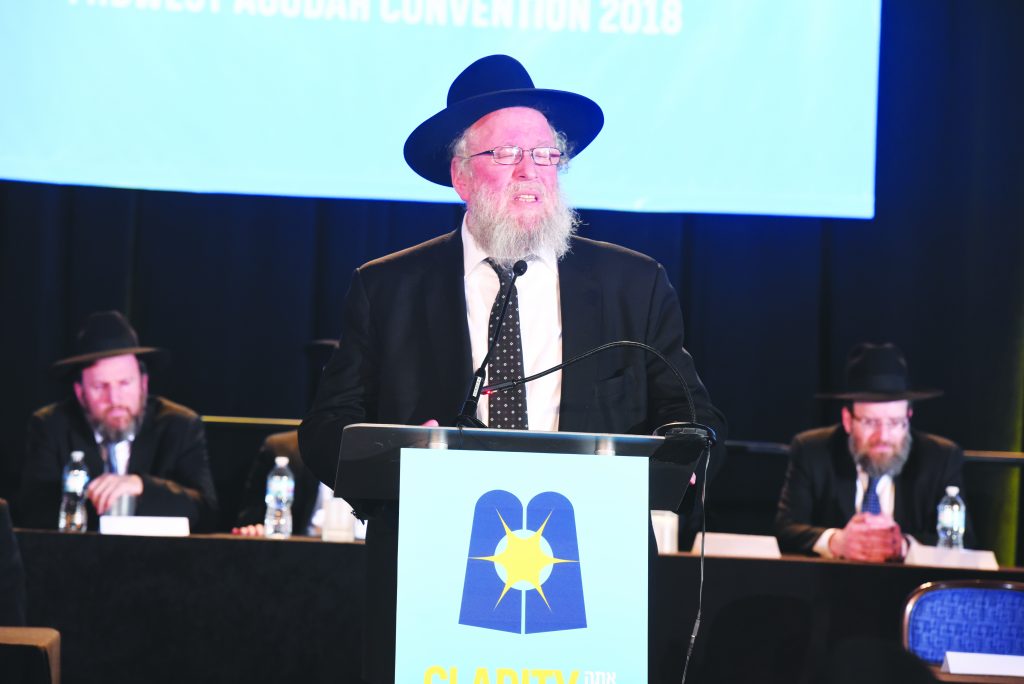 Amid the enthusiasm at the 10th Midwest Agudah Convention, the absence of Harav Avrohom Chaim Levin, zt”l, Rosh Yeshivah, Yeshivas Telshe-Chicago, left a gap that was mentioned at each major session.

For decades, the Rosh Yeshivah was one of the most influential forces in building Torah in Chicago and many other communities in the region and, perhaps, the most central in planning and developing the role of Agudath Israel in the Midwest. The poignancy of his sheloshim coinciding with an event that is largely a celebration of those two accomplishments was inescapable.

On Motzoei Shabbos, the first half of the keynote session was dedicated to the memory of this unique Gadol baTorah as a brief tribute to his greatness and the breadth of his accomplishments.

Adapting the words of the Brisker Rav following the passing of the Chazon Ish, Harav Elya Brudny, shlita, Rosh Yeshivah, Yeshivas Mir-Brooklyn, opened his remarks noting the scale of the loss.

The somber and inspiring session was opened by Mr. Yisroel Gluck, Chicago askan and philanthropist who focused largely on the Rosh Yeshivah’s great dedication to the Agudah, particularly in his early days in the city.

Explaining that his decision to establish an office for the organization in Chicago’s community in the early 1960s was a move that he did at some level of risk, he noted that “it would have been much easier for him to leave his membership card in Cleveland.”

It was a reference to the Wickliffe campus of the Telshe Yeshivah, where Rav Levin first became involved in Agudah at the behest of his Rebbi, Harav Eliyahu Meir Bloch, zt”l.

A video presentation featured several clips of the Rosh Yeshivah speaking at Agudah events over the years. One showed him relating the oft-repeated story of his entry into the organization’s work.

“I told him [Rav Eliyahu Meir] that when I get involved in something, I do so with my whole heart and soul, and it will definitely lead to bitul Torah. He told me to do it; ‘I’ll tell you when to stop,’ but he never told me to stop,” said Rav Levin.

Rav Brudny spoke of the Rosh Yeshivah’s constant striving for higher levels in avodas Hashem, noting that, despite being steeped in the mesorah of Telshe, the three weeks that he spent together with his grandfather through marriage, Harav Yechezkel Levenstein, zt”l, left a lifelong impression on him.

“He worked dargah [level] after dargah, he worked and worked,” he said. Rav Brudny said that although we cannot understand how Rav Levin balanced different influences and carried on his own avodah, it should still inspire us to “find our own way to sheleimus.”

Harav Shmuel Yehudah Levin, a son of the late Rosh Yeshivah, and himself a Rosh Yeshivah in Telshe Chicago, spoke emotionally, noting the difficulty in seeing and hearing a recording of his father so briefly after his petirah.

Rav Levin emphasized that all of his father’s efforts and accomplishments in klal matters were not something separate from his gadlus in Torah, but rather something that flowed directly from it.

“His gadlus was his pashtus,” he said. “My father’s life was a life of kvod Shamayim. He was not only mechanech us, the mishpachah with that; he was mechanech talmidim and a city to be able to increase kvod Shamayim in the whole world.”