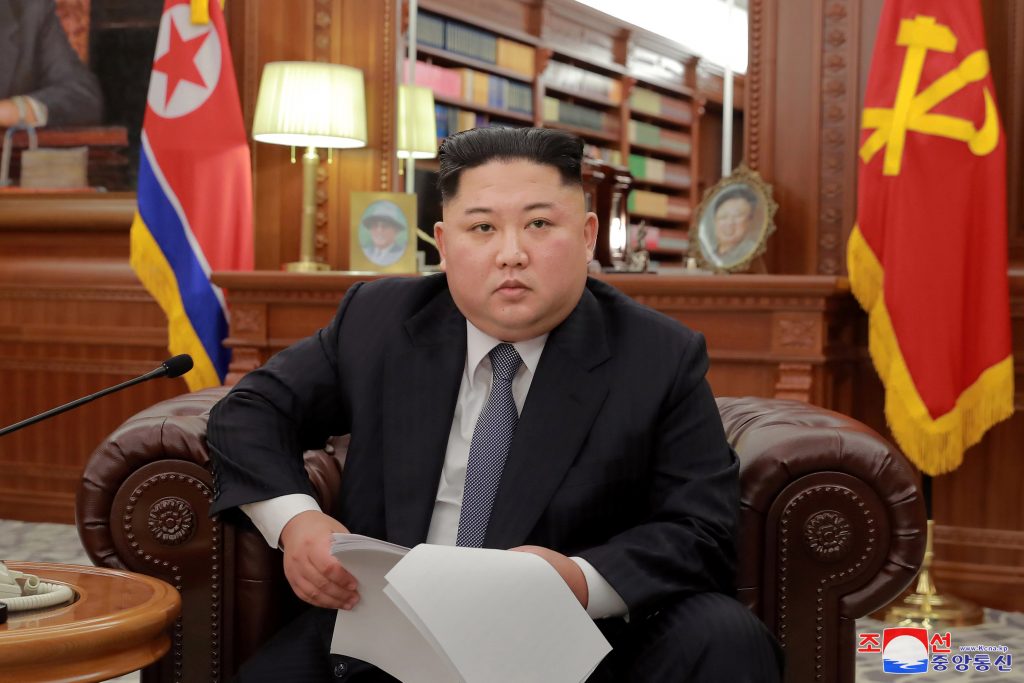 North Korean leader Kim Jong Un said on Tuesday he is ready to meet President Donald Trump anytime to achieve their common goal of denuclearizing the Korean Peninsula, but warned he may have to take an alternative path if U.S. sanctions and pressure against the country continued.

In his new year address, Kim said denuclearization is his “firm will” and suggested for the first time that North Korea would no longer produce nuclear weapons, but also urged Washington to take unspecified corresponding action to speed up the stalled diplomatic process.

North Korea might be “compelled to explore a new path” to defend its sovereignty if the United States “seeks to force something upon us unilaterally … and remains unchanged in its sanctions and pressure,” Kim said in his nationally broadcast address.

The comments are likely to fuel growing skepticism over whether Pyongyang intends to give up the nuclear weapons program that it has long considered essential to its security.

There was no immediate reaction from the U.S. State Department, but South Korea‘s presidential office welcomed Kim’s speech, saying it carried his “firm will” to advance relations with Seoul and Washington.

Kim and Trump vowed to work toward denuclearization and build “lasting and stable” peace at their landmark summit in Singapore in June, but little progress has been made since.

Pyongyang has demanded that Washington lift sanctions and declare an official end to the 1950-53 Korean War in response to its initial, unilateral steps toward denuclearization, including dismantling its only known nuclear testing site and a key missile engine facility.

Those measures were in line with its resolve to “no longer make, use or spread” nuclear weapons, Kim said, indicating a possible moratorium on weapons production for the first time. Although Pyongyang did not conduct nuclear or missile tests last year, satellite images have pointed to continued activity at the North’s related facilities.

U.S. officials say those initial steps were not confirmed and can be easily reversed, and have called for strict sanctions enforcement on the impoverished country until full, verifiable disarmament. Washington halted some large-scale military exercises with Seoul to aid nuclear negotiations, but smaller drills continued.

Kim called for South Korea to “completely stop” joint military drills with the United States involving strategic assets, while multilateral negotiations among countries involved in the armistice agreement should be pursued to build a permanent peace regime.

The two Koreas technically remain at war because the conflict ended in a truce – signed by North Korea, the United States and China – not a peace treaty.

“Now that North and South Korea decided to take the path of peace and prosperity, we demand that joint military exercises with outside forces should no longer be allowed and deployment of war equipment such as foreign strategic assets should be completely stopped,” Kim said.

Analysts said Kim’s message sent clear signals that North Korea is willing to stay in talks with Washington and Seoul this year – but on its own terms.

“North Korea seems determined in 2019 to receive some sort of sanctions relief. … The challenge, however, is, will Team Trump be willing to back away from its position of zero sanctions relief?” said Harry Kazianis at the Washington-based Center for the National Interest.

“Kim’s remarks seem to suggest his patience with America is wearing thin.”

The annual speech is closely watched as a rare public appearance for the young leader, setting the tone for his domestic and foreign policies for the year ahead.

After racing toward the goal of developing a nuclear-tipped missile capable of hitting the United States in 2017, Kim used last year’s speech to warn that “a nuclear button is always on the desk of my office” and an order for mass production of nuclear bombs and ballistic missiles.

But he also offered to send a delegation to a sports event in the South in February, setting off a flurry of diplomacy that included three summits with South Korean President Moon Jae-in, and the meeting with Trump in June.

Dressed in a Western-style black suit and a navy and silver tie, Kim sat on a leather couch against a backdrop of bookshelves and portraits of his late father and grandfather, his predecessors in the Kim dynasty.

The setting, which mimics the one favored by Chinese President Xi Jinping for his new year address, marks a departure from previous years when Kim stood before an assembly hall packed with officials.

“He appeared more confident than ever, emboldened by some of the progress he made last year, which also implies [that] he thinks he has the upper edge in the negotiations with the United States as a nuclear-armed state,” said Shin Beom-chul, a senior fellow at the Asan Institute for Policy Studies in Seoul.

In the 30-minute speech, Kim spent more than 20 minutes highlighting his campaign to create a self-reliant economy despite a “harsh economic blockade.”

As a way to tackle chronic power shortages, he raised the need for atomic energy. North Korea is known to have developed at least three nuclear plants, including a five-megawatt reactor at its main Yongbyon complex producing weapons-grade plutonium, according to Seoul’s Unification Ministry.