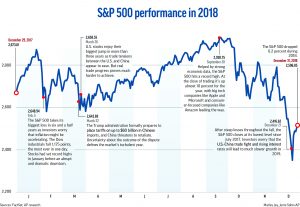 The stock market’s gyrations have dominated headlines for a solid two weeks now, but things can’t be as bad as they sound. Or can they? We looked at the numbers to put this crazy time period in context.

What’s Going On With the Stock Market?

For almost a decade after it bottomed out in March 2009, the stock market seemed as if it would only go up. There had been bumps and corrections along the way. But the sell-off in U.S. stocks, which began in October, turned 2018 into the worst year markets have seen in a decade. The S&P 500 index, the market’s main benchmark, finished the year with a loss of 6.2 percent. The last time the index fell for the year was in 2008 during the financial crisis. The S&P 500 posted tiny losses in 2011 and 2015, but eked out small gains in both years once dividends were included.

Is It as Bad as It Seems?

In the short term, yes. But over the long term, it’s not so gloomy.

Unless you’ve done the bulk of your investing after September 2017 or made some unfortunate stock picks, you’re probably still in the black. You’re probably doing quite well. In the long run, at least.

The worst time to start investing in the past decade would have been around Sept. 20, 2018 – the S&P 500 has fallen about 15 percent since then. The best would have been at the height of the Great Recession, in March 2009.

Depending on how you reinvest your dividends and other gains, you’re probably still better off than you were at the same time last year, even if the market’s in the same place.

Is Everything Down That Much?

No. One S&P sector, utilities, grew slightly in value in the fourth quarter. But it was the exception. The market retreat has been widespread. Industrials, technology stocks and energy stocks suffered the most. That last category has been hammered by a drop in oil prices.

Who Gets Hurt When Stocks Drop?

About half of Americans (49 percent) own any stock at all.

Those figures come from a recent analysis of Federal Reserve data by leading U.S. wealth scholar Edward Wolff, an economist at New York University. His figures sometimes differ from those released by the Federal Reserve by a few percentage points as a result of methodological differences.

Wolff found that 4 percent of the least-wealthy quarter of Americans reported owning more than $10,000 worth of stocks. For middle-income Americans, that figure was 27 percent.

As a rule, young people, less-educated people, rural people and those who belong to racial and ethnic minorities are less exposed to the market’s fluctuations – primarily because they possess less wealth to begin with. For example, while 17 percent of a typical white U.S. resident’s wealth is in the stock market, the figure is as low as 5 percent for black and Hispanic Americans.

Of course, lower-income households will still feel burned by a falling market. Their holdings may be smaller and make up a smaller percentage of their overall assets, but they are also living on a thinner margin. If a stock market decline leads to a recession, they are likely to feel the effects, such as higher unemployment and slower wage growth. 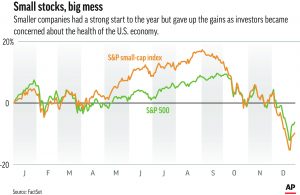 Why Is the Stock Market Down So Much?

It could also be the beginning of something darker. Labor-market indicators and other economic data remain promising, but more economists see clouds on the horizon. Earlier this month, Diane Swonk, chief economist at the professional services network Grant Thornton, moved her forecast for the next recession forward to the first half of 2020.

Who Should Be Blamed? The Fed? Trump? Congress? Bankers? Executives? Consumers?

We can’t point fingers with a high degree of confidence.

As we previously noted, it could be a healthy correction after a sharp rise in values. It could also foreshadow a broad economic slowdown. Of 21 bear markets on record since the 1920s, 11 were directly associated with a recession, according to an analysis tweeted by Charlie Bilello of Pension Partners.

We have long known the Federal Reserve’s cycle of interest-rate hikes was coming, but the timing of the market’s swoon implies it’s part of the explanation. The Fed is moving to prevent the type of excessive inflation that could pose a larger threat to the economy.

Other contributors probably include President Trump’s trade war, which may be feeding into an already slowing global economy; the fact that the U.S. economy is probably coming off its peak after gains partially fueled by a big tax cut in 2017; and uncertainty emanating from the White House.

Markets indicate that uncertainty, broadly speaking, is becoming a significant factor. Several measures of uncertainty are hitting the highest levels seen since the 2016 U.S. presidential election, and research has shown that businesses are slower to hire and invest when uncertainty is high.

Is There any Upside to all This Selling?

Stocks are cheaper. It costs less on average to own a piece of a public U.S. corporation than it did at this time last year. So, if you’re of the opinion that companies are undervalued, you’re buying at a discount. The biggest gains go, almost by definition, to those who buy low. But sometimes those gains are realized only in the long run.

But are companies undervalued? One way to measure this is by comparing their share price to their earnings per share.

The companies of the S&P 500 had been showing price-to-earnings ratios well above their historical average in the last couple years, peaking at a level that felt almost bubbly. But after the recent sell-off, they’re back within a normal historical range. By the standard of the past two economic expansions, their price is about what we’d expect.

What Happens After a Period of Intense Selling Like This?

In the year after a bear market finally ends, the S&P 500 has in the past 60 years grown between 21 and 69 percent. But we’re not even certain U.S. markets have entered a bear market, let alone hit bottom.

Bear markets often don’t stop at a 20 percent decline, however. According to Yardeni Research, other bear markets of the past 60 years have typically fallen around 34 percent. Three, those beginning in 1973, 2000 and 2007, didn’t end until they’d fallen 48 percent or more.

What About the Baltic Dry Index?

Excellent question. We applaud your interest in arcane leading indicators. We agree that it might help us understand whether the global slowdown will continue.

The Baltic Dry Index is neither Baltic nor particularly dry, though we’re happy to report that it is an index. It measures demand for shipping capacity on major routes worldwide. It fell 17.5 percent in the fourth quarter, through Dec 25. The drop signals that demand for shipping of key raw materials is falling, which might imply that manufacturers plan to make fewer goods in the months and years to come.

But shipping is complicated. This index is complicated. There are other perfectly good reasons it might fall. In other words, there’s a reason more people don’t avidly follow the Baltic Dry. But thanks for asking!

So What Should I Do?

Talk to your financial adviser. We don’t give financial advice; we crunch numbers on the internet. But our keyboard-jockey suggestion? Keep calm and stay diversified.

We have more than a century of data showing that on the whole, the market keeps rising. The same, alas, can’t be said of individual companies.

Now that your portfolio has your attention, use this opportunity to review your long-term goals. Why are you investing, and how can your money best be deployed for that specific purpose? Saving for a down payment on a house, your children’s college education and your retirement would probably all call for different strategies.