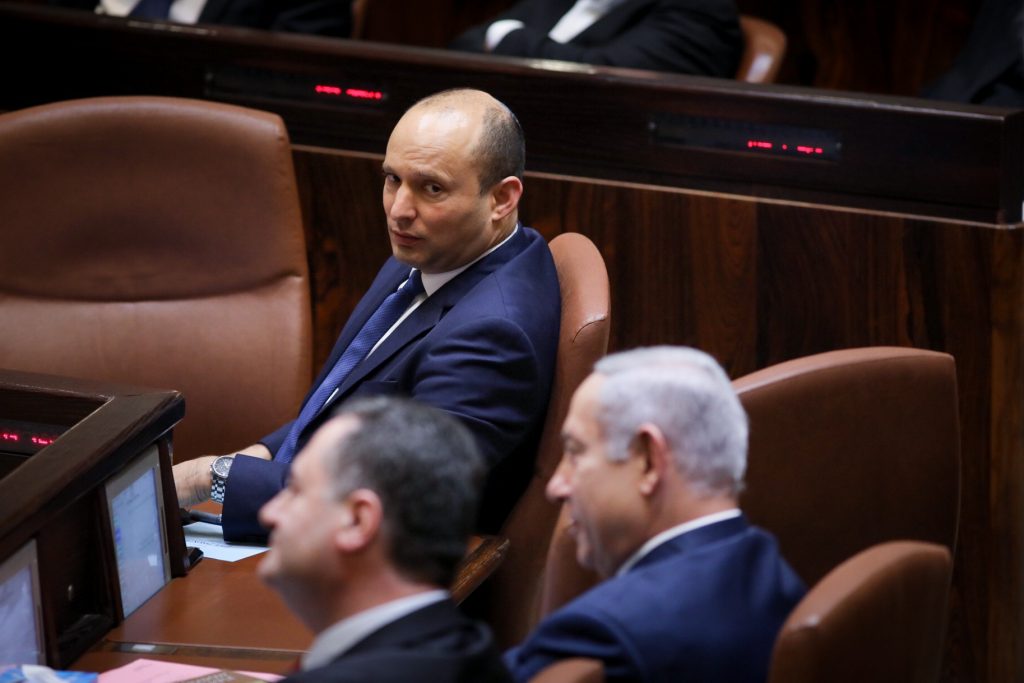 Prime Minister Binyamin Netanyahu has not yet commented publicly on the establishment of the New Right Party by Naftali Bennett and Ayelet Shaked, but in private conversations with aides, he has expressed “grave concern” over what the move means to the right, Yisrael Hayom reported Monday. The breakup of Jewish Home “is a death blow to the national camp and will lead to the establishment of a leftist government,” Netanyahu was quoted as saying.

Netanyahu, still on a state visit to Brazil, is concerned that either or both parties that were formally a single unit in Jewish Home may not get enough votes to pass the election threshold – and Jewish Home is a crucial coalition partner that Netanyahu is counting on to establish his next government. Jewish Home was actually the strongest support party – and polls show that other potential coalition partners, including Shas, Kulanu, and Yisrael Beytenu could potentially not pass the threshold, meaning that their votes will be lost and more weight will be given to leftist parties in the assignment of Knesset seats.

Indeed, a Kan News poll Sunday night showed Jewish Home failing to make the electoral threshold – along with Yisrael Beytenu. With that, the poll shows Bennett and Shaked’s New Right Party garnering 14 seats, with the Likud getting 27. Yesh Atid would get 16, while Benny Gantz’s Resilience party would get 13. Zionist Camp would sink to 9 seats. Kulanu would get 7 seats, as would United Torah Judaism, Shas 4, Meretz 6, and Orly Levy-Abukasis 5.

Assuming UTJ, Shas and Kulanu will be in the coalition, Netanyahu can count on 59 seats in his coalition before he has to go recruiting a party not among his “natural allies.” With that, the center-leftist parties of Yair Lapid, Gantz, and Avi Gabay are 15 seats short of the 61 needed to form a government.

A Channel Ten poll, meanwhile, shows Jewish Home also failing to make the threshold grade, while New Right would get only 8 seats. However, the Likud would get 30 seats, according to the poll. In this poll, Yisrael Beytenu remains in the Knesset with 5 seats, and Shas gets 5 as well.

Another version of the Channel Ten poll has New Right getting 6 seats and Jewish Home making the threshold with 4 seats, but the Likud getting only 28. In either case, the Likud would be the most likely to form a coalition – but would have to pull in another party from the center-left group.

On Sunday, Tourism Minister Yariv Levin slammed Bennett and Shaked, saying that “it’s clear that their intention is to remove Netanyahu from office,” as they paved the way for themselves to lead the right. “They used Jewish Home and abandoned it, and they will take votes from the right in the elections and present them to the left, directly to Yair Lapid, with whom Bennett had a ‘brotherly’ relationship in the last election. Lapid was after all very happy at the new party’s formation,” he added.