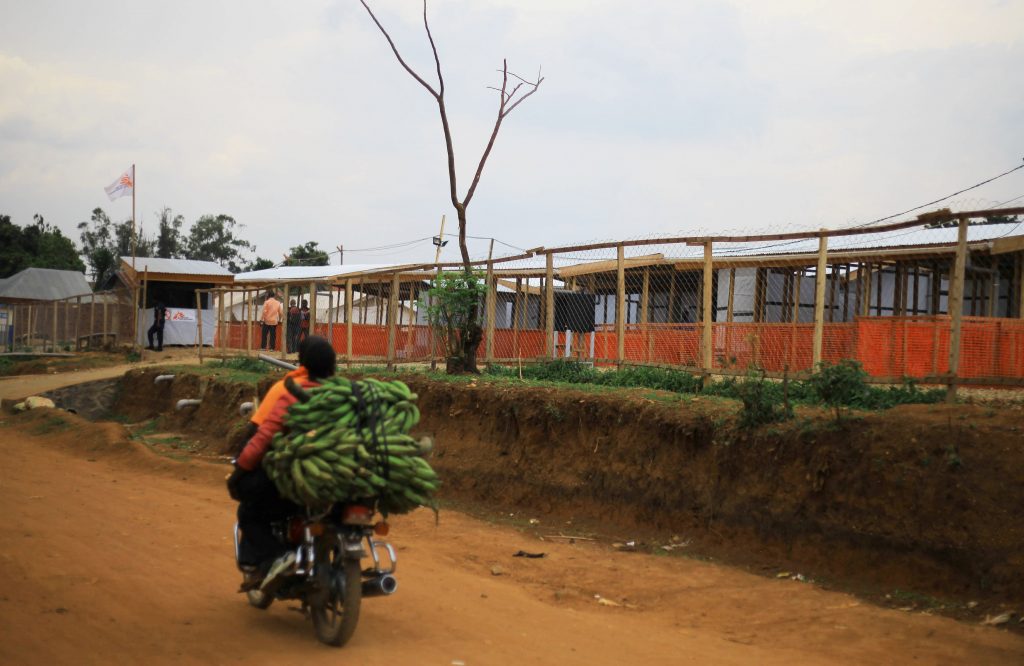 An American health worker who was possibly exposed to Ebola while treating patients in the Democratic Republic of Congo was evacuated to the United States Saturday and placed in a secure area at the University of Nebraska Medical Center, hospital officials said. The person has no symptoms of the deadly hemorrhagic fever and is not contagious, but will be monitored closely for up to two weeks, hospital officials said.

If symptoms develop, the individual will be admitted to the medical center’s biocontainment unit. The person was treating patients outside the urban epicenter of the outbreak and had contact with a patient who was later diagnosed with Ebola, according to U.S. officials. They are not aware of any other exposure to U.S. citizens. The individual was flown back to the United States in a private plane, not commercial aircraft.

The American was among hundreds of health-care personnel who have been responding to a growing Ebola outbreak in Congo, the second largest in history, with nearly 600 cases and 360 deaths. The outbreak in northeastern Congo has been especially difficult to control because it is taking place in an active war zone. Attacks on government outposts and civilians by dozens of armed militias have complicated the work of Ebola response teams, who often have had to suspend crucial work tracking cases and isolating people infected with the deadly virus. Violence has escalated in recent weeks near Beni, the urban epicenter in North Kivu province, and the city of Butembo.

Congo’s health ministry, the World Health Organization and some non-governmental organizations have been forced to temporarily suspend their Ebola containment work because of protests related to Sunday’s presidential election. The government issued a last-minute decision to bar people in Beni and Butembo from voting because of the outbreak. About a dozen U.S. government personnel, including Ebola experts from the Centers for Disease Control and Prevention, are working on the Ebola response in the Congolese capital of Kinshasa, about 1,000 miles away.

Taylor Wilson, a hospital spokesman, said the potential exposure took place about a week ago. Wilson said he did not know whether the person had been given the experimental Ebola vaccine that has already been given to more than 53,000 people in Congo, including health-care personnel.

“This person may have been exposed to the virus but is not ill and is not contagious,” said Ted Cieslak, an infectious diseases specialist with Nebraska Medicine and associate professor of epidemiology in the University of Nebraska Medical Center College of Public Health. If any symptoms develop, the Nebraska team is among the most qualified in the world to deal with them because of the medical center’s previous experience caring for Ebola patients, he said.

The individual will be monitored in a secure area not accessible by the public or any patients. Monitoring could last up to two weeks, hospital officials said. The Ebola virus cannot spread to others when a person shows no signs or symptoms of the disease. Symptoms include fever, severe headache, diarrhea, and unexplained bleeding or bruising. Symptoms may appear anywhere from 2 to 21 days after contact with the virus, with an average of 8 to 10 days.

The virus spreads through direct contact blood or body fluids of a person who is sick with or has died from the diseases and objects contaminated with body fluids from a sick or dead person.

While this person isn’t officially a patient, hospital officials said they will be honoring the person’s request for privacy while the individual is at the medical center. The hospital also said it will not be providing updates on the person’s status unless the person needs to be transferred to the special biocontainment unit.

Nebraska Medicine treated three patients with Ebola during the Ebola epidemic that ravaged Liberia, Sierra Leone and Guinea from 2014 – 2016. In 2015, several others were monitored after exposures, none of whom developed the disease. Nebraska Medical Center is one of a handful of places in the United States that has a dedicated biocontainment unit.