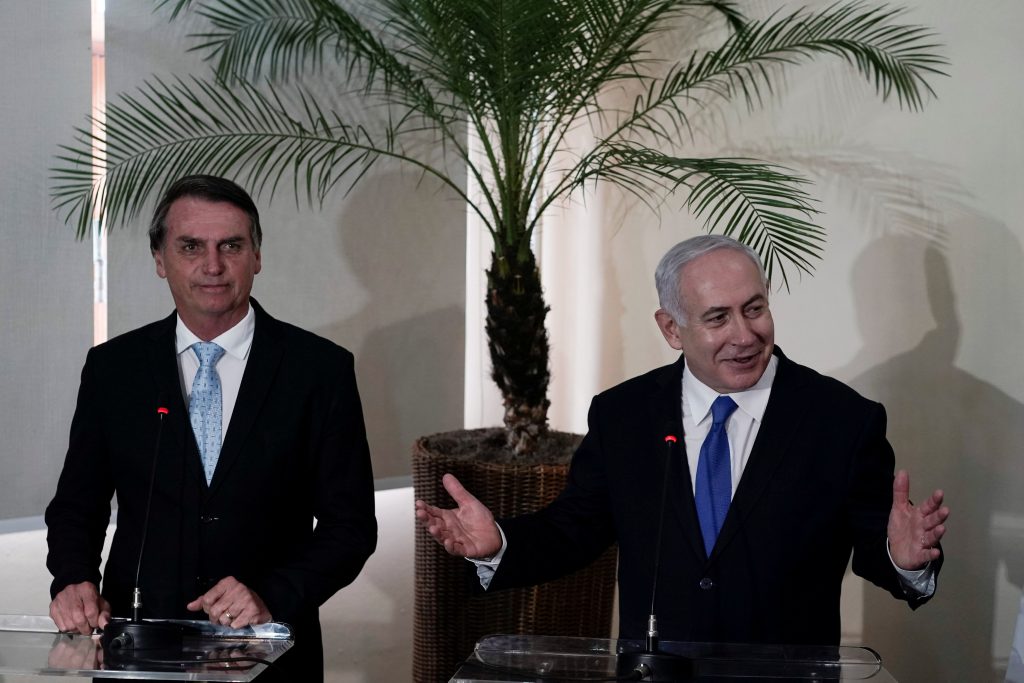 Brazil’s far-right President-elect Jair Bolsonaro met with Prime Minister Binyamin Netanyahu on Friday and while both pledged to deepen ties, there was no announcement as some anticipated of Brazil moving its embassy in Israel to Yerushalayim.

Netanyahu, the first Israeli prime minister to visit Brazil, flew in to Rio de Janeiro to meet with Bolsonaro, an ideological ally who takes office on Jan. 1 after his election victory in October. The two men had lunch in a fort on Copacabana Beach before delivering statements.

“Israel is the promised land. Brazil is the land of promise,” said Netanyahu, adding that Israel could help in areas such as economics, security, agriculture and water resources.

Bolsonaro pledged he would visit Israel by March as a way to thank Netanyahu for the gesture.

“We will be starting a difficult government from January, but Brazil has potential,” Bolsonaro said. “So that we can overcome obstacles, we need good allies, good friends, good brothers, like Benjamin Netanyahu.”

The two also visited a synagogue among tight security including snipers on nearby roofs, where Netanyahu emphasized his hopes the two countries could operate in a more aligned and friendly manner in the future.

Bolsonaro and top aides have repeatedly said he would move Brazil’s embassy from Tel Aviv to Yerushalayim, but since his election he has come under pressure to ditch the idea from powerful backers in the agricultural sector, who fear the decision would hurt their halal meat sales in Arab countries.

The Arab League had told Bolsonaro that moving the embassy to Yerushalayim would be a setback for relations with Arab countries, according to a letter seen by Reuters earlier in December.

Such a move by Bolsonaro would be a sharp shift in Brazilian foreign policy as it was for the United States when President Donald Trump relocated the U.S. embassy to Yerushalayim in May. Brazil has traditionally backed a two-state solution to the Israeli-Palestinian conflict.

Some political observers had speculated that Bolsonaro would use Netanyahu’s visit as the perfect way to make the announcement.

Although Bolsonaro could well make the announcement at a later stage, a senior U.S. State Department official said on Friday the U.S. government expected him to eventually make the move.

“We also welcome President-elect Bolsonaro’s comments regarding moving the Brazilian embassy in Israel to Jerusalem from Tel Aviv in support of Israel’s sovereign right to have its capital of Jerusalem recognized by nations around the world. We look forward to welcoming many more of our friends and allies in Jerusalem,” the official said.