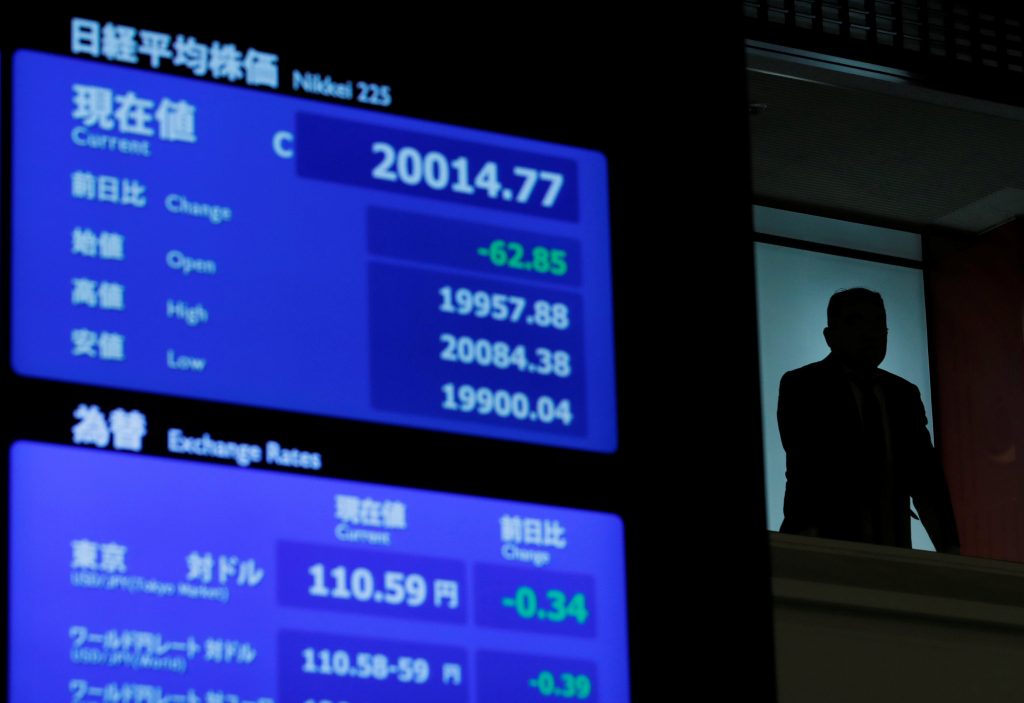 MSCI’s broadest index of Asia-Pacific shares outside Japan rose 0.8 percent. It has fallen 3 percent so far in December.

U.S. stocks roared back to end in positive territory on Thursday, with the Dow adding 1.14 percent, after suffering steep losses for much of the session.

The gains come a day after Wall Street indexes posted their biggest daily percentage increases in nearly a decade following a sharp plunge at the week’s start.

However, all three U.S. major indexes remain down more than 9 percent for December following losses earlier in the month, when factors including concerns over the U.S.-China trade war, slowing global growth and wariness towards the Federal Reserve’s tightening cycle took a heavy toll.

“Selling pressure on U.S. equities is beginning to dissipate, but the VIX index is still around 29 with investor risk sentiment still recovering. A renewed market slide remains a risk,” said Junichi Ishikawa, senior FX strategist at IG Securities in Tokyo.

The CBOE Volatility Index rose midweek to 36, its highest level since early February. It has since pulled back below 30 but remains well above a recent low of 15 at the beginning of December.

Focus turned to the Fed’s stance and whether the equity markets can sustain their recovery at the start of the new year.

“If Fed officials – notably Chairman (Jerome) Powell and New York Fed Governor Williams – show a cautious stance towards further rate hikes given recent instability in the stock markets, that would lead to a rise in U.S. equities and Treasury yields, and a firmer dollar,” said Masafumi Yamamoto, chief forex strategist at Mizuho Securities in Tokyo.

Fed Chairman Powell is due to give a speech on Jan. 4.

While stocks showed signs of recovery, lingering market volatility helped keep safe-haven currencies such as the yen and Swiss franc in demand.

The dollar extended overnight losses and was down 0.3 percent at 110.64 yen. It was on track to lose more than 2 percent this month.

The greenback declined 0.3 percent to 0.9851 francs per dollar after slumping more than 0.8 percent the previous day. The U.S. currency has fallen 1.1 percent against its Swiss peer on the month.

The euro was a shade higher at $1.1450 after gaining 0.7 percent overnight. The common currency was headed for a 1-percent gain in December.

The 10-year U.S. Treasury note yield was up 3 basis points at 2.773 percent, pulling back from a nine-month low of 2.720 percent brushed earlier in the week.

The yield had climbed to a seven-year peak of 3.26 percent in October when the debt market had braced for potentially faster pace of Fed rate hikes in 2019.

Oil prices remained choppy, with U.S. crude futures up 2.2 percent at $45.60 per barrel after sliding 3.5 percent the previous day.

Crude has lost more than one-third of its value since the beginning of October and is heading for declines of more than 20 percent in 2018. In addition to oversupply concerns, worries about slowing global economic growth have dampened investor demand for riskier asset classes and pressured crude.

Brent crude climbed 1.8 percent to $53.11 per barrel after losing more than 4 percent the previous day.

Spot gold, which has benefited this week from the global market turmoil was slightly higher at $1,278.71 an ounce following an ascent to a six-month high of $1,279.06 on Wednesday.