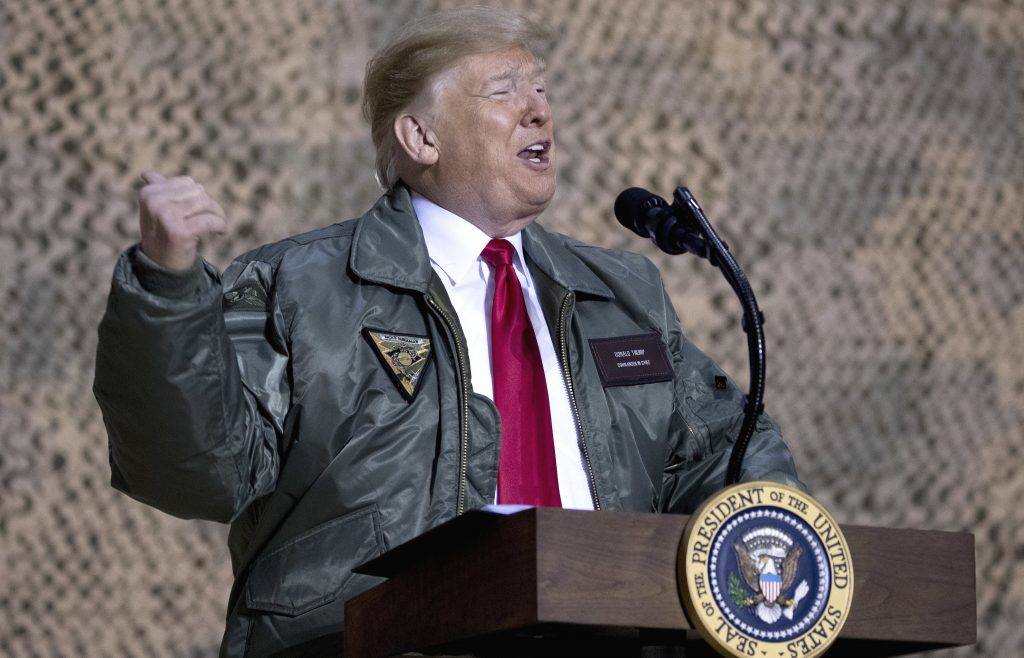 President Donald Trump’s surprise trip to Iraq may have quieted criticism at home that he had yet to visit troops in a combat zone, but it has infuriated Iraqi politicians who on Thursday demanded the withdrawal of U.S. forces.

“Arrogant” and an “a violation of national sovereignty” were but a few examples of the disapproval emanating from Baghdad following President Trump’s meeting Wednesday with U.S. servicemen and -women at the al-Asad Airbase.

Trips by U.S. presidents to conflict zones are typically shrouded in secrecy and subject to strict security measures, and President Trump’s was no exception. Few in Iraq or elsewhere knew the U.S. president was in the country until minutes before he left.

But this trip came as curbing foreign influence in Iraqi affairs has become a hot-button political issue, and Trump’s perceived presidential faux pas was failing to meet with the prime minister in a break with diplomatic custom for any visiting head of state.

On the ground for only about three hours, the American president told the men and women with the U.S. military that Islamic State forces have been vanquished and defended his decision against all advice to withdraw U.S. troops from neighboring Syria.

The abruptness of his visit left lawmakers in Baghdad smarting and drawing unfavorable comparisons to the occupation of Iraq after the 2003 invasion.

“Trump needs to know his limits. The American occupation of Iraq is over,” said Sabah al-Saidi, the head of one of two main blocs in Iraq’s parliament.

President Trump, he said, had slipped into Iraq, “as though Iraq is a state of the United States.”

While President Trump didn’t meet with any officials, he spoke with Prime Minister Adel Abdul-Mahdi by phone after a “difference in points of view” over arrangements led to a face-to-face encounter between the two leaders getting scrapped, according to the prime minister’s office.

The visit could have unintended consequences for American policy, with officials from both sides of Iraq’s political divide calling for a vote in Parliament to expel U.S. forces from the country.

The president, who kept to the U.S. air base approximately 60 miles west of Baghdad, said he had no plans to withdraw the 5,200 troops in the country. He said Ain al-Asad could be used for U.S. air strikes inside Syria.

The suggestion ran counter to the current sentiment of Iraqi politics, which favors claiming sovereignty over foreign and domestic policy and staying above the fray in regional conflicts.

“Iraq should not be a platform for the Americans to settle their accounts with either the Russians or the Iranians in the region,” said Hakim al-Zamili, a senior lawmaker in al-Saidi’s Islah bloc in Parliament.

U.S. troops are stationed in Iraq as part of the coalition against the Islamic State group. American forces withdrew in 2011 after invading in 2003 but returned in 2014 at the invitation of the Iraqi government to help fight the jihadist group. President Trump’s visit was the first by a U.S. president since Barack Obama met with then-Prime Minister Nouri al-Maliki at a U.S. base outside Baghdad in 2009.

Still, after defeating IS terrorists in their last urban bastions last year, Iraqi politicians and militia leaders are speaking out against the continued presence of U.S. forces on Iraqi soil.

Supporters of the populist cleric Moqtada al-Sadr won big in national elections in May, campaigning on a platform to curb U.S. and rival Iranian involvement in Iraqi affairs. Al-Sadr’s lawmakers now form the core of the Islah bloc, which is headed by al-Saidi in Parliament.

The rival Binaa bloc, commanded by politicians and militia leaders close to Iran, also does not favor the U.S.

Qais Khazali, the head of the Iran-backed Asaib Ahl al-Haq militia that fought key battles against IS in northern Iraq, promised on Twitter that Parliament would vote to expel U.S. forces from Iraq, or the militias would force them out by “other means.”

Khazali was jailed by British and U.S. forces from 2007 to 2010 for managing sections of the Shia insurgency against the occupation during those years.

President Trump’s visit would be a “great moral boost to the political parties, armed factions, and others who oppose the American presence in Iraq,” Iraqi political analyst Ziad al-Arar said.

Still, the U.S. and Iraq developed considerable military and intelligence ties in the war against IS, and they continue to pay off in operations against terrorists gone into hiding.

Earlier in the month, Iraqi forces called in an airstrike by U.S.-coalition forces to destroy a tunnel used by IS terrorists in the Atshanah mountains in north Iraq. Four terrorists were killed, according to the coalition.

Iraq’s Sunni politicians have been largely quiet about the presidential visit, reflecting the ties they have cultivated with the U.S. to counterbalance the might of the country’s Iran-backed and predominantly-Shiite militias.

White House press secretary Sarah Huckabee Sanders said Abdul-Mahdi accepted President Trump’s invitation to the White House during their call, though the Prime Minister’s office has so far refused to confirm that.