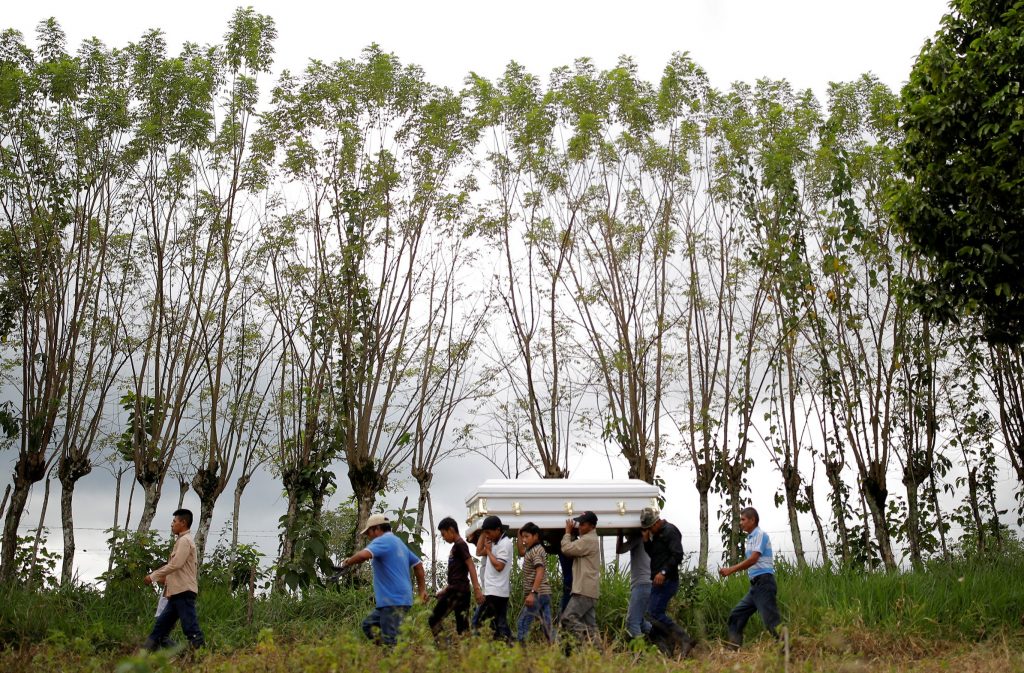 U.S. immigration authorities said Wednesday that they have done new medical checks on nearly every child in Border Patrol custody after the death of a second youngster in the agency’s care in the span of less than three weeks.

Authorities did not disclose the results of the examinations.

An 8-year-old boy, identified by Guatemalan authorities as Felipe Gómez Alonzo, died on Dec. 24 just before midnight. He had been in the custody of U.S. Customs and Border Protection with his father, Agustin Gomez, since Dec. 18.

CBP said in a statement that an agent first noticed that the boy had a cough and “glossy eyes” at about 9 a.m. Monday. He was hospitalized twice that day before dying, the agency said. The cause of death was under investigation.

Officials at the Department of Homeland Security told reporters Wednesday that almost all checks ordered in reaction to the boy’s death had been completed. Some children detained in more remote areas were re-screened by emergency medical technicians or Border Patrol agents, officials said. In other places, some children were taken to medical facilities.

DHS wouldn’t say how many children are in Border Patrol custody.

The agency also wouldn’t say why Felipe and his father were detained for almost a week, an unusually long time, or why they were placed back in detention — at a Border Patrol highway checkpoint — after being released from the hospital.

Another Guatemalan child in U.S. custody, 7-year-old Jakelin Caal, died on Dec. 8 and was returned to her village for burial. Her death — which brought down heavy criticism on U.S. immigration authorities — is also under investigation.

Margaret Huang, executive director of Amnesty International USA, said the Trump administration’s “policies of cruelty toward migrants and asylum-seekers at the border must cease immediately before any more children are harmed.”

CBP said in a statement late Tuesday that it needs the help of other government agencies to provide health care.

The agency “is considering options for surge medical assistance” from the Coast Guard and may request help from the U.S. Department of Health and Human Services, the Department of Defense and the Federal Emergency Management Agency.

With border crossings surging, CBP processes thousands of children — both alone and with their parents — every month. According to CBP statistics, border agents detained 5,283 children unaccompanied by a parent in November alone. Agents last month also apprehended 25,172 “family units,” or parents and children together.

CBP typically holds children for no more than a few days. Youngsters who arrive unaccompanied are turned over to longer-term facilities operated by the HHS. The Associated Press reported this month that 14,300 children were being detained by HHS, most in facilities with more than 100 kids.

U.S. Customs and Border Protection Commissioner Kevin McAleenan said Wednesday that the agency has more than 1,500 emergency medical technicians on staff and that officers are taking dozens of sick children to hospitals every day.

“This is an extraordinarily rare occurrence,” McAleenan told CBS of the recent child deaths. “It’s been more than a decade since we’ve had a child pass away anywhere in a CBP process, so this is just devastating for us.”

CBP officers and the Border Patrol remain on the job despite the partial government shutdown over President Donald Trump’s demand for funding for a border wall.

McAleenan said in a statement that the child’s death was a “tragic loss.”

CBP issued a timeline of what it said happened before Felipe’s death.

Felipe was taken with his father to a hospital in Alamogordo, New Mexico, where he was diagnosed with a common cold, according to the timeline.

The boy was released just before 3 p.m., about 90 minutes after he had been found to have a fever of 103 degrees Fahrenheit (39.4 Celsius), CBP said. He was prescribed the antibiotic amoxicillin and the pain reliever and fever-reducer ibuprofen, and was taken with his father to a holding facility at a highway checkpoint.

The agency said that its officers repeatedly conducted welfare checks on Felipe and his father, and that agents decided to take the boy back to the hospital at about 10 p.m. because the boy “appeared lethargic and nauseous again.”

CBP typically detains adult immigrants for no more than a few days when they cross the border before either releasing them or turning them over to U.S. Immigration and Customs Enforcement for longer-term detention.

Agency guidelines say immigrants generally shouldn’t be detained for more than 72 hours in CBP holding facilities, which are usually smaller and have fewer services than ICE detention centers.