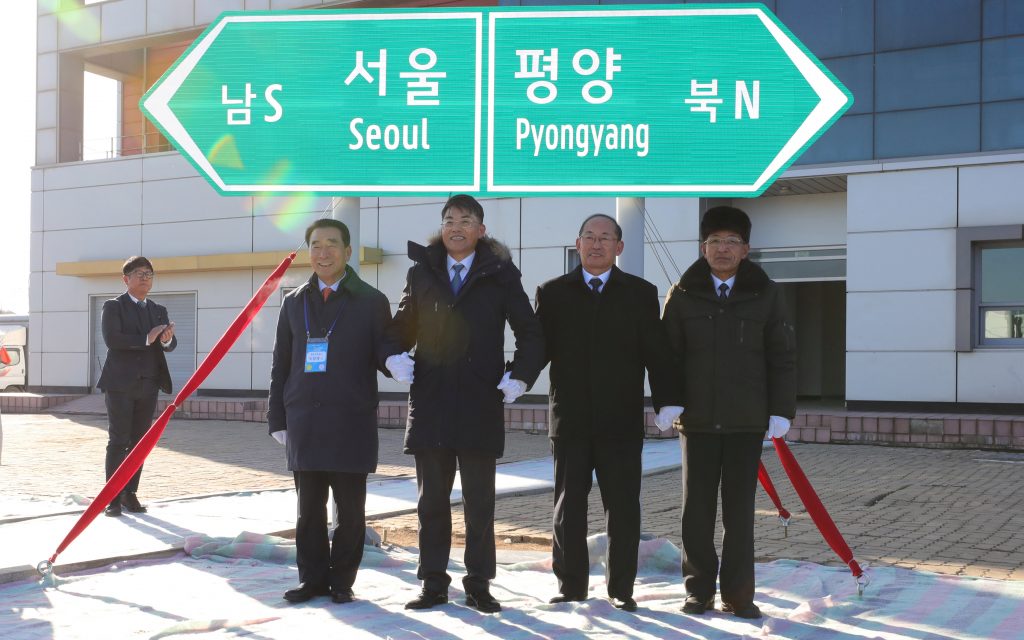 The two Koreas on Wednesday launched a project to reconnect rail and road links severed since the 1950-53 Korean War, but actual construction cannot start while sanctions remain in place against North Korea, officials said.

The two sides agreed in October to work on reconnecting railways and roads as part of a thaw in relations that the United States fears will undermine efforts to press North Korea to give up its nuclear weapons.

“There’s a lot of things to do before we actually start construction,” South Korean Transport Minister Kim Hyun-mee said before the ceremony in the city of Kaesong on the North Korean side of the border.

The materials and investment needed for construction to begin are banned under U.N. and U.S. sanctions imposed over Pyongyang’s nuclear and missile programs. Washington insists sanctions remain until the North gives up its nuclear weapons.

South Korean officials, politicians and members of families displaced by the war boarded a special train to the ceremony.

Shin Jang-chul, who drove the last freight train between the Koreas when they operated a joint factory park a decade ago, said he never thought he would return to the North.

“I’m just deeply moved,” Shin said. “It’s been 10 years and I’ve been wondering if I would ever be able to come back after I retire.”

They were joined by a North Korean delegation, as well as officials from the United Nations, China, Russia and Mongolia, according to South Korea’s Unification Ministry.

Speaking at the event, the North’s Vice Railroad Minister Kim Yun Hyok called for an “unwavering determination to stand against headwinds” that could threaten the project.

“The results of the rail and road project hinge on the spirit and will of our people,” Kim said.

The two sides will conduct additional joint surveys and design work that could take one or two years to complete, the South’s Kim Hyun-mee said.

Wednesday’s ceremony was another example of the thaw in relations between the Koreas, technically still at war after their conflict ended in a truce, not a peace treaty.

But major economic initiatives have yet to take off amid the lack of progress on denuclearizing the North.

North Korean leader Kim Jong Un agreed to work toward denuclearization at a summit with President Donald Trump in June. But negotiations have made little headway, with Pyongyang upset at Washington’s insistence that sanctions remain until the North takes concrete steps to give up its nuclear arsenal.

“The South is trying to build on existing agreements, believing that advancing inter-Korean ties would have a positive impact on denuclearization,” said Shin Beom-chul, a senior fellow at the Asan Institute for Policy Studies in Seoul.

“But given the absence of actual construction, the North will keep pressing the South to make it happen despite sanctions, in line with Kim’s efforts to shore up his regime,” he added.