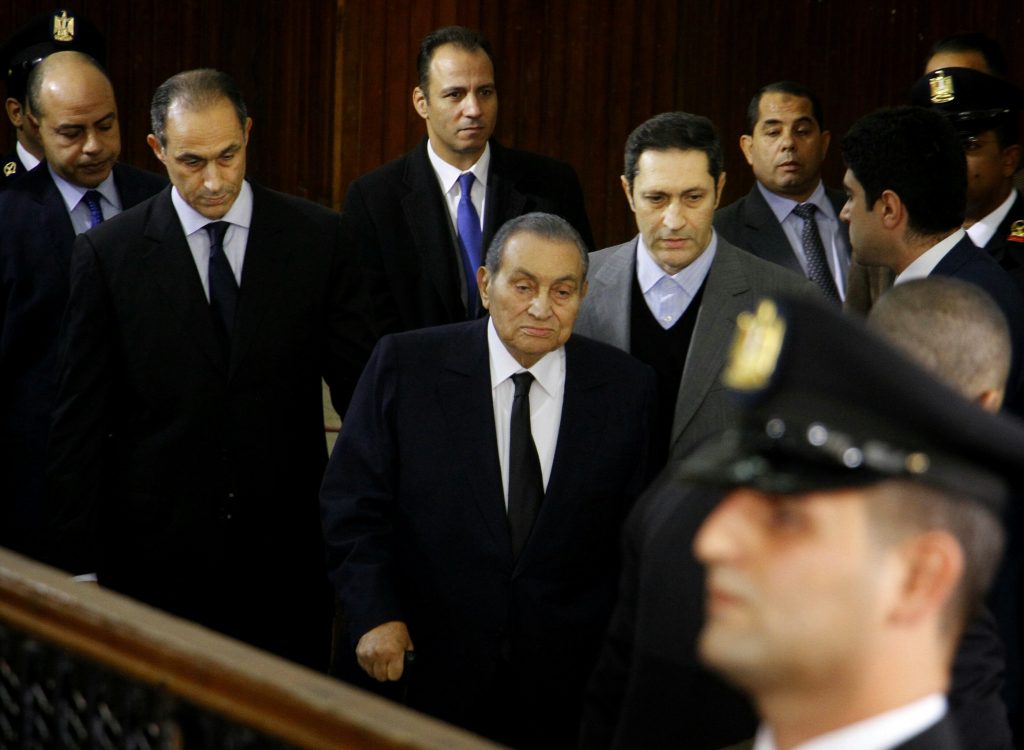 Two former Egyptian presidents appeared Wednesday in the same Cairo courtroom, with Hosni Mubarak testifying in a retrial of Mohammed Morsi on charges related to prison breaks at the height of the 2011 uprising that toppled Mubarak.

The 90-year-old Mubarak, whose nearly three-decade rule was ended by a popular uprising in 2011, entered courtroom with a cane along with his two sons Alaa and Gamal. He was wearing a dark blue suit and a matching tie. He appeared physically well and mentally sharp though his speech was slow at times. The chief judge, Mohammed Sherin, allowed Mubarak to take a seat while testifying.

The hearing took place amid heavy security in a police facility in a southern Cairo suburb.

Morsi, 67, and the Muslim Brotherhood swiftly rose to power in elections after Mubarak’s ouster, only to find themselves imprisoned a year later when millions protested against them for abuse of power, leading the military to overthrow the government.

The jailed former leader is involved in four lengthy trials in different cases, including on charges of undermining national security by conspiring with foreign groups and orchestrating a prison break.

Wednesday’s case is rooted in the 2011 escape of more than 20,000 inmates from Egyptian prisons — including Morsi and other Muslim Brotherhood members — during the early days of the 18-day uprising against Mubarak. Morsi and the other Brotherhood leaders escaped two days after they were detained as Mubarak’s security forces tried to undercut the planned protests.

At the time, authorities also cut off internet access and mobile phone networks, crippling communication among the protesters and with the outside world.

In June 2015, the Cairo Criminal Court issued sentences of death and life imprisonment against Morsi and other key figures of the Brotherhood. However, in November 2016, the Court of Cassation, Egypt’s final recourse for appeals in criminal cases, annulled the sentence and ordered a retrial of the defendants.

In two hours of testimony, Mubarak said Wednesday that former spy chief and vice president Omar Suleiman told him on Jan. 29, 2011, that at least 800 armed people crossed into the norther part of Sinai Peninsula, through tunnels from Gaza with help from the Muslim Brotherhood.

“They entered Egypt through Gaza and had weapons. … They headed toward the prisons to release prisoners belonging to Hezbollah, Hamas and the Muslim Brotherhood,” Mubarak said, referring to Lebanon’s Hezbollah terrorist group and Hamas terrorists who have ruled Gaza since 2007.

Mubarak refused to answer most questions, saying he needs permission from the military and President Abdel-Fattah el-Sissi, who led the military’s 2013 ouster of Morsi, Egypt’s first freely elected president. El-Sissi has since overseen a massive crackdown on Morsi’s supporters, jailing thousands of them along with secular activists behind the 2011 uprising.

“If I talk, I will open many subjects that I am barred from discussing without permission,” the former president said.

Mubarak was freed last year, ending nearly six years of legal proceedings against him. He was acquitted by the country’s top appeals court of charges that he ordered the killing of protesters during the 2011 uprising.

Mubarak has already served a three-year sentence for embezzling state funds in connection with the protesters’ case.

Morsi, who wore a blue jumpsuit, did not make use of the opportunity offered to defendants to question Mubarak. The chief judge adjourned the hearings until Jan. 24.