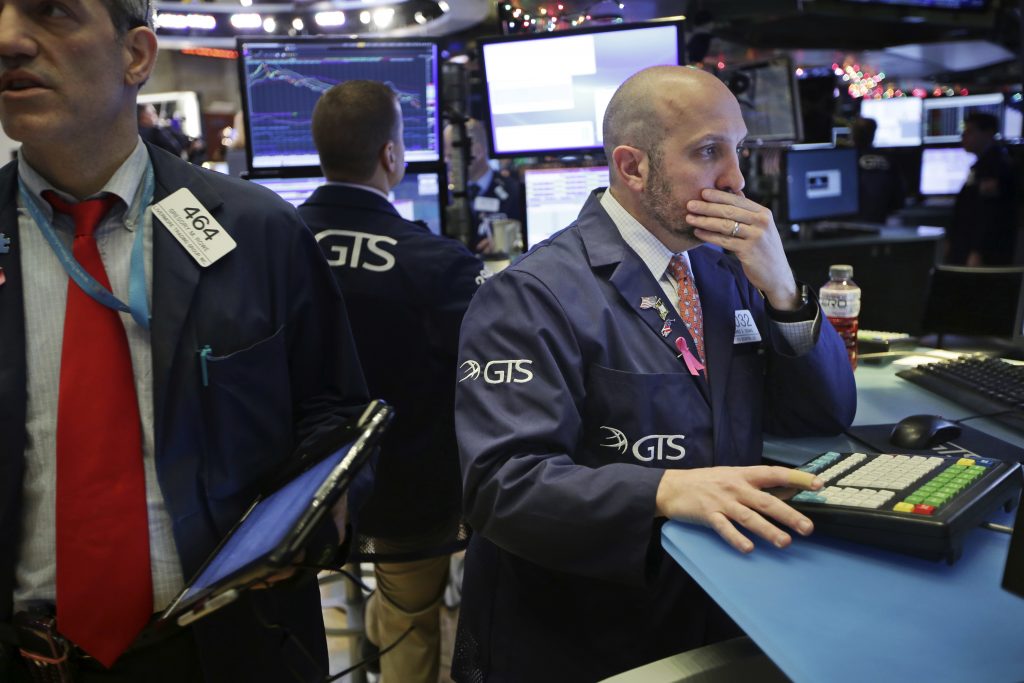 U.S. stocks fell sharply Monday, sending the Dow Jones Industrial Average down more than 400 points and extending the market’s losses after its worst week in more than seven years.

Health-care, technology and industrial stocks took some of the heaviest losses in the broad sell-off, which followed news that the U.S. Treasury Secretary called CEOs of six major banks Sunday in an apparent attempt to stabilize jittery markets.

Trading was choppy and volume was light during a shortened trading session ahead of the market holiday Tuesday.

“It’s already been a roller coaster today,” said Craig Birk, chief investment officer at Personal Capital. “There’s some repositioning going on, but it’s a light day and probably a lot of people are staying out of it.”

The major indexes are down 16 to 26 percent from their autumn highs. Barring huge gains during the upcoming holiday period, this will be the worst December for stocks since 1931.

The market briefly bounced back from its steep opening slide, then veered lower again around midmorning after President Donald Trump tweeted another volley of criticism at the Federal Reserve.

“The only problem our economy has is the Fed,” Trump tweeted. “They don’t have a feel for the Market, they don’t understand necessary Trade Wars or Strong Dollars or even Democrat Shutdowns over Borders. The Fed is like a powerful golfer who can’t score because he has no touch – he can’t putt!”

Trump has argued that the Fed is hindering the economy through its rate increases, which are intended to prevent inflation from rising too high.

Investors have grown jittery in recent weeks amid concern that U.S. economic growth will slow and hurt corporate profits. The rise in interest rates has helped stoke those worries. Traders have also fretted over the U.S.-China trade dispute and signs that economies in Europe and China are slowing.

Coming off a turbulent week of trading on Wall Street, Treasury Secretary Steven Mnuchin on Sunday disclosed calls with the heads of Bank of America, Citigroup, Goldman Sachs, JP Morgan Chase, Morgan Stanley and Wells Fargo. Mnuchin said the CEOs all assured him they have ample money to finance their normal operations, even though there haven’t been any serious liquidity concerns rattling the market. But the calls added to the underlying worries that have gripped markets of late.

Health-care and technology stocks accounted for a big share of the selling. Microsoft fell 2.2 percent to $96.05. Johnson & Johnson decreased 4 percent to $122.99.

Oil prices, which have sunk on concerns about the state of the global economy and also oversupply in the market, continued to slide. Benchmark U.S. crude fell 3.1 percent to $44.18 a barrel in New York. Brent crude, used to price international oils, declined 2.6 percent to $52.43 a barrel in London.

The decline in oil prices weighed on energy stocks. Hess slumped 8.1 percent to $38.11.