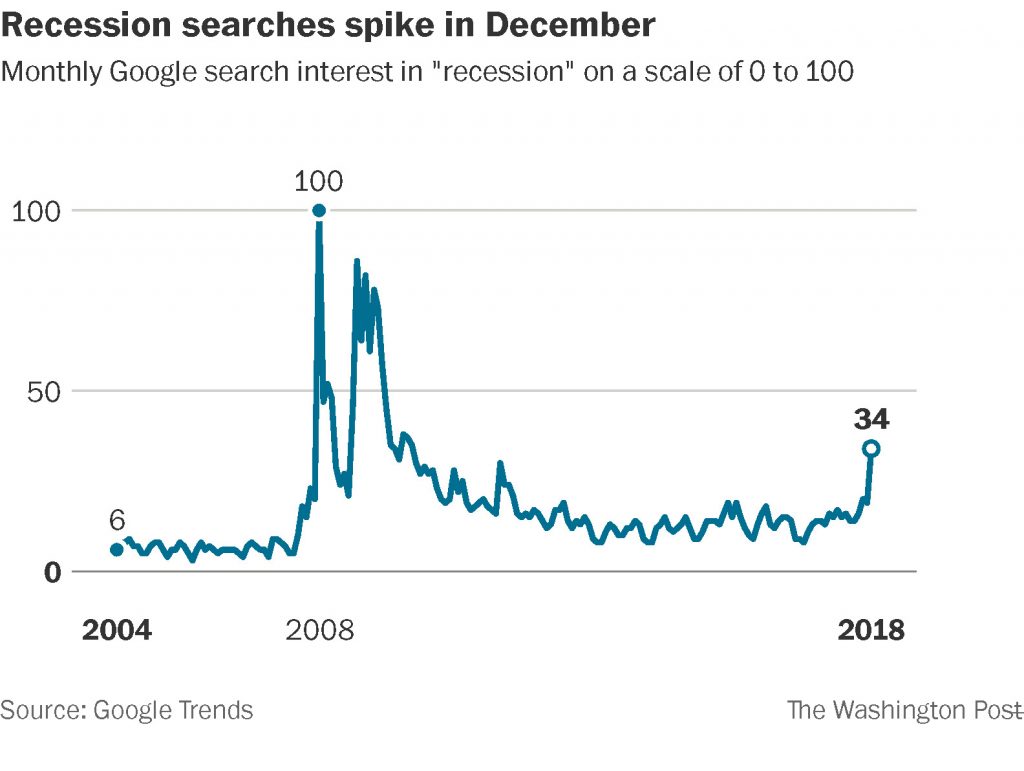 Recent market turmoil, driven in part by the ongoing chaos in President Donald Trump’s White House, has many analysts wondering if another recession is on the horizon.

It’s not just the financial pros who are worried: Data from Google shows that searches for “recession” are currently at their highest level since November of 2009, just a few months after the end of the so-called Great Recession.

Google’s data shows the overall volume of searches for a given topic, relative to its peak. In the case of “recession,” searches peaked in January 2008, just after the start of the last recession. If recession searches in January 2008 were a 100, searches in December of this year have so far topped out a 34. That means current interest in “recession” as a topic is about one-third of what it was in January 2008. The last time there were this many searches was in November 2009, which scored a 35.

The trend line above shows small spikes in recession searches in 2010 and 2011. Those were driven primarily by fears in the early Obama years of a double dip recession that fortunately never materialized. The current volume of recession searches is greater than it was at either of those two points.

It’s worth pointing out that December isn’t over yet, so this month’s figures are subject to change upward or downward, depending on what happens between now and the end of the year.

Google also provides information on related search queries, which gives us a sense of what else people are looking for when they search for recession information. As of this moment, “Steven Mnuchin” is one of the fastest-rising recession-related search terms over the past seven days, owing to the unusual statement on the health of the financial system the Treasury Secretary issued Sunday. “Bear market,” “fb [Facebook] stock,” and “fed rate hike” are some of the other fast-rising related terms.

If there’s one bright spot in the Google data it’s this: In absolute terms, the overall number of searches remains relatively small.