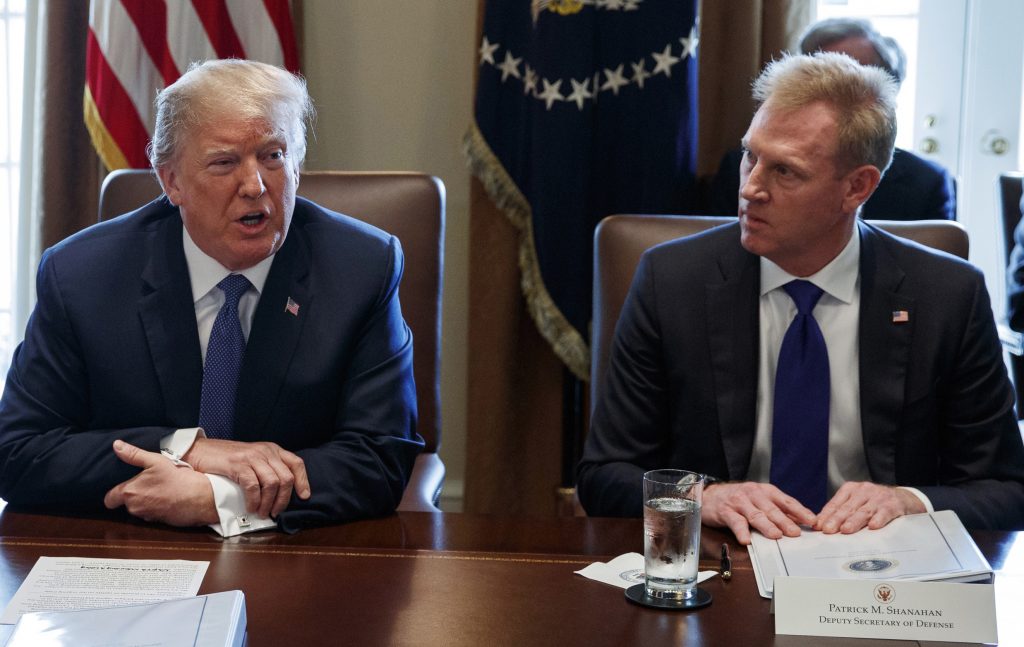 The sooner-than-expected departure of Defense Secretary Jim Mattis shifts the focus to President Donald Trump’s appointment of an acting Pentagon chief and plans for a permanent replacement.

It also signals an acrimonious end to a tense relationship between Trump and Mattis that had eroded in recent months. A fracture developed last week over Trump’s decision to withdraw U.S. troops from Syria and worsened after Mattis’ public disagreement with Trump, aired in his resignation letter.

Mattis made clear in the letter he did not see eye to eye with a president who has expressed disdain for NATO. That drew a critical tweet from Trump on Monday.

“We are substantially subsidizing the Militaries of many VERY rich countries all over the world, while at the same time these countries take total advantage of the U.S., and our TAXPAYERS, on Trade,” Trump tweeted Monday. “General Mattis did not see this as a problem. I DO, and it is being fixed!”

Deputy Defense Secretary Patrick Shanahan will take over as acting secretary on Jan. 1, Trump announced in a tweet Sunday. He had worked for more than three decades at Boeing Co. and was a senior vice president when he became Pentagon deputy in July 2017.

In the new year, President Trump wants to focus on streamlining purchases at the Pentagon, an issue on which Shanahan has already been working, a White House official said. The official asked not to be identified publicly discussing personnel matters.

U.S. officials said they didn’t know if Shanahan would be Trump’s nominee to replace Mattis. During a lunch with conservative lawmakers Saturday at the White House, Trump discussed his options. They were “not all military,” said Sen. Lindsey Graham, R-S.C., who was among those attending.

Shanahan’s biography on the Pentagon’s website does not list military experience for the longtime Boeing executive. He earned a bachelor’s degree in mechanical engineering from the University of Washington, then a master’s degree in mechanical engineering, as well as an MBA from the Sloan School of Management at the Massachusetts Institute of Technology.

In addition to work in Boeing’s commercial airplanes programs, Shanahan was vice president and general manager of Boeing Missile Defense Systems and of Boeing Rotorcraft Systems. In a March 2016 report, the Puget Sound Business Journal called Shanahan a Boeing “fix-it” man who was central to getting the 787 Dreamliner on track after production problems in the program’s early years.

An acting defense secretary is highly unusual. Historically when a secretary has resigned, he has stayed on until a successor is confirmed. For example, when Chuck Hagel was told to resign in November 2014, he stayed in office until Ash Carter was confirmed the following February.

Mattis, a retired Marine Corps general, had been expected to retain his position as Pentagon chief through February. Secretary of State Mike Pompeo, not the president, notified Mattis of Trump’s decision to put in place Shanahan, said a senior administration official who insisted on anonymity to discuss personnel issues.

The sudden change stripped Mattis of any chance to further frame national security policy or smooth rattled relations with allies over the next two months. But U.S. officials said the reaction to Mattis’ decision to leave — it sparked shock and dismay on Capitol Hill — annoyed Trump and likely led to pushing Mattis out.

“When President Obama ingloriously fired Jim Mattis, I gave him a second chance. Some thought I shouldn’t, I thought I should,” Trump tweeted Saturday, foreshadowing his displeasure and the Sunday announcement. He also fumed over the media coverage of his Syria withdrawal order, suggesting he should be popular for bringing troops home.

“With me, hit hard instead by the Fake News Media. Crazy!” Trump tweeted.

A White House official said Trump decided Mattis should leave the administration earlier than planned to avoid a drawn-out transition when someone is on hand whom they consider a qualified deputy capable of running the Pentagon in an acting capacity. The official asked not to be identified publicly discussing personnel matters.

While Mattis’ resignation followed Trump’s announcement that he would soon pull all of the approximately 2,000 U.S. troops out of Syria, officials said that the decision was the result of an accumulation of disagreements. Mattis was also unhappy with Trump’s order to develop plans to pull out up to half of the 14,000 U.S. forces in Afghanistan.

Earlier Sunday, Trump’s acting chief of staff said that Trump had known for “quite some time now” that he and Mattis “did not share some of the same philosophies … have the same world view.”

Mick Mulvaney told that the president and his defense chief “just could never get on the same page” on Syria, adding that Trump had said since his presidential campaign that “he wanted to get out of Syria.” Mulvaney said the president “is entitled to have a secretary of defense who is committed to that same end.”

Asked whether President Trump wanted a Pentagon leader willing to challenge him or someone in lock step with his views, Mulvaney said “a little bit of both.”

“I’ve encouraged him to find people who have some overlap with him but don’t see the world in lockstep with him,” Mulvaney said.

Meanwhile, Senate Majority Leader Mitch McConnell, R-Ky., joined leading Republicans on foreign affairs in urging Trump to reconsider his decision to withdraw American forces from Syria and called it “a premature and costly mistake.” They asked Trump to withhold a final decision for 90 days to allow time to study the impact of the decision, but Mulvaney told ABC that Trump wouldn’t change his mind.

Just after tweeting the announcement about Shanahan, Trump said he had had “a long and productive call” with Turkey’s president, Recep Tayyip Erdogan. President Trump said they discussed IS, “our mutual involvement in Syria, & the slow & highly coordinated pullout of U.S. troops from the area. After many years they are coming home.”