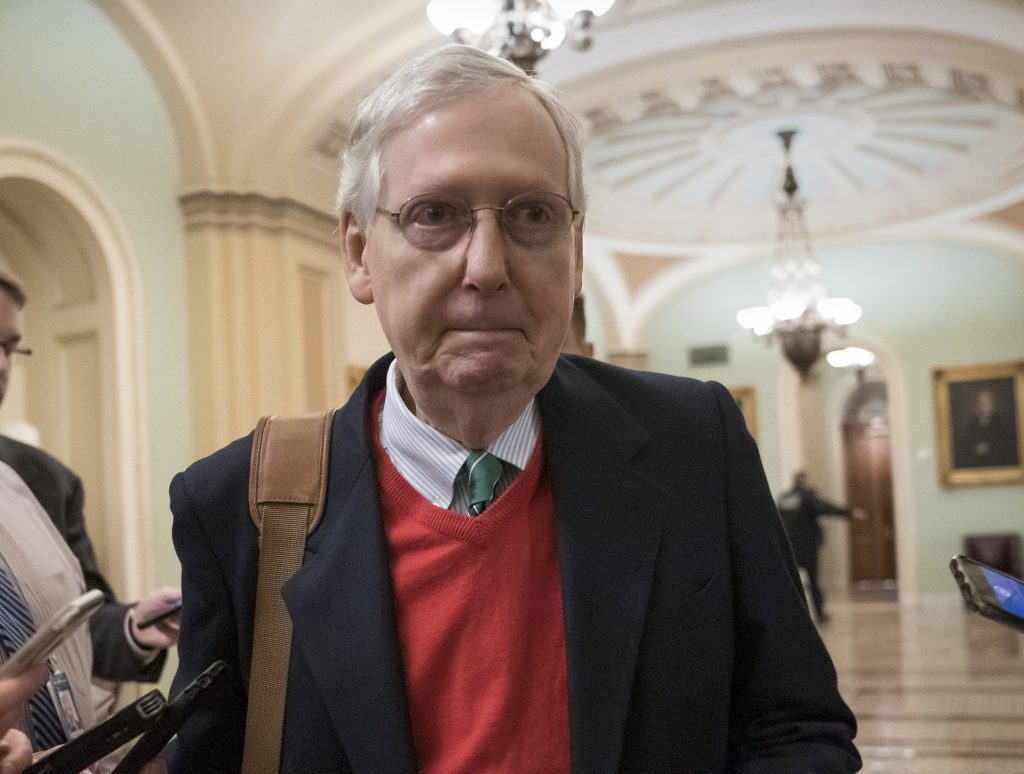 A top White House official signaled Sunday that President Donald Trump is willing to accept less money than he’s been demanding to build a U.S.-Mexico border wall, but a senior congressional Democrat said that, while their own offer could be sweetened, they still will not agree to a wall.

The back and forth across the media did little to inspire hope that an end of year closure of some federal government operations would end later this week, when the House and Senate are scheduled to meet again.

In fact, acting White House chief of staff Mick Mulvaney warned that the shutdown could stretch into January, when a new Congress is seated.

Mulvaney, who also runs the White House budget office, said he’s awaiting a response from Senate Democratic leader Chuck Schumer of New York after the administration on Saturday presented Schumer with a counteroffer in the long-running dispute over funding the wall.

Mulvaney withheld specifics but placed the offer at between Trump’s $5.7 billion request and $1.3 billion Democrats are offering.

“We moved off of the five and we hope they move up from their 1.3,” Mulvaney said.

The director’s comment about the president’s softening stance came less than 24 hours after a senior administration official insisted to reporters on Saturday that Congress give into Trump’s demands, highlighting the unpredictable nature of Trump’s negotiating style.

Sen. Dick Durbin, D-Ill., argued instead for increasing the use of technology along the border instead of building “some medieval wall.”

Asked whether he’s willing to increase the price tag as long as the money is not spent on a wall, Durbin responded: “Absolutely.”

A stalemate over the wall led parts of the government to shut down Saturday after funding for numerous departments and agencies expired. The closure, affecting hundreds of thousands of federal workers across the country, was expected to last at least through late this week after the House and Senate, which each met in a rare weekend session, adjourned until Thursday.

Monday and Tuesday are federal holidays, meaning the federal government would already be closed. Wednesday is the first day the public could begin to feel the effects of a shutdown, Mulvaney said.

He predicted it could extend into January, when Democrats will assume control of the House based on their midterm election gains.

“It’s very possible that this shutdown will go beyond the 28th and into the new Congress,” Mulvaney said.

Justin Goodman, a spokesman for Schumer, countered: “If Director Mulvaney says the Trump Shutdown will last into the New Year, believe him, because it’s their shutdown.”

Trump faced resistance from some Republicans. Retiring Sen. Bob Corker of Tennessee, who has criticized Trump on other issues, called the battle for border wall funding a “made-up fight so the president can look like he’s fighting.”

“This is something that is unnecessary. It’s a spectacle. And, candidly, it’s juvenile. The whole thing is juvenile,” Corker said in arguing for real measures that he maintains will secure the border better than a wall.

Trump tweeted Sunday, the shutdown’s second day, that what’s needed is “a good old fashioned WALL that works,” not aerial drones or other measures that “are wonderful and lots of fun” but not the answer to address illegal substances, gangs, human trafficking and other criminal elements entering the country.

Across the country, the shutdown played out in uneven ways. The Statue of Liberty remained open for tours, thanks to New York state, and the U.S. Postal Service, an independent agency, was still delivering mail.

But the routines of 800,000 federal employees were about to be disrupted. More than half are deemed essential and are expected to work without pay, through retroactive pay is expected. Another 380,000 were to be furloughed, meaning they will not report to work but would be paid later. Legislation ensuring that workers receive back pay was expected to clear Congress.

With Democrats set to take control of the House on Jan. 3, and House Speaker Paul Ryan, R-Wis., retiring from Congress, the shutdown provided a last gasp for the conservative majority before the new Congress.

Trump had savored the prospect of a shutdown over the wall. He recently said he’d be “proud” to close down the government and has gone back on his pledge not to blame Democrats for the closure.

Schumer and Vice President Mike Pence met Saturday at the request of the White House, according to Schumer’s office. But the senator’s spokesman said they remained “very far apart” on a spending agreement.

Schumer said the “Trump shutdown” could end immediately if the president abandons the wall.

Democrats said they were open to proposals that didn’t include the wall, which Schumer said was too costly and ineffective. They have offered to keep spending at existing levels of $1.3 billion for border fencing and other security.

Senators approved a bipartisan deal earlier in the week to keep the government open into February and provide $1.3 billion for border security projects, but not the wall. But as Trump faced criticism from conservatives for “caving” on a campaign promise, he pushed the House to approve a package temporarily financing the government but also setting aside $5.7 billion for the border wall.

The impasse blocked money for nine of 15 Cabinet-level departments and dozens of agencies, including Homeland Security, Transportation, Interior, Agriculture, State and Justice.

Those being furloughed included nearly everyone at NASA and 52,000 workers at the Internal Revenue Service. Many national parks were expected to close.

The Pentagon and the departments of Veterans Affairs and Health and Human Services are among those that Congress has fully funded and will operate as usual. Also still functioning were the FBI, the Border Patrol and the Coast Guard.