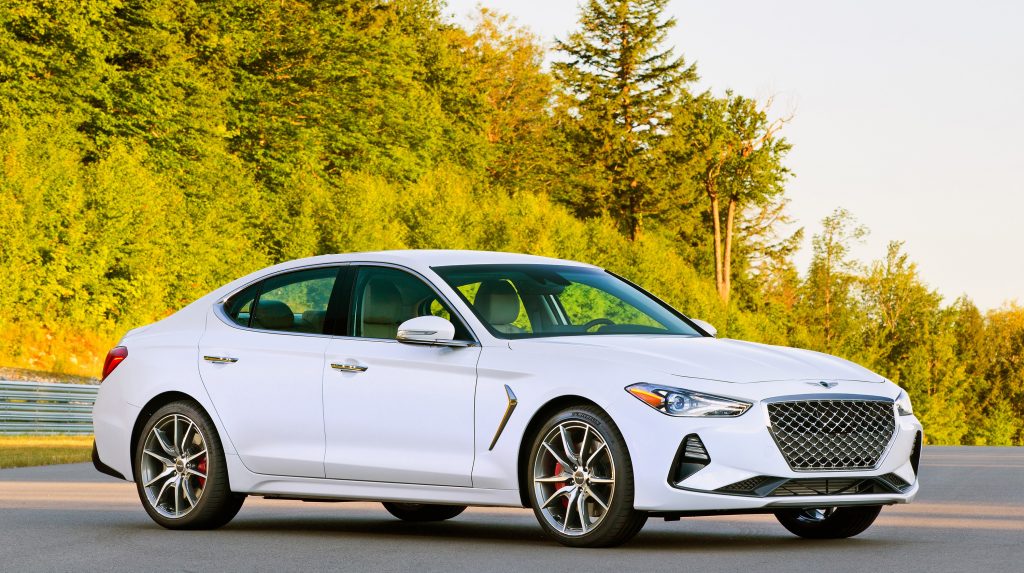 After the third drive in the excellent all-new 2019 Genesis G70 compact sedan, a memory from the 2016 Chicago Auto Show floor returned. Overheard was one fellow saying to another fellow, “There’s Hyundai.” And the other guy scoffed and said, “Why bother,” as if it were 30 years earlier when the South Korean automaker broke into the American market with the low-quality, budget Excel. I wanted to tell him how much Hyundai had evolved, but he was confident in his ignorant opinion.

And he must not have made the connection when, later on the show floor, he and almost everyone else was gawking at the automaker’s stunning concept: the Genesis Vision G luxury coupe.

There was a lot of skepticism then about Hyundai launching a distinct luxury brand, as Honda had done with Acura, Nissan with Infiniti and Toyota with Lexus. It takes a long time to correct that skepticism. Roughly three years in with a third model out, the Genesis G70 compact sedan announces without a doubt that the Genesis brand makes very good cars.

Unfortunately, for now, Hyundai doesn’t make a crossover, but another one of those is the last thing the market needs. Yet the market doesn’t really want cars, either, so the G90 full-size sedan and G80 midsize sedan probably didn’t worry the established premium and luxury automakers.

As long as there is a 3-Series, there will be a market for sporty compact sedans that crossovers can’t touch. The G70 hits all the right marks, with handling that makes you smile, and acceleration that makes you forget any worries you may be escaping or approaching. And, in a direct shot at the Germans and all the other luxury players, the options are streamlined into simple, loaded packages.

Genesis knows everything has to be well-executed to turn consumers away from the established luxury players, so the little things matter.

Take this particular small thing that charmed every passenger, from retiree to grade-schooler. On the inside part of the passenger’s seat, above and across the center console, are two buttons to slide the seat forward, or fold the seatback. The driver or the rear seat passenger can press it without much effort. It gets people — and especially kids — in and out of the rear seat easier without scuffing that beautiful white quilted interior trim. But it also lets the driver move the seat back when picking up larger passengers. It’s such a small thing, but such a lovely convenience.

The G70 looks sharp without trying too hard to stand out. A broad honeycomb grille complements the long hood and short overhangs for a low, muscular profile. The high beltline and coupelike roofline nip some headroom in the rear seats for the sake of dynamic design. In short, the car looks good, and you’ll look good getting in and out of it.

Genesis carries what it calls “athletic elegance” into the inside. Quilted nappa leather seats and door panels blend with the brushed aluminum trim pieces to create a sophisticated cabin that isn’t ostentatious. The only Hyundai family resemblance is the infotainment system, which is simple to use and not overburdened with submenus. This easy-to-use effectiveness applies to high-fidelity voice commands and advanced driver assistance systems including adaptive cruise control and lane keep assist.

The real charm is behind the wheel. The 365-horsepower 3.3-liter twin turbo V-6 with a smooth, eight-speed automatic (six-speed manual is optional on four-cylinder rear-wheel drive) in all-wheel drive packs a potent and efficient punch. The various drive modes from eco to sport adjust throttle response, so it doesn’t take much to floor it in sport mode and hit 60 mph in 4.5 seconds, according to Genesis. It’s essentially the same powertrain as the larger, heavier Kia Stinger.

Turbo lag is minimal, steering is direct and the G70 soaks up the road while still staying close to it. There’s no lean but plenty of mean in the G70 with Prestige trim.

The question is whether it exceeds the class benchmark, the BMW 3-Series. The new M340i is a tad quicker but expected to be about $10,000 more. But whatever the case, if you’re in the market for a luxury sport sedan, checking out the G70 is worth your while. Don’t be that guy hung up on dated misconceptions.