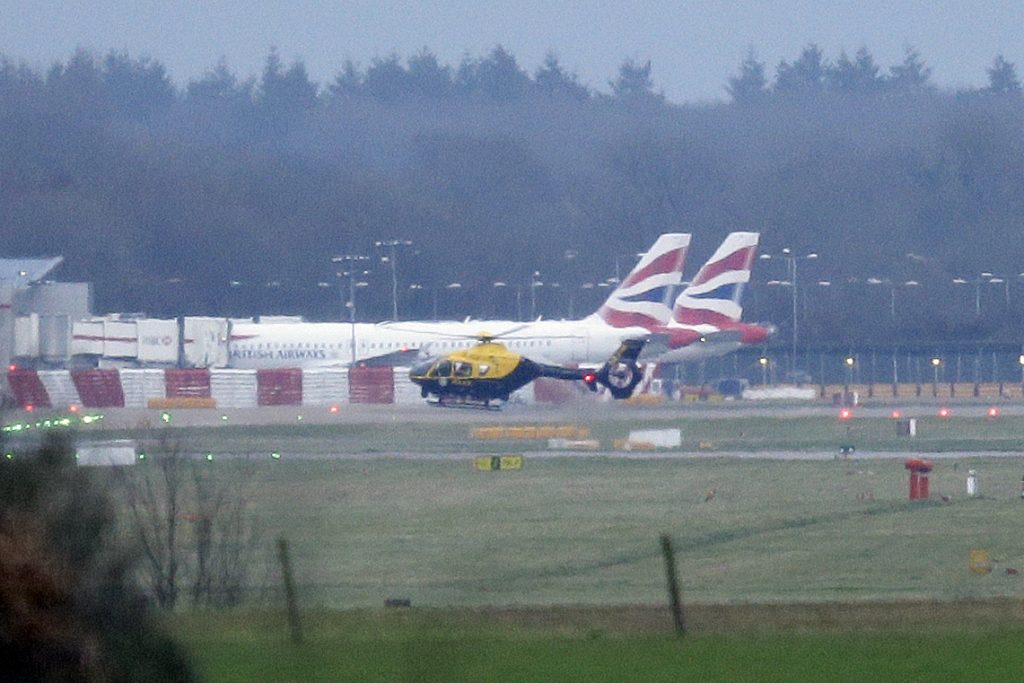 When drones buzzing over the runway forced London’s busy Gatwick Airport to shut down, many travelers wondered why it’s so hard for authorities to stop such intruders.

Shoot them down, some said. Jam their signals, others suggested.

Experts say it’s not that easy.

Britain and the U.S. prohibit drones from being flown too high or too close to airports and other aircraft. In Britain, it is a crime punishable by up to five years in prison.

Still, there is little to stop a drone operator bent on disrupting air traffic, which British officials say was the case with the Gatwick incident that began Wednesday evening.

The number of close calls between drones and aircraft has increased dramatically in recent years as the popularity of drones has soared. Basic models for amateurs sell for under $100; larger, more sophisticated ones can cost hundreds more.

Britain had 120 reports of close encounters in 2018, up from 93 last year. In 2014, there were six, according to the U.K. Airprox Board, which catalogs air safety incidents.

In the United States, there were nearly 2,300 drone sightings at airports in the year ending June 30, according to Federal Aviation Administration records. Runways have been temporarily closed, but an FAA spokesman said he could not recall drones ever leading to the shutdown of a U.S. airport.

A drone hit a small charter plane in Canada in 2017; it landed safely. In another incident that same year, a drone struck a U.S. Army helicopter in New York but caused only minor damage.

“This has gone from being what a few years ago what we would have called an emerging threat to a more active threat,” said Patrick Smith, an airline pilot and author of askthepilot. “The hardware is getting bigger and heavier and potentially more lethal, and so we need a way to control how these devices are used and under what rules.”

Even small drones could cause severe consequences by damaging a helicopter’s rotor or getting sucked into a jet engine. A drone could also crash through a windshield, incapacitating the pilot, though that’s mainly seen as a risk to small aircraft.

“On an airliner, because of the thickness of the glass, I think it’s pretty unlikely, unless it’s a very large drone,” said John Cox, a former airline pilot and now a safety consultant.

Drones that collide with planes could cause more damage than birds of the same size because of their solid motors, batteries and other parts, according to a study released by the FAA.

Authorities could capture drones with anti-drone “net guns” that fire lightweight netting, but such equipment can be pricey and have limited range; it is not widely used.

As for taking one down with a rifle, hitting a small, fast-moving object like a drone would be difficult even for a marksman, and the bullet could hit someone, experts say. There’s also the risk of damage or injury from a falling drone.

Jamming systems could disrupt the signals between drone and operator, but that could interfere with the many vital communication systems in use at an airport, said Marc Wagner, CEO of Switzerland-based Drone Detection Sys.

Local laws might also prevent the use of such electronic countermeasures. Wagner said it is OK in Switzerland to use jamming systems, while Britain and the U.S. prohibit them.

Dutch police experimented with using eagles to swoop down on drones and pluck them out of the sky over airports or large events, but ended the program last year, reportedly because the birds didn’t always follow orders.

“The only method is to find the pilot and to send someone to the pilot to stop him,” Wagner said.

That can be done with frequency spectrum analyzers that can triangulate the drone operator’s position, but “the technology is new and it’s not commonly used,” said Wagner, whose company sells such gear and other counter-drone technology, including radar, jammers and powerful cameras.

China’s DJI Ltd., the world’s biggest manufacturer of commercial drones, and some other makers use GPS-based “geofencing” to automatically prevent drones from flying over airports and other sensitive locations, though the feature is easy to get around.

DJI also introduced a feature last year that allows authorities to identify and monitor its drones. It wasn’t clear what brand was used in the Gatwick incident.

British authorities are planning to tighten regulations by requiring drone users to register, which could make it easier to identify the pilot. U.S. law already requires users to register their drones and get certified as pilots.

But Wagner warned: “If somebody wants to do something really bad, he will never register.”