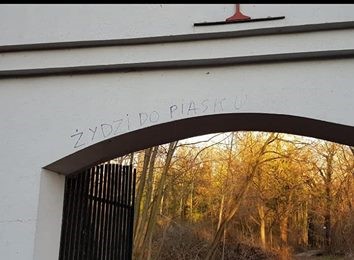 “Any act of vandalism against any cemetery is wrong and must be condemned. This most recent desecration of the Jewish cemetery in Czestochowa is painful and a strong reminder on how we need to find a comprehensive plan to preserve and restore our Jewish cemeteries. I have spoken to the Mayor of Czestochowa, Krzysztof Matyjaszczyk, and he too is concerned about the future of the Jewish cemetery. He is a very sensitive person and I am sure that we together, all good people of good will, can find a wise and practical solution so that such desecrations will never happen again”

Here is a news summary about the hate crime: 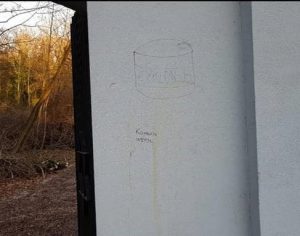 On December 13, police in Czestochowa in Southern Poland were informed about the vandalism and anti-Semitic graffiti and opened an investigation. Scrawled on the gate of the cemetery was “Jews to the Sand” and “cyclone B,” referring to the Zyklon B gas used to kill Jews in Nazi death camps,A sign with information about the cemetery, funded by philanthropist Zygmunt Rolat, who was born in Czestochowa and survived the Holocaust in the Czestochowa Ghetto, was also pulled down.

“For Czestochowa, these inscriptions are a disgrace and another manifestation of anti-Semitism. Authorities have the duty to combat such behavior,” local councilor Jolanta Urbańska told the Gazeta Wyborcza newspaper.

It is not the first time this year that city employees have had to paint over anti-Semitic graffiti at the cemetery. No safeguards have yet been put into place to prevent another occurrence.

In Aug. 2007, about 100 gravestones were found smeared with Nazi symbols and slogans. Then Polish president Lech Kaczynski condemned the desecration of a Jewish cemetery, calling it an “act of hate” against both Jews and Poles.

Before World War II, Jews constituted about 30 percent of the inhabitants of Czestochowa. In 1937, as a result of the activities of Polish nationalists, there was a three-day pogrom against the Jews, during which dozens of shops and apartments were demolished and the local synagogue set on fire. The Nazis created a ghetto there in 1941, which housed over 40,000 Jews. Most of them were murdered in the ghetto or in Treblinka.