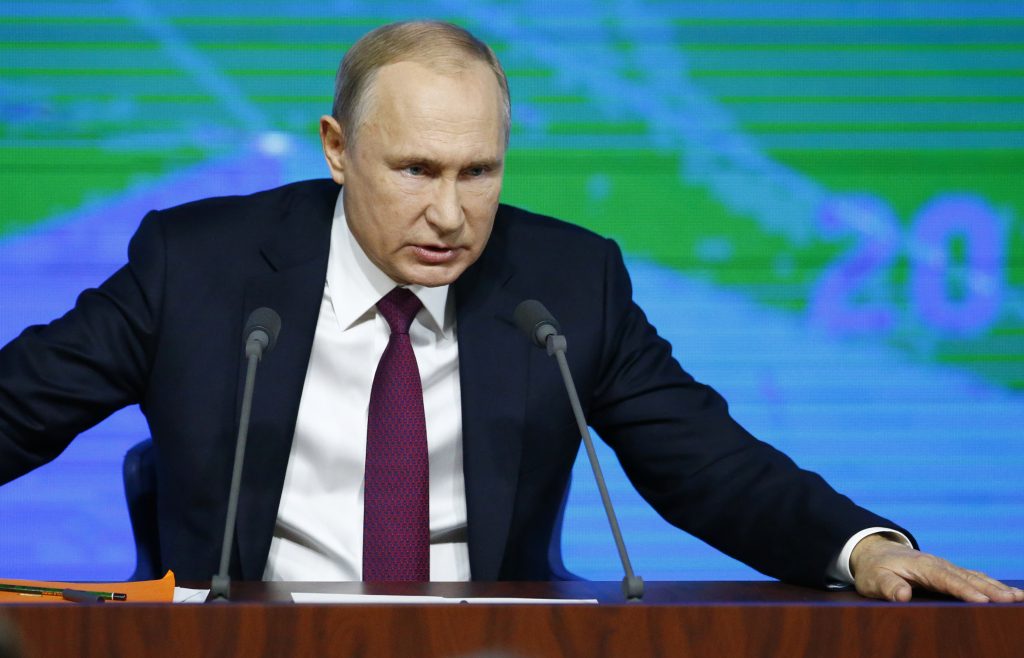 Russian President Vladimir Putin issued a chilling warning Thursday about the rising threat of a nuclear war, saying “it could lead to the destruction of civilization as a whole and maybe even our planet.”

Speaking at his annual news conference, Putin pointed at the U.S. intention to withdraw from the 1987 Intermediate-Range Nuclear Forces, or INF, Treaty. He said that if the U.S. puts intermediate-range missiles in Europe, Russia will be forced to take countermeasures.

“We are witnessing the breakup of the arms control system,” Putin said, noting the U.S. plan to opt out of the INF Treaty and its reluctance to negotiate the extension of the New START agreement.

Putin also emphasized that the U.S. is pondering the use of ballistic missiles with conventional warheads, saying that the launch of such a missile could be mistaken for the launch of a nuclear-tipped one and trigger a global catastrophe.

“If that happens, it could lead to the destruction of the entire civilization and maybe even our planet,” he said.

Putin also noted that the U.S. appears to show little interest in extending the New START nuclear arms reduction treaty, which expires in 2021. “You aren’t interested, you don’t need it? Okay, we know how to ensure our security,” he said.

On the economy, Putin hailed another year of Russian growth after a previous period of stagnation. Russia’s gross domestic product is set to grow by 1.8 percent this year, while industrial output has grown faster at 3 percent, he said.

The Russian president noted that the nation’s hard currency reserves have increased from $432 billion at the start of the year to $464 billion now. The positive statistics follow a difficult period in recent years when Russia’s economy suffered a combined blow of low oil prices and Western sanctions.

Putin pledged that the government will create incentives to speed up growth.