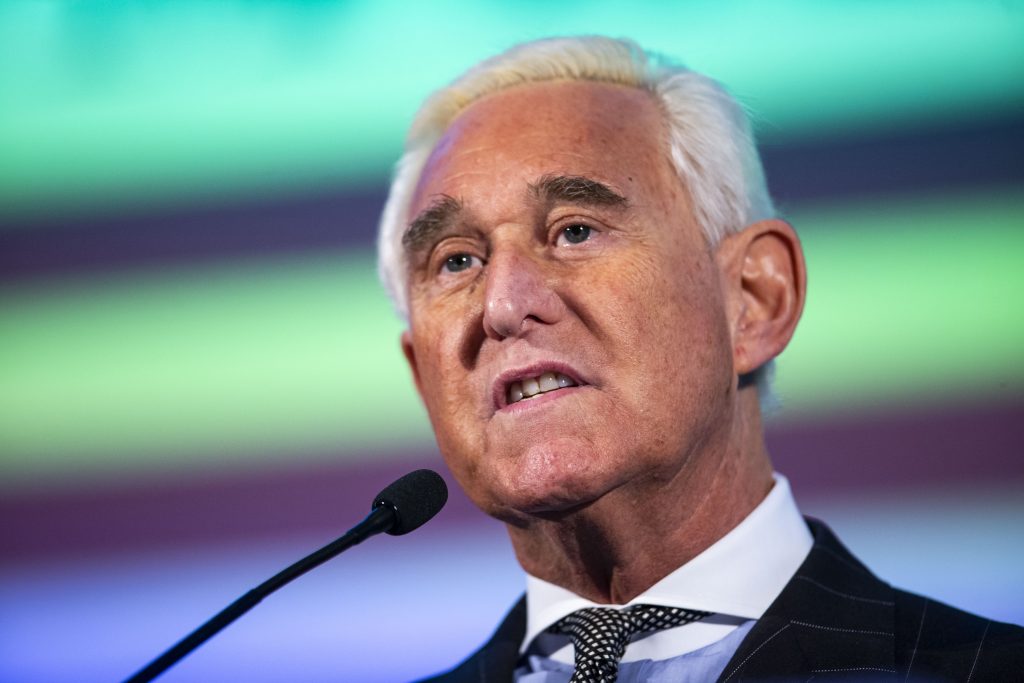 Special Counsel Robert Mueller asked the House Intelligence Committee on Friday for an official transcript of Trump adviser Roger Stone’s testimony, according to people familiar with the request, a sign that prosecutors could be moving to charge him with a crime.

It is the first time Mueller has formally asked the committee to turn over material the panel has gathered in its investigation of Russian interference of the 2016 campaign, according to the people.

The move suggests that the special counsel is moving to finalize his months-long investigation of Stone — a key part of Mueller’s inquiry into whether anyone in President Donald Trump’s orbit coordinated with the Russians.

Stone, who has advised Trump on and off for decades and was in contact with the candidate during the 2016 campaign, has been a focus of the special counsel as Mueller probes whether the Trump campaign had advance knowledge of Wikileaks’ release of Democratic emails allegedly hacked by Russian operatives.

Securing an official transcript from the committee would be a necessary step before pursuing an indictment that Stone allegedly lied to lawmakers, legal experts said.

The special counsel could use the threat of a false-statement charge to seek cooperation from Stone, as Mueller has done with other Trump advisers, such as former national security adviser Michael Flynn and longtime Trump lawyer Michael Cohen.

It is unclear what aspect of Stone’s testimony Mueller is scrutinizing. But Stone has given conflicting accounts about what prompted him to accurately predict during the 2016 race that WikiLeaks was going to unleash material that would hurt Democratic presidential nominee Hillary Clinton.

In an interview Wednesday, Stone said he had not been notified of Mueller’s request. But he said he is confident that the transcript of his testimony will not provide the special counsel with grounds to charge him.

“I don’t think any reasonable attorney who looks at it would conclude that I committed perjury, which requires intent and materiality,” Stone said.

“That suggests prosecutors are getting ready to bring a charge,” said former federal prosecutor Glenn Kirschner. “Prosecutors can’t bring a charge without an original certified copy of the transcript that shows the witness lied.”

The House Intelligence Committee, which has provided testimony of its witnesses to the Office of the Director of National Intelligence for a declassification review, has not yet turned over the official Stone transcript to Mueller, according to the people with knowledge of the situation.

The committee is expected to discuss the topic at a closed-door business session scheduled for Thursday, according to one person familiar with committee plans. An agenda for the meeting posted online shows the panel’s first item to consider is the “Transmission of Certain Executive Session Materials to the Executive Branch.”

The committee’s incoming chairman, Rep. Adam Schiff )D-Calif.), who takes over from Rep. Devin Nunes (R-Calif.) next month, has made it clear that he believes the committee should provide the special counsel with the Stone document.

“I believe that there’s ample reason to be concerned about his truthfulness, ” Schiff said Sunday on NBC News’ “Meet the Press.” “And I do think that with respect to Mr. Stone, and perhaps others, the special counsel is in a better position to determine the truth or falsity of that testimony, and that we ought to provide it to the special counsel.”

“This has devolved into gotcha word games, perjury traps and trumped-up process crimes,” he said Wednesday. “I think people can see through the political motivations behind this.”

Stone added: “Where is the evidence of Russian collusion or WikiLeaks collaboration?”

Mueller has spent months investigating whether Stone knew of WikiLeaks’ plan to release hacked Democratic emails in advance of the November 2016 election and whether he lied to Congress about his knowledge and his contacts with the group. In July, the special counsel charged a group of Russian intelligence officers with hacking the emails and providing them to WikiLeaks.

Stone, who boasted during the race that he was in touch with WikiLeaks founder Julian Assange, has said since that his past comments were exaggerated or misunderstood. Both he and WikiLeaks have adamantly denied they were in contact.

Several weeks ago, the House Intelligence Committee provided transcripts of its interviews with Stone and more than 50 other individuals to the Office of the Director of National Intelligence, which is conducting a declassification review before they are released publicly, according to congressional officials.

As part of that review, ODNI shares copies of the transcripts with other agencies, including the special counsel’s office, that might have an interest in protecting information in the interviews, officials said.

However, because the Stone interview was conducted in executive session, the transcript officially belongs to the committee and may not be released unless authorized by the committee, according to its rules.

In general, if prosecutors want to bring a charge of lying to investigators, they must obtain a certified “clean” copy from the transcriber or clerk who took the statement to present as an exhibit to a grand jury, legal experts said.

Charges of lying to Congress are relatively rare. But last month, Cohen pleaded guilty to such a charge as part of the special counsel probe.

Stone released written testimony he provided the House Intelligence Committee before his September 2017 interview in which he wrote that he had no “advanced knowledge of the source or actual content of the WikiLeaks disclosures regarding Hillary Clinton.”

He told the panel that he based some of his predictions on public information and tips from associates. He also said that he had an intermediary who provided him with information about WikiLeaks — but refused to name the person, indicating the person was a journalist with whom he had spoken off the record.

Shortly after his closed-door appearance, Stone wrote a letter to the committee saying he learned about WikiLeaks’ planned release from Randy Credico, a New York comedian who had interviewed Assange and is a longtime friend of New York attorney Margaret Ratner Kunstler, who has represented the group.

Credico has repeatedly denied passing any information from WikiLeaks to Stone. He said he may have speculated about the group’s tactics with Stone.

In recent weeks, Mueller’s prosecutors have been focused on another Stone associate who alerted him to an upcoming WikiLeaks release in 2016: conservative writer Jerome Corsi.

In an Aug. 2, 2016, email, Corsi wrote to Stone that the group planned to disclose emails that October that would embarrass Clinton, according to charging documents drafted by Mueller’s team and provided to The Washington Post.

“Word is friend in embassy plans 2 more dumps,” Corsi wrote in the email quoted in the draft document, referring to Assange, who has been living in the Ecuadoran Embassy in London since 2012. “One shortly after I’m back. 2nd in Oct. Impact planned to be very damaging.”

Corsi, who rejected a plea offer from the special counsel, said the email was based on his speculation of what WikiLeaks might be planning, not any inside knowledge.

The day after receiving the message from Corsi, Stone has said, he spoke with Trump by phone.

Stone has said he never discussed WikiLeaks or hacked emails with Trump. “Unless Mueller has tape recordings of the phone calls, what would that prove?” he told The Washington Post last month.

“The emails prove nothing,” Stone added, “other than like every other politico and political reporter in America, I was curious to know what it was that WikiLeaks had.”

Both Trump and Stone have decried the Mueller investigation as a “political witch hunt,” and Stone has said Mueller is applying intense pressure on his associates as a way of punishing him for supporting the president.

Over the past several months, Mueller’s investigators have interviewed a dozen Stone friends and associates, focusing on individuals who discussed WikiLeaks with Stone before to the election. Some have provided testimony and records that contradict Stone’s claims.

Charles Ortel, a Wall Street analyst and conservative writer, told The Post that he was interviewed in New York last week by two FBI agents who asked about his 2016 contacts with Stone, Corsi and Credico.

Ortel said the agents were interested in an email from then-Fox News reporter James Rosen that Ortel forwarded to Stone on July 25, 2016. In it, Rosen wrote, “Am told WikiLeaks will be doing a massive dump of HRC emails relating to the CF in September,” referring to Clinton and her family foundation.

Ortel declined to disclose the full details of his FBI interview but told The Post that he did not know where Rosen had gotten his information about WikiLeaks’ plans.

Rosen, who no longer works at Fox News, has repeatedly declined to comment.

In written questions posed to the president earlier this year, Mueller sought information from Trump about his interactions with Stone and whether they discussed WikiLeaks.

According to people familiar with Trump’s responses, the president said he had no prior knowledge of what the group was going to do and that Stone did not tell him about WikiLeaks’ plans.

“Did Roger Stone ever give the president a heads-up on WikiLeaks’ leaks concerning Hillary Clinton and the DNC?” ABC News’ George Stephanopoulos asked him Sunday.

“No, I don’t believe so,” Giuliani said. “But again, if Roger Stone gave anybody a heads-up about WikiLeaks’ leaks, that’s not a crime … collusion is not a crime.”