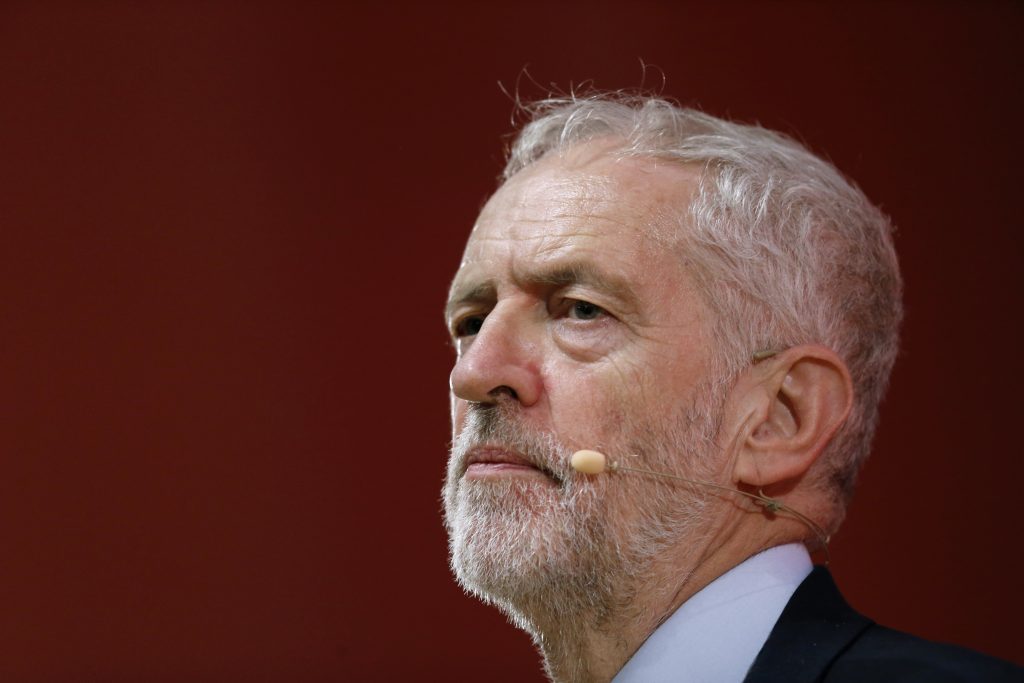 The leader of the U.K.’s main opposition party denied calling Prime Minister Theresa May a “stupid woman” on Wednesday as Britain’s Parliament descended into angry scenes of insult-slinging.

Labour Party leader Jeremy Corbyn was hauled back to the House of Commons to explain himself after he was caught on camera muttering a phrase under his breath. Members of May’s Conservative Party accused him of calling the premier a “stupid woman,” but the noise of the Commons chamber meant his words could not be heard in the video.

“I did not use the words ‘stupid woman’ about the prime minister or anyone else,” Corbyn told the Commons; he had said “stupid people,” he told lawmakers. The Tories were not buying it, and insisted Corbyn should apologize to May.

The incident provoked uproar at the end of a fraught and bad-tempered year in U.K. politics in which May’s government has repeatedly clashed with Parliament over her Brexit plans. The Commons has been in a frenzied state for weeks after a series of tense encounters over the U.K.’s divorce from the EU and an attempted leadership coup against May.

The angry scenes will do little to help the prime minister secure the cross-party agreement she wants for her deal with Brussels, although she won support from politicians on her own side who are usually among her fiercest Brexit critics.

The row erupted after May finished her final session of prime minister’s question time on Wednesday afternoon. Towards the end of her session, May was asked by a Tory if calling someone a “stupid woman” was acceptable — without Corbyn being named.

“Everybody in this house — especially on this 100th anniversary of women getting the vote — should be encouraging women to come into this chamber and should therefore use appropriate language,” the prime minister said.

Video of Corbyn’s muttered comment was spreading on Twitter and a succession of Tories then raised the issue with Commons Speaker John Bercow, demanding that he investigate.

Bercow eventually agreed to review the film of Corbyn’s remark, with the aid of “lip speakers.” Updating Parliament three hours later, Bercow said he could see why people thought Corbyn had used the words “stupid woman,” but it was impossible to be certain. The Labour leader — like all “honorable” members of Parliament — deserved to be taken at his word, the Speaker said.

When it came, Corbyn’s denial carried no weight with Conservative Cabinet minister Andrea Leadsom. She said the country would draw its own conclusions and she deeply regretted the fact that Corbyn had not “seen fit to apologize.”

The Conservatives are unhappy with what they view as Bercow’s pro-Labor bias, despite the fact that he stood as a Tory member of Parliament, and he has had a long-running feud with Leadsom.

Conservatives then turned their fire on Bercow, who has faced accusations of bullying by his staff. Tory lawmaker Vicky Ford said the speaker had himself use the phrase “stupid woman.” Bercow reacted with barely contained anger, wagging his finger at Ford and denying the allegation against him.