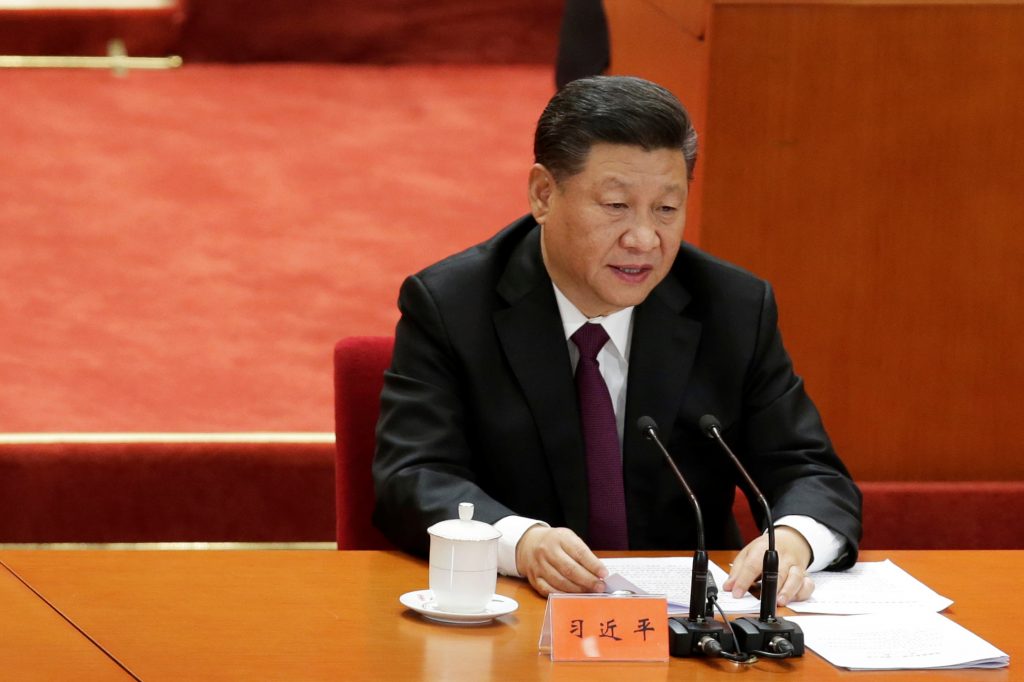 Anyone betting that Chinese President Xi Jinping would back down quickly in a trade war with Donald Trump better think again.

Xi told a Beijing crowd, including some of China’s most influential political, military and business figures, on Tuesday that the country’s growing wealth and power had validated the Communist Party’s — and thus his own — leadership. “No one is in the position to dictate to the Chinese people what should and should not be done,” Xi said.

Xi’s speech — an 80-minute recitation of party achievements — outlined no new economic policies that might assuage investor concerns about market access or the slowing economy. Instead, he reaffirmed China’s pursuit of “indigenous innovation” in “core technologies.”

The event was intended to mark the 40th anniversary of Deng Xiaoping’s “Reform and Opening Up,” a campaign that unleashed an economic boom that helped China outlast the Soviet Union and become the world’s second-largest economy. But coming at the end of Xi’s most tumultuous year since taking power in 2012, it also served to assert his own rule at home and push back against critics abroad, such as the U.S. president.

Over the past 12 months, Xi pushed through a repeal of Deng-era term limits — the sole legal check on his tenure — only to find himself locked in an unprecedented trade war with Trump. He decided to play down plans to dominate high-tech industries and revise his signature Belt and Road trade-and-infrastructure initiative amid whispers about whether Xi had prematurely abandoned Deng’s advice for China to hide its strength and bide its time.

“2018 has been a very difficult year for Xi Jinping,” said Trey McArver, co-founder of Beijing-based research firm Trivium China. “The question going forward is how the system responds to all these troubles bubbling up. Will the system adjust? Or will these problems open up cracks in the system and undermine Xi’s authority and his grand project?”

Rather than retreat, Xi vowed to press on. He offered long passages about the party’s supremacy and the need to promote Marxist ideology.

“What and how to reform must be based on the overarching goal of improving and developing the socialist system with Chinese characteristics, and modernizing the country’s governance system and governance capacity,” Xi said. “We will resolutely reform what should or can be changed, but will never reform what cannot be changed.”

The events cast a different light on recent Chinese efforts to patch up frayed ties with rivals such as India and Japan, or tone down initiatives that have drawn U.S. criticism, like Made in China 2025 and the Belt and Road. Viewed through the lens of Xi’s rhetoric to his own party, they seem more like tactical shifts to minimize conflict than course corrections.

Indeed, Xi has so far managed to consolidate more power than any Chinese leader in a generation and keep the country’s economic slowdown from getting out of control. His gestures on trade were enough to secure a 90-day tariff ceasefire from Trump during their summit in Argentina earlier this month.

“Despite significant economic headwinds, including the eruption of a trade war with the U.S., Xi and his economic team managed to steer clear of a significant slowdown or collapse of investor confidence,” said Jude Blanchette, who analyzes Chinese politics at Crumpton Group, an international advisory firm in Arlington, Va. “But for Xi and China’s economy, a crisis averted is but a crisis delayed.”

The boom unleashed by Deng’s reforms helped give rise to many of the problems China faces today, including severe pollution, a mountain of debt and a massive middle class with increasing demands for health care and other services. Failure to control China’s economic slowdown could undermine a key pillar of the party’s rule.

One Chinese official told Bloomberg News that concerns about the economy had deflated public interest in celebrating the anniversary. Many people are worried the private sector is in retreat as the government steers policy support toward state-owned enterprises, said the person, who asked not to be identified discussing their personal views.

China’s rise has also provoked new challenge from the U.S. and other major economies, which increasingly see the country as a competitor, rather than a cheap source of labor and goods. Its military might has spurred an arms build-up among its neighbors.

“China has stepped into the center of global competition for wealth, power and other interests,” said Zhu Feng, dean of the Institute of International Relations at Nanjing University. “Now the biggest problem for China’s foreign policy is being too high-profile. China needs to bear in mind that the point when it becomes a major power is also when other countries start being tough.”